I ARRIVED AT THE METRO station Abbesses by travelling the short, one stop from the neighbouring station, Pigalle, on Line 12.

The Metro from Pigalle to Abbesses:

Thirty-six metres below ground, buried in the former Plaster-of-Paris mines of Montmartre, Abbesses is one of the deepest stations on the Paris Metro network – so deep that a lift is provided to carry passengers to the surface. 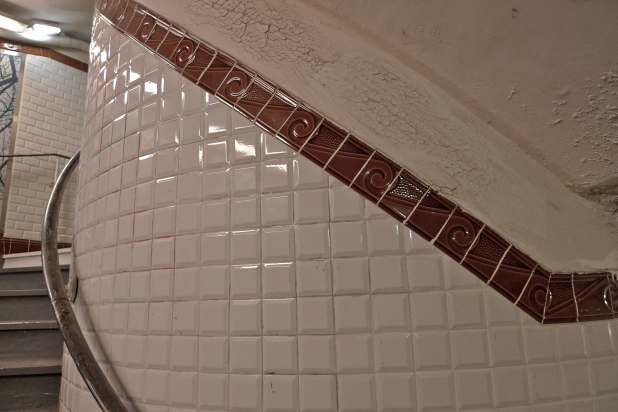 For the more adventurous, it’s possible to do it the hard way by climbing the long, winding, seemingly never-ending, staircase. The effort does have its rewards, like the original tiles lining the walls of the stairwell.

Whether ascending by the lift or the stairs, the rewards waiting upon reaching the surface are certainly worth it.

This has to be the most photographed Metro entrance in the world. It’s one of Hector Guimard’s originals and one of only three that are left – the others being at Porte Dauphine and Place Sainte-Opportune. The Abbesses entrance was originally the entrance to the Hôtel de Ville station but it was moved to the Place des Abbesses in 1970.

The Place des Abbesses takes its name from the former Abbey of the Dames des Abbesses founded as far back as 1133 by Adelaide of Savoy, the wife of Louis VI.  The reputation of the abbey – and of the Abbesses for that matter – waxed and waned over the years but it managed to survive in one form or another until the French Revolution when it was finally suppressed.  Madame de Montmorency-Laval was the last abbess and she came to a sticky end – she was sent to the guillotine in 1794!

If Madame de Montmorency-Laval were with us today, what would she find on the site of her former home?

She would find that there are still ecclesiastical references. The Crypt of the Martyrium, which she would have known well, is the chapel built on the site where, allegedly, Denis, Bishop of Lutetia, (later Saint Denis) was decapitated in 250AD. She would be pleased to know that the chapel is still alive – but only open to the public on Friday afternoons. She would find the Eglise-Saint Jean-de-Montmartre, a more recent ecclesiastical structure, dedicated to Saint John the Evangelist in 1904.

She would be very familiar with the cobblestones in the Place des Abbesses and I like to think that she would approve of the rather delicate sound of traffic slowly rumbling over the pavé which has a curiously romantic feel to it.

She would no doubt find the sound of today’s street musicians in the Place des Abbesses curious but, since music was an integral part of abbey life, maybe she would not entirely disapprove.

I like to think she would also approve of the contemporary creation – the “I Love You” wall – a wall of deep blue glazed tiles with dashes of pink inscribed with the words “I Love You” in over three hundred languages.

All in all, I think Madame de Montmorency-Laval, like the flocks of tourists who visit each year, would be well pleased with today’s Place des Abbesses.