I HAVE EXCITING NEWS from Line 1 of the Paris Metro!   The 725,000 passengers who travel on this line every day, including me, are now enjoying new, driverless, automatic trains. And what’s more, we have new, up-market  ‘Mind the Gap’ announcements as well. 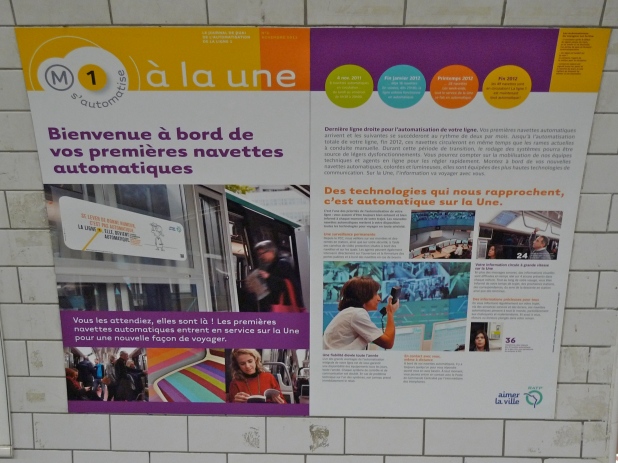 In November last year, the first automatic trains went into service on Line 1.  RATP, (Régie Autonome des Transports Parisiens) the Paris mass transit authority, sent me a letter to tell me about this and to say that two new automatic trains a month will be introduced so that by the end of 2012 Line 1 will be completely automatic.

Paris already has of course the world’s first fully automated Metro line, Line 14, which runs from Saint Lazare to Olympiades on a north-west south-east diagonal across the centre of Paris. The conversion of Line 1 is another first. It’s the first time that an old, working Metro line (Line 1 was built in 1900) has been converted to be fully automatic without any disruption to the service. That’s quite an achievement. The work to reconfigure the platforms and to install the sophisticated electronics began in 2008 and it’s been a long process. I know because I’ve watched it all unfold. Sometimes, it seemed that the work would never end.

The new automatic, air-conditioned trains are built by Alstom and they have been designated with the appellation, MP 05. MP (matériel pneus) means that they have rubber tyres. 05 refers to the date of the original tender for these trains that was issued in 2005. These new trains are replacing the existing MP 89’s, which I’ve become very fond of since I’ve been here. The good news is that the MP 89’s will have an afterlife. As they’re removed from Line 1 they will see many more years of service on Line 4. 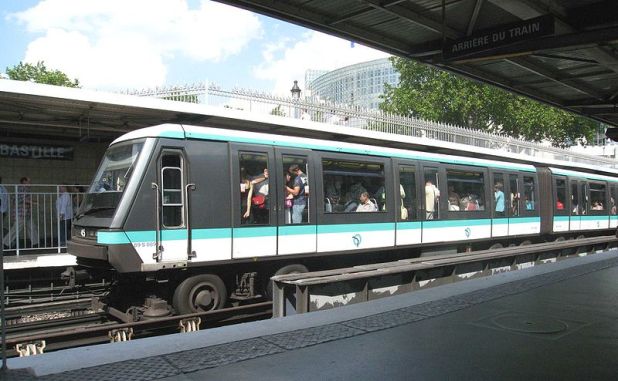 As if all this wasn’t exciting enough I have even more exciting news! The new, automatic trains on Line 1 have new announcers and a special new announcement for ‘Mind the Gap’.

A source inside RATP, the man responsible for the sound identity of the Paris Metro, has given me some really interesting information, which I’m delighted to share with you. RATP take their sound identity very seriously. They have introduced foreign languages for some announcements and they pay particular attention to their authenticity by using native speakers. French and English are always present but they add other rotating languages, German, Spanish, Italian and Japanese.

There we go, ‘Mind the Gap’ in French, English, German and Japanese.

The male voice used in this announcement is a British RATP staff member working in the marketing department. The French female voice is a former metro train driver on Line 1.

Well done RATP not only for excelling at converting Line 1 to automatic without any disruption but also for having the foresight to give such a high profile to the sound identity of the Paris Metro.

I can’t help wondering what Fulgence Bienvenüe, the one-armed railway engineer and ‘Father of the Metropolitan’ would make of it all. I like to think he would approve.

To hear more of ‘Mind the Gap’ click on the links below:

Mind the Gap – An Update: