THE ‘END OF THE LINE’ STRAND in my Paris Soundscapes Archive is dedicated to the sounds I capture in and around each terminus station on the Paris Métro system. From time to time I share the atmosphere of some of these terminus stations and their surroundings on this blog.

However, to make this ‘End of the Line’ segment more manageable I will divide it into two parts. Today’s post, Part 1, explores inside La Défense – Grande Arche station and the next post, Part 2, will explore the sounds around the station in what is said to be Europe’s largest purpose-built business district containing most of the Paris urban area’s tallest high-rise buildings.

La Défense looking to the West

Because it serves the largest business district in the Paris region, La Défense – Grande Arche is a multi-functional transport hub. Not only is it home to the western terminus of Métro Line 1, it also houses a Transilien suburban train station, an RER station, a tram station and a bus station, all designed principally to handle the huge number of commuters who travel to and from work in La Défense each day.

The business district of La Défense is so big that it actually has two Métro stations. Esplanade de la Défense is the first of these so it was approaching here on my way to La Défense – Grande Arche that I began my sonic exploration.

Opened on 19th July 1900, Métro Line 1 is the oldest line on the Paris Métro network. Built by the one-armed railway engineer Fulgence Bienvenüe, to connect various sites of the 1900 Exposition Universelle, the original line comprised eighteen stations between Porte Maillot and Porte de Vincennes. In 1934, the line was extended to the east from Porte de Vincennes to Chateau de Vincennes and in 1937 it was extended to the west from Porte Maillot to Pont de Neuilly. In 1992, Line 1 was extended again to the west from Pont de Neuilly to La Défense. In 2007, work began to automate Line 1 and on 15th December 2012 a fully automatic service was introduced. Today the 16.5 km Métro Line 1 is the most utilised line on the Paris Métro network handling over 600,000 passengers per day. 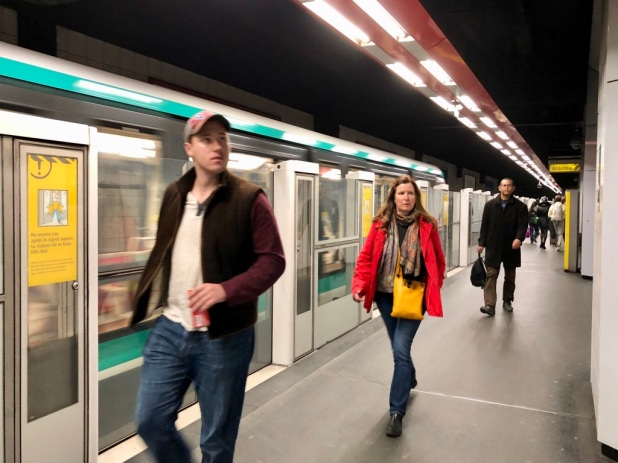 Arriving at the La Défense – Grande Arche terminus, I alighted and made my way up to the cavernous station concourse. This used to be a dingy, inhospitable place but a recent coat of paint has brightened it up a bit and now, the usual suspects cater for the commuters. 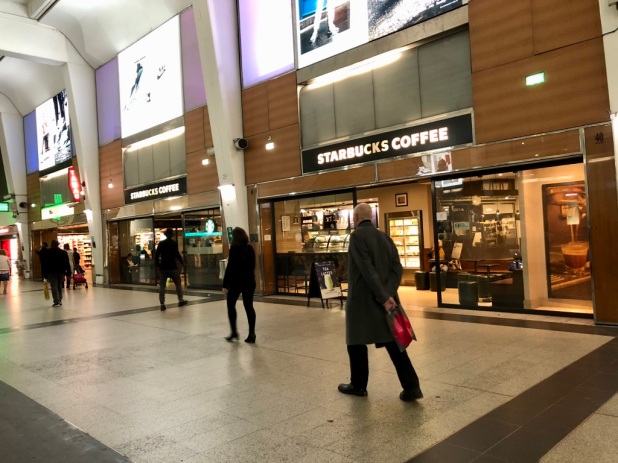 From the main concourse I headed off to explore the tram station, home to Tram Line T2. 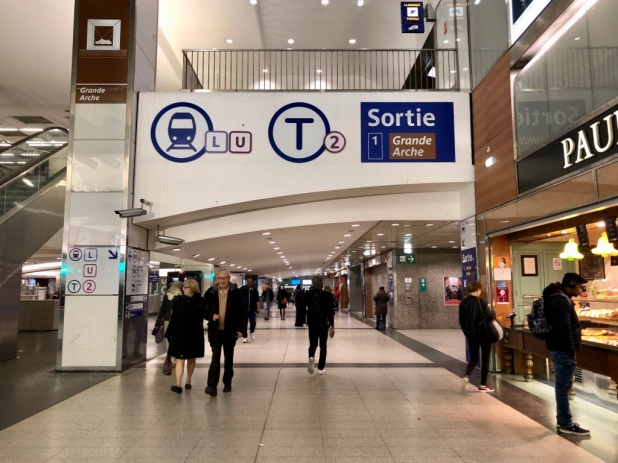 Tram Line T2, linking the south-west suburbs of Paris with La Défense, began operating in 1997. The tramway was built on the former train line thus making it independent from the road.  An extension In 2009 added five more stations towards the south, extending to Port de Versailles and in November 2012, another 4.2 km northern extension beyond La Défense to Bezons added a further seven stations.

The extensions to Tram Line 2 are part of a larger scheme in the Île-de-France aiming to increase connectivity of the suburbs by creating up to 70km of bus and tramways around Paris.

The Transilien suburban trains operate from platforms adjacent to but separated from the tram platforms.

While the public address announcements in the main station concourse are almost unintelligible, those in the tram station are much better – even if they do seem to appear end-to-end.

From the tram station I went back to the concourse and on to the RER station and RER Line A.

With more than one million passengers a day, RER Line A is the busiest Parisian urban rail line.

With the section of the line running through the city centre closed each summer for maintenance and construction work, much to the dismay of commuters, and with the line badly affected by alerts for suspect packages, which have doubled in the last year, it’s hardly surprising that, according to a 2017 survey by transport authorities in the greater Paris region, trains on RER Line A run on time only 85.3% of the time. Add to that grossly overcrowded trains and the occasional strike and RER Line A can sometimes be a challenge.

Despite the introduction of advanced traffic control systems that enable extremely short spacing between trains during rush hour (under 90 seconds in stations, under 2 minutes in tunnels) together with several upgrades in rolling stock, ever-increasing traffic volume and imminent saturation continues to blight the line.

Still, it’s not the worst performing RER line. According to the 2017 survey, that accolade goes to RER Line D.

The sounds of La Défense – Grande Arche presented in this post are a distillation of my original ninety minute recording now consigned to my Paris Soundscapes Archive but I hope they give you at least a flavour of the sonic tapestry hidden below the monumental Grande Arche de la Défense. In Part 2, I shall explore the sounds up on the surface.

Even with this extensive transport facility complete with its coffee shops and fast food outlets, travelling to and from La Défense during the rush hour each day can be a grim experience. I know, I did it for thirteen years!