Posts from the ‘Métro Line 4’ Category

The Métro Station ‘Cité’ and its Sounds

WITH ITS UBIQUITOUS Hector Guimard ‘entourage’ entrance, the Métro station Cité is the only Métro station on the Île de la Cité, one of the two islands on the Seine within the historical boundaries of the city of Paris.

The entourage entrance was the most common of Guimard’s Métro entrances. Built in the Art Nouveau style the entrance has waist high cast iron railings around three sides with symmetrical raised orange lamps designed in the form of plant stems, with each lamp enclosed by a leaf resembling a brin de muguet, a sprig of lily of the valley. Between the lamps is the classic Metropolitain sign.

Of the 154 entourage Métro entrances built, some 84 still survive on the Paris streets. 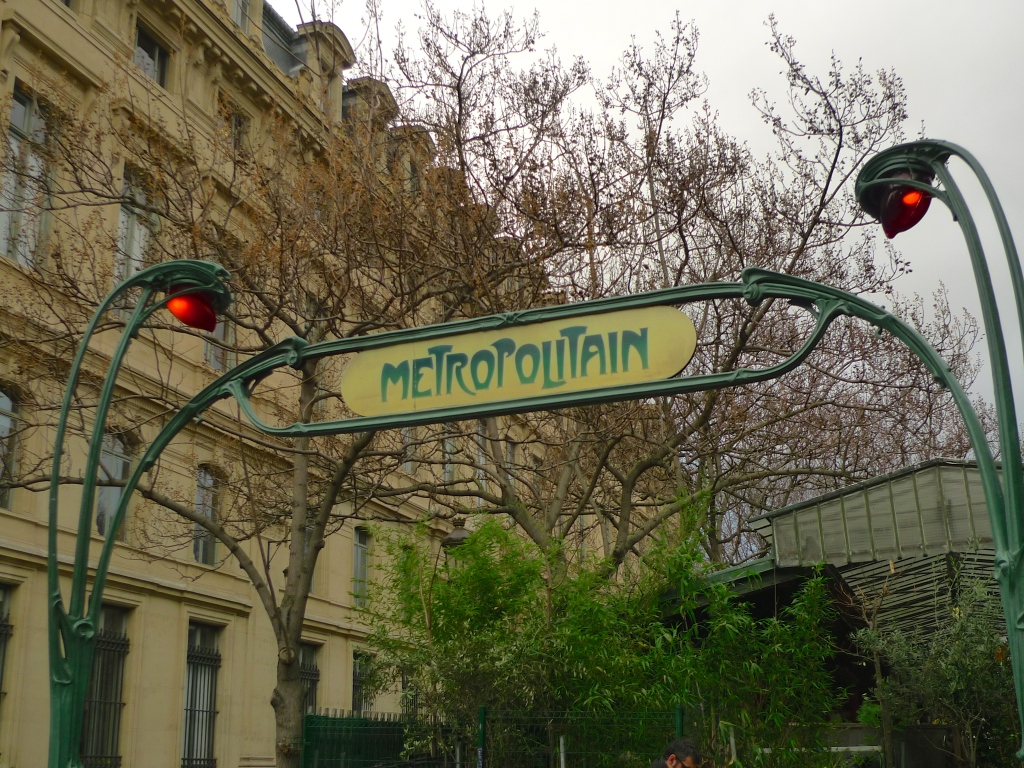 With the Cathédrale Notre-Dame de Paris on one side and the medieval gothic chapel, Sainte-Chapelle, the Conciergerie (a former prison) and the Palais de Justice (all formerly part of the Palais de la Cité, a Royal Palace from the 10th to the 14th century) on the other, Cité Métro station lies at the historical centre of Paris.

The station is on Line 4 of the Paris Métro system, the line that travels 12.1 km across the heart of the city connecting Porte de Clignancourt in the north and, since 2013, Mairie de Montrouge in the south. Until the extension to Mairie de Montrouge was opened, the southern terminus of Line 4 was the original terminus, Porte d’Orléans.

Métro Line 4 was the first line to connect the Right and Left Banks of the Seine via an underwater tunnel built between 1905 and 1907. At the time, this was some of the most spectacular work carried out on the Paris Métro system. 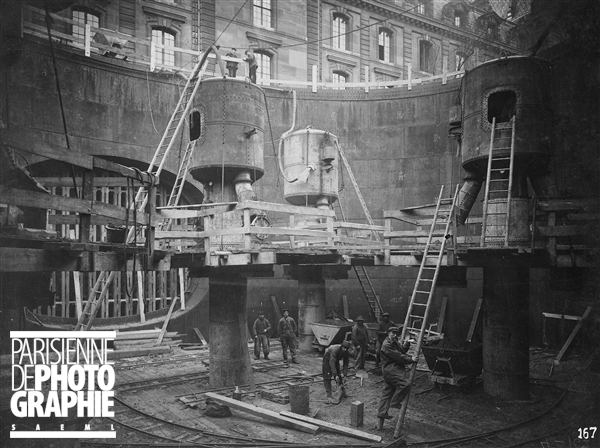 The Seine crossing was commissioned on 9th January 1910 … only to be closed a few days later, a victim of the great Paris flood of 1910.

Unusually for the Paris Métro system, the station only has one entrance, at 2 Place Louis Lépine and, unlike other stations on Line 4, the platforms are 110 m in length, longer than the 90-105m platforms at other stations.

Because of the station’s depth, passengers must walk down to a mezzanine level, which contains the ticket machines, and then down another three flights of stairs before reaching platform level. This is fine on the way down but, as I know all too well, it can be a challenge on the way up! 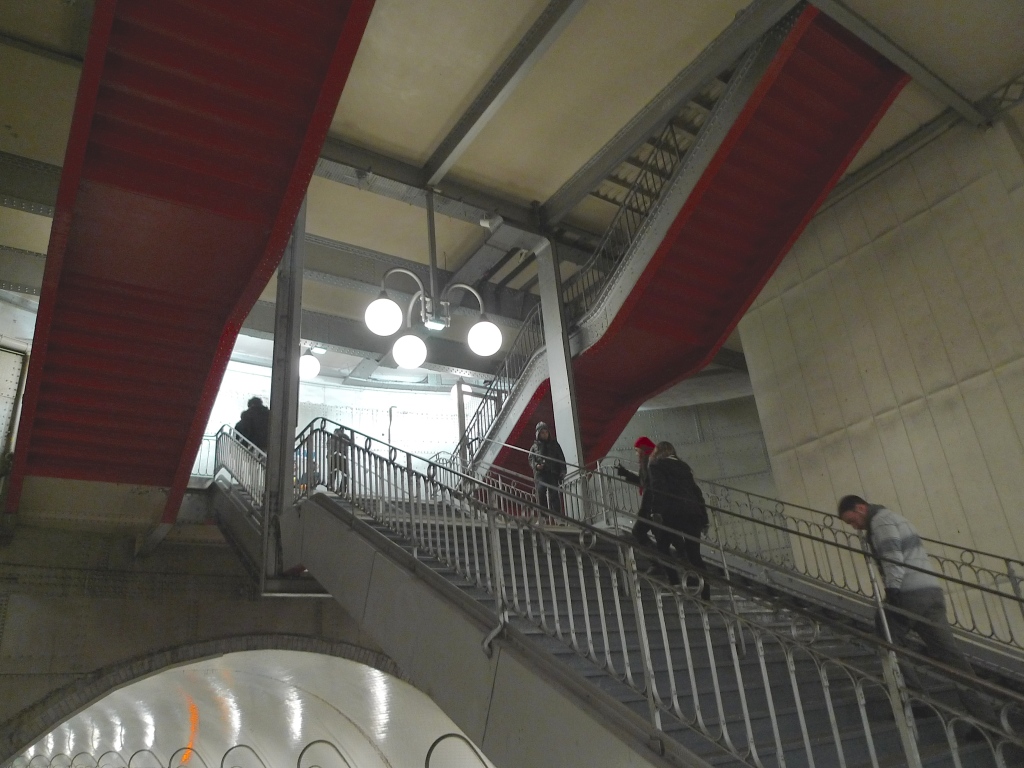 The walls of the station at the entrance at the top and along the platforms at the bottom are lined with conventional white Métro tiles but the decoration of the space in between is curious. 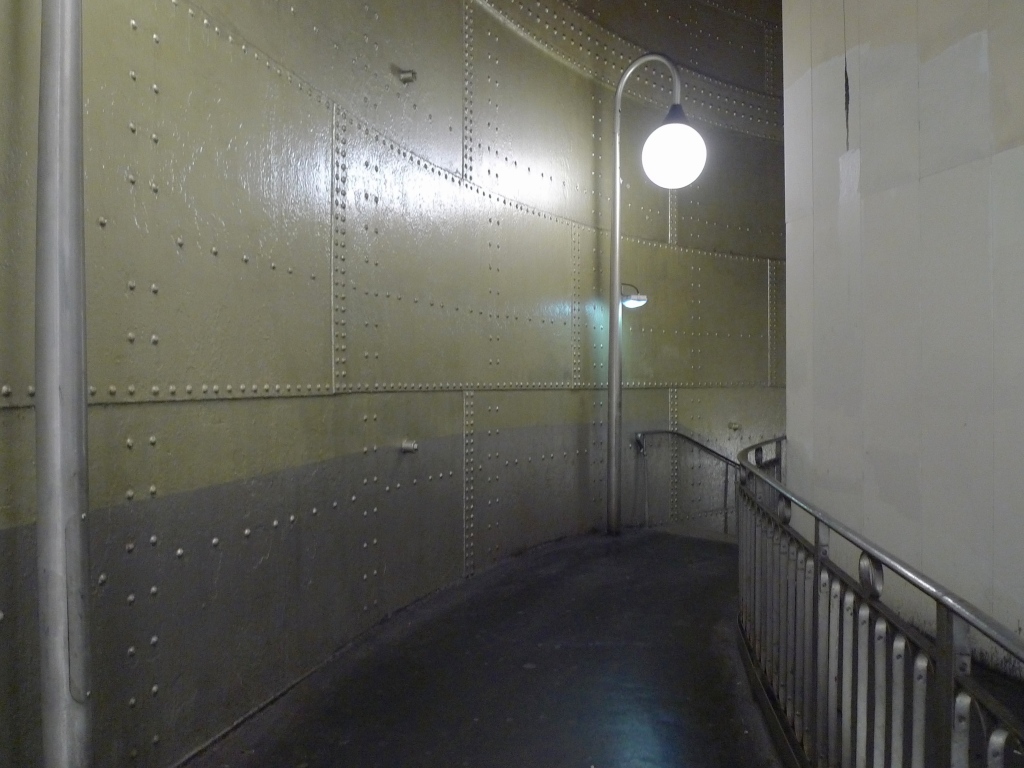 Here, the walls are lined with large metal plates with oversized rivets. I have no idea when these were installed or why, but they give the impression of walking through a huge metal tank.

The station platforms are lined with overhead lamps reflecting the style of the original station lamps.

Until recently, Métro Line 4 had the distinction of using the oldest trains on the Paris Métro network, the MP 59. 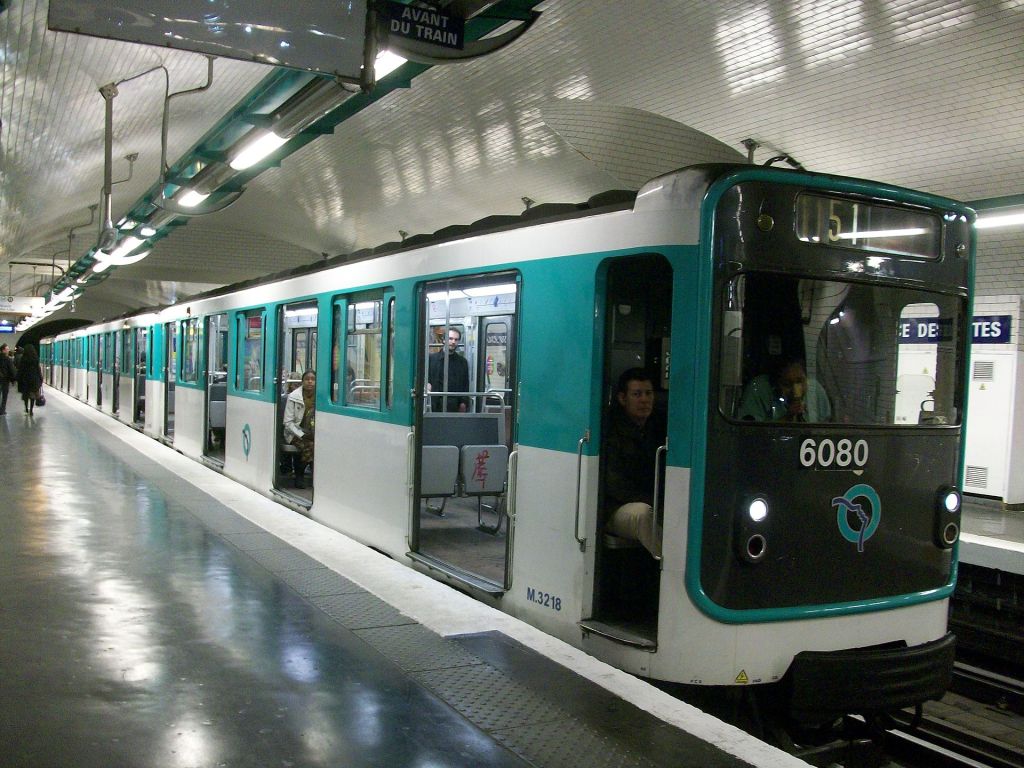 After serving for almost fifty years, these trains were withdrawn from service during 2011 and 2012 and replaced with the MP 89 CC trains from Line 1 when that line was automated.

I began recording these sounds at the Cité Métro entrance in Place Louis Lépine, beside the flower market. I went down the steps to the mezzanine level, passed through the ticket barrier, and then descended two more flights of steps. From here, it’s possible to see and hear the trains passing below. I walked along the narrow passageway beside the riveted metal plates and down some more steps to the platform.

Watching and listening to the MP 89 trains entering and leaving the station was quite nostalgic for me since I know these trains so well. When they operated on Line 1, the nearest line to my home, I rode on these trains almost every day for the best part of thirteen years.

I was pleased to see my old friends again at Cité station busy carrying passengers on the second busiest Métro Line in Paris.

Having savoured the atmosphere of the station, all that remained was for me to bid my friends adieu and gird my loins for the climb out of the station back onto the street.

FOR THE SECOND time in the last three months I’ve been to see a newly opened Paris Métro station. In December I went to have a look at Front Populaire, the new terminus at the northern end of Line 12.  That station was opened on 18th December and it became the 302nd station on the Paris Métro network.

Last week, I crossed to the south of Paris to visit the latest addition to the Paris Métro network, the 303rd station, Mairie de Montrouge, which now becomes the new southern terminus of Line 4. The station was officially opened on 23rd March by Frédéric Cuvillier, Junior Minister for Transport and the Maritime Economy.

At a cost of over €152 million, the extension is 780 metres long and the work took five years to complete.

In yet another example of RATP’s joined up thinking, Mairie de Montrouge station links with three RATP bus routes, 68, 126 and 128 as well as with the SQYBUS (Saint-Quentin-en-Yvelines) network.

Inside, the new station has a bright and airy feel to it in part due to the use of natural light coming through the glass panels set into the roof which also form part of the concourse outside the station.

Glass panels set into the concourse outside which provide natural light inside the station:

The seats both inside and outside are quite comfortable despite their rather futuristic look. 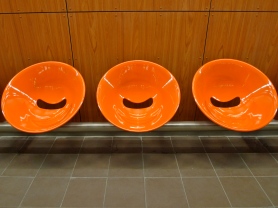 The station has two entrances at the moment. The main entrance is on the parvis of l’Eglise Saint-Jacques le Majeur.

There is a second entrance at Place du Général-Leclerc and a third entrance, opposite the Mairie, is under construction and is due to open next year.

Extending the line to Mairie de Montrouge is only the first stage of the southern extension of Line 4. In 2014 work will begin on a further extension with two new stations, Verdun Sud and Bagneux. These stations are planned to open in 2019.

Until 2011, the trains on Line 4, the MP 59, were the oldest on the Paris Métro system, some of them 50 years old. During 2011 and 2012 newer MP 89 trains, formerly running on Line 1 but now redundant since the automation of that line, were cascaded to Line 4 making for quicker and more comfortable journeys.

With 154 million passengers a year, Line 4, the second busiest line on the system after Line 1, now has faster and more comfortable trains taking passengers further than ever.