Posts from the ‘Exhibitions’ Category

Henri Cartier-Bresson at the Centre Pompidou

THE CITY OF PARIS has never been shy about celebrating the work of the great twentieth-century photographers who have lived and worked here. 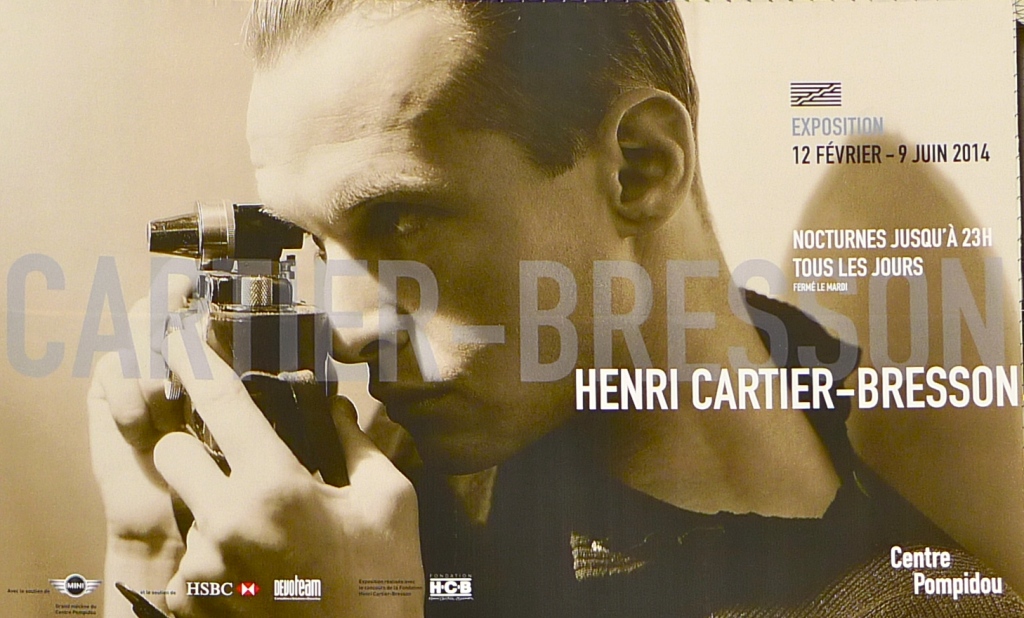 Currently, the Hôtel de Ville is staging another exhibition this time celebrating the work of the renowned photographer, Brassaï. Although Gyula Halász (Brassaï was a pseudonym) was Hungarian, he lived in Paris from 1920 until his death in 1984.

This exhibition, “Brassaï, Pour l’amour de Paris” or “Brassaï – For the Love of Paris”, recounts the extraordinary story of one man’s passion: that which united Brassaï with the nooks and crannies of the French capital but also with intellectuals, artists, large families and prostitutes – all those who have made Paris the mythical place it is.

I went to the Doisneau exhibition in 2012 and to the Brassaï one earlier this year and I was captivated by them both.

I make no secret of the fact that in the work I do recording the urban soundscapes of Paris I take enormous inspiration from the great twentieth-century Parisian street photographers. There are many similarities, both technically and artistically, between street photography and urban soundscape recording and I’ve learnt a lot from reading about these artists and studying their work.  It’s not by accident that the strapline to this blog is a quote from Robert Doisneau – “Exploring that gratuitous, never-ending show for which no ticket is needed”, which was how he summed up his work.

And now we are blessed with yet another photographic exhibition in Paris, this time just a stone’s throw from the Hôtel de Ville at the post-modern Centre Pompidou. 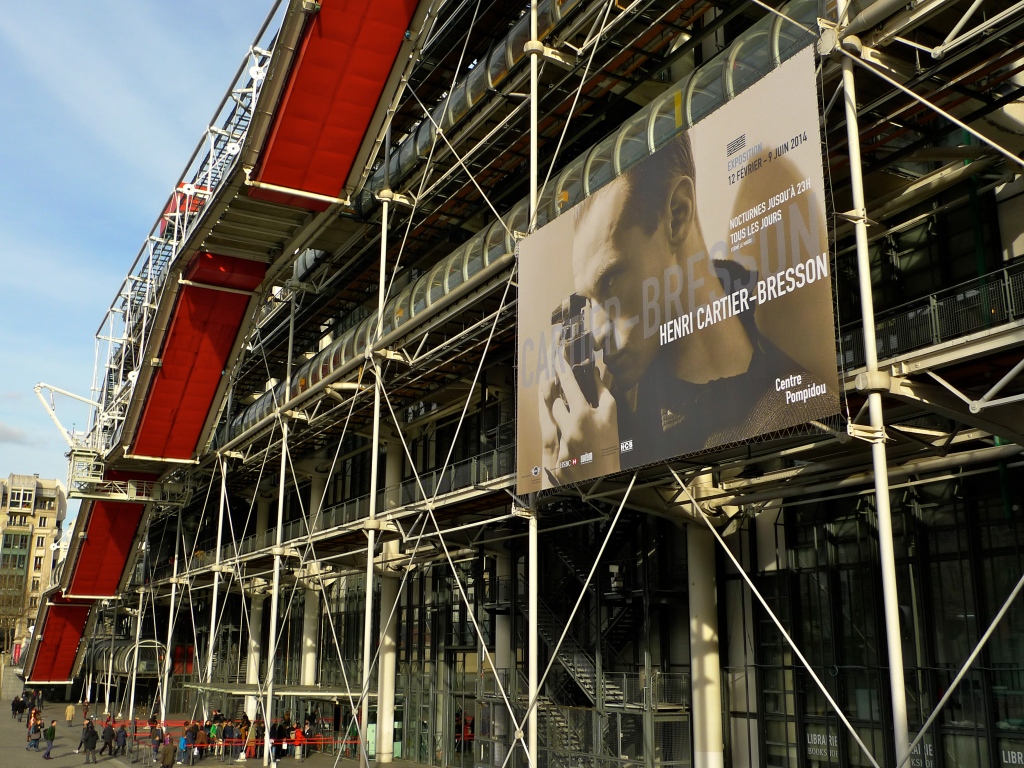 Through more than five hundred photographs, drawings, paintings, films and documents, the exhibition is a completely new retrospective look at the work of Henri Cartier-Bresson, the first in Europe since his death ten years ago.

Simply called, “Henri Cartier-Bresson”, the exhibition, organised with the support of the Henri Cartier-Bresson Foundation, opened on 12th February and it runs until 9th June although, judging by the number of people who were there when I went earlier this week, I wouldn’t be at all surprised if it isn’t extended.

Henri Cartier-Bresson at the Centre Pompidou– Listening to the Pictures:

This retrospective illustrates the depth and variety of Cartier-Bresson’s work and his wide-ranging career as a photographer – one that covered Surrealism, the Spanish Civil War, the Second World War, decolonisation and the Cold War. The exhibition features his iconic pictures but also puts a spotlight on lesser-known images. It reassesses a number of little-known photo reportage works, brings to light collections of paintings and drawings and focuses on Cartier-Bresson’s forays into the world of film. 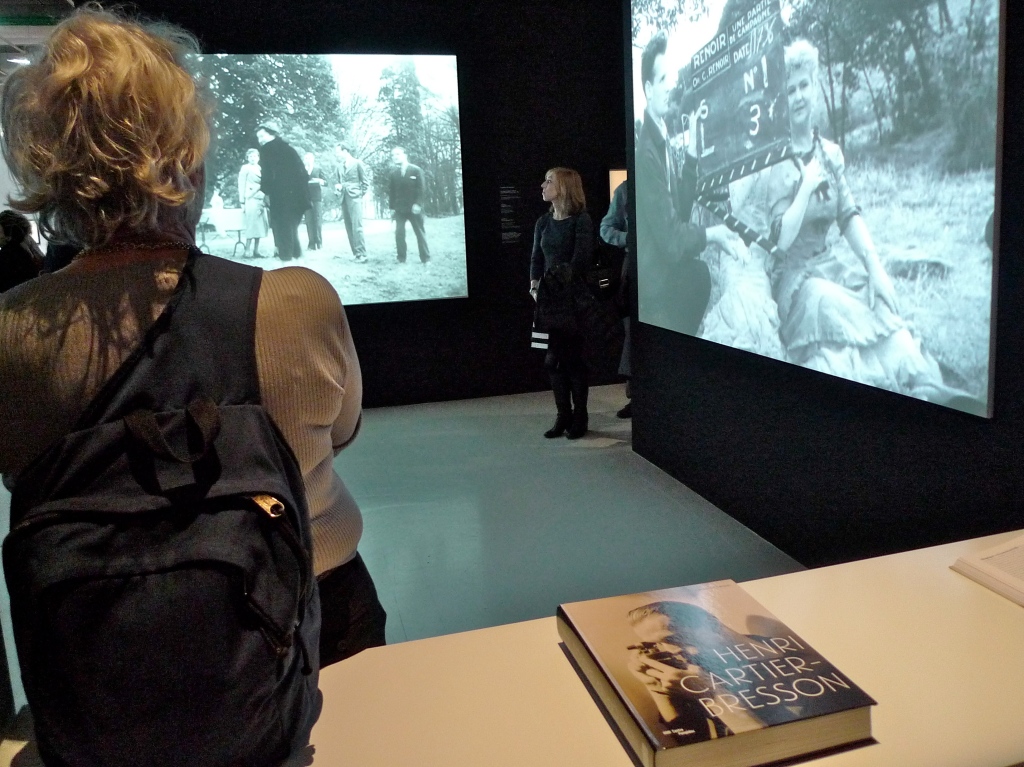 Both chronological and thematic, the exhibition is structured around three main viewpoints: the period between 1926 and 1935, marked by Cartier-Bresson’s contact with the Surrealists, his early work as a photographer and his travels all over the world; a second section devoted to his political commitment when he returned from the US in 1936 until he set off for New York again in 1946, and a third sequence opening with the creation of Magnum Photos in 1947 and finishing with the early 1970s when he stopped doing photo reportage.

Despite moving away from photography Cartier-Bresson’s international renown continued to grow and in France, he embodied, almost alone, the institutional recognition of photography. He spent a great deal of time supervising the organisation of his archives, sales of his prints and the production of books and exhibitions. Even though he had officially stopped being a photographer, he still kept his Leica within reach and occasionally produced more contemplative images. But above all, he frequently visited museums and exhibitions and spent most of his time drawing. 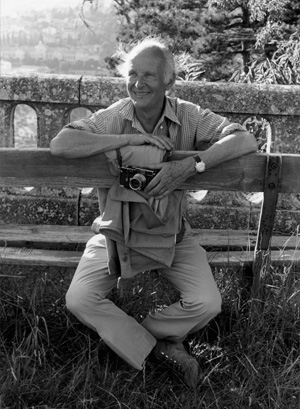 I’ve never considered myself to be a photographer but, as well as recording the sounds of people inside the gallery looking at the exhibits, I did take some pictures at the exhibition and they include some of my Cartier-Bresson favourites. Unfortunately, my absolute favourite and perhaps Cartier-Bresson’s best known image, “Behind the Gare Saint-Lazare” was, rather like the Mona Lisa in the Louvre, submerged in a constant sea of people so although I saw it and pondered it for some time, I wasn’t able to quite capture it for this blog piece.

Here though, are some of the other images I captured. 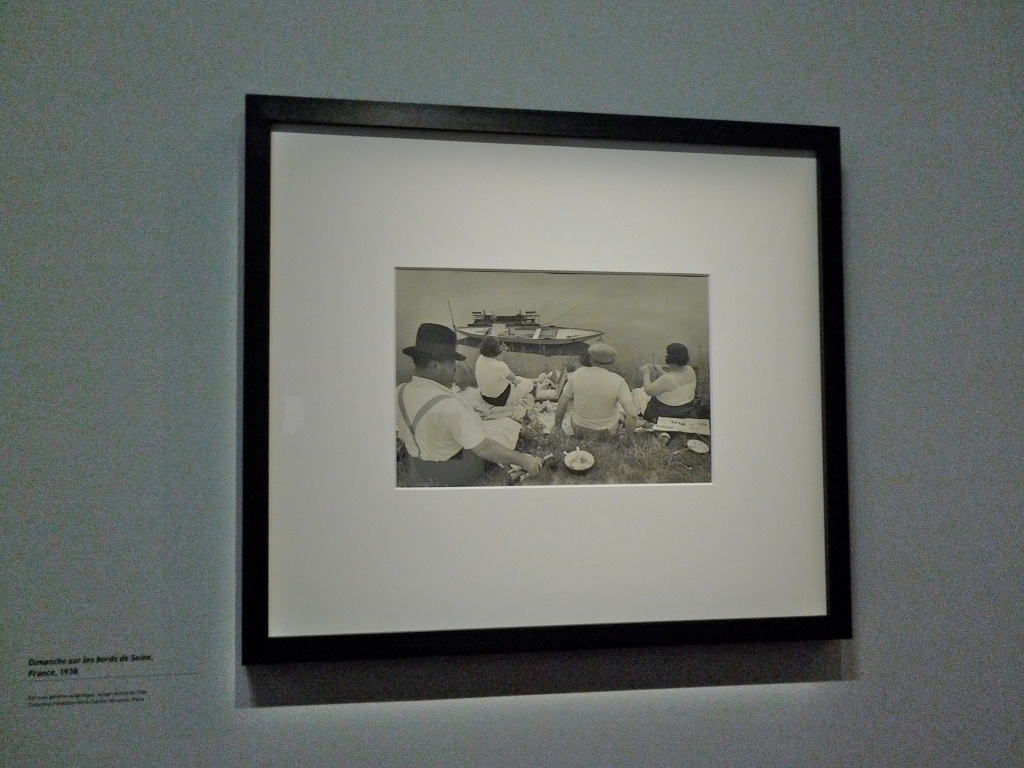 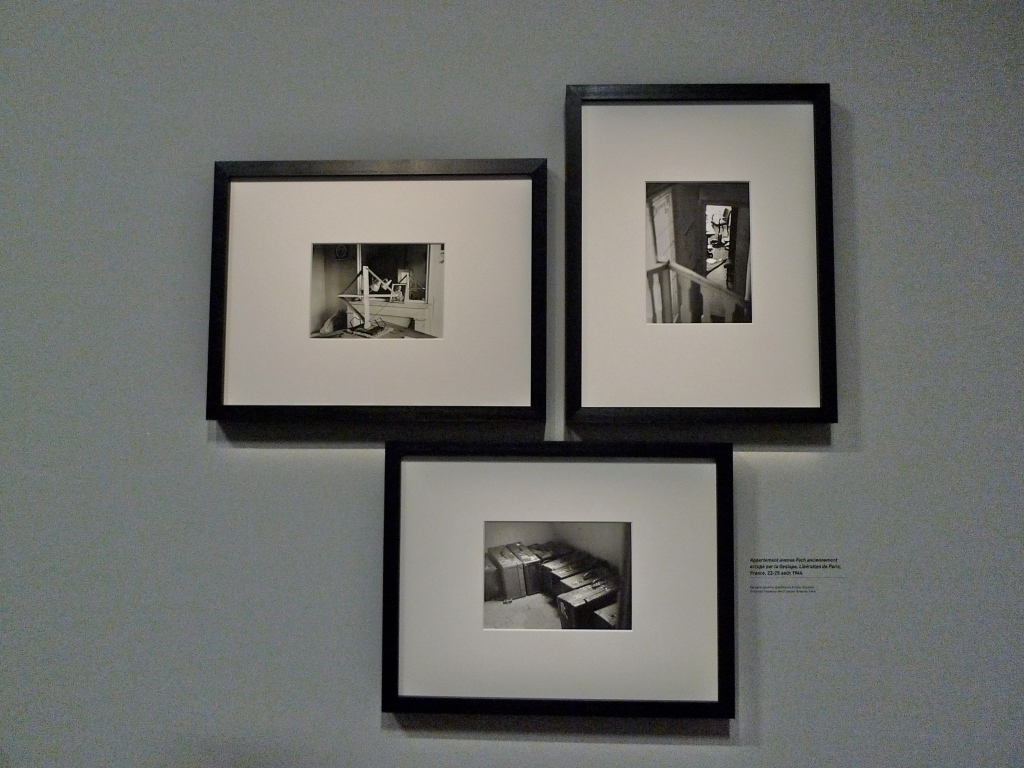 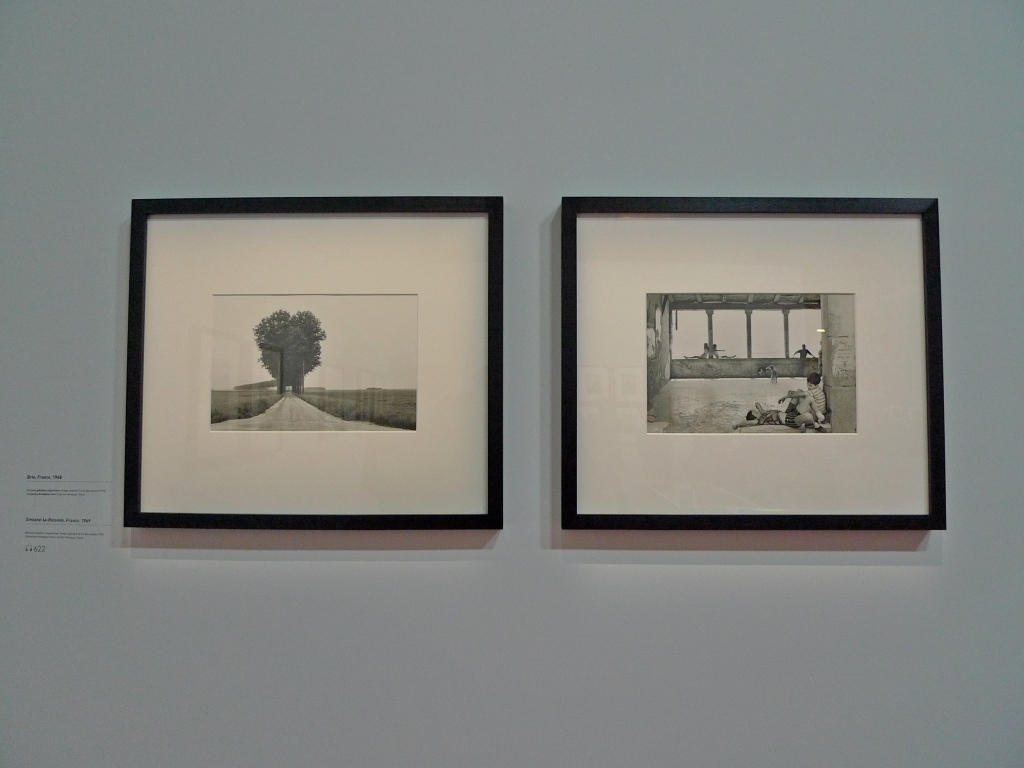 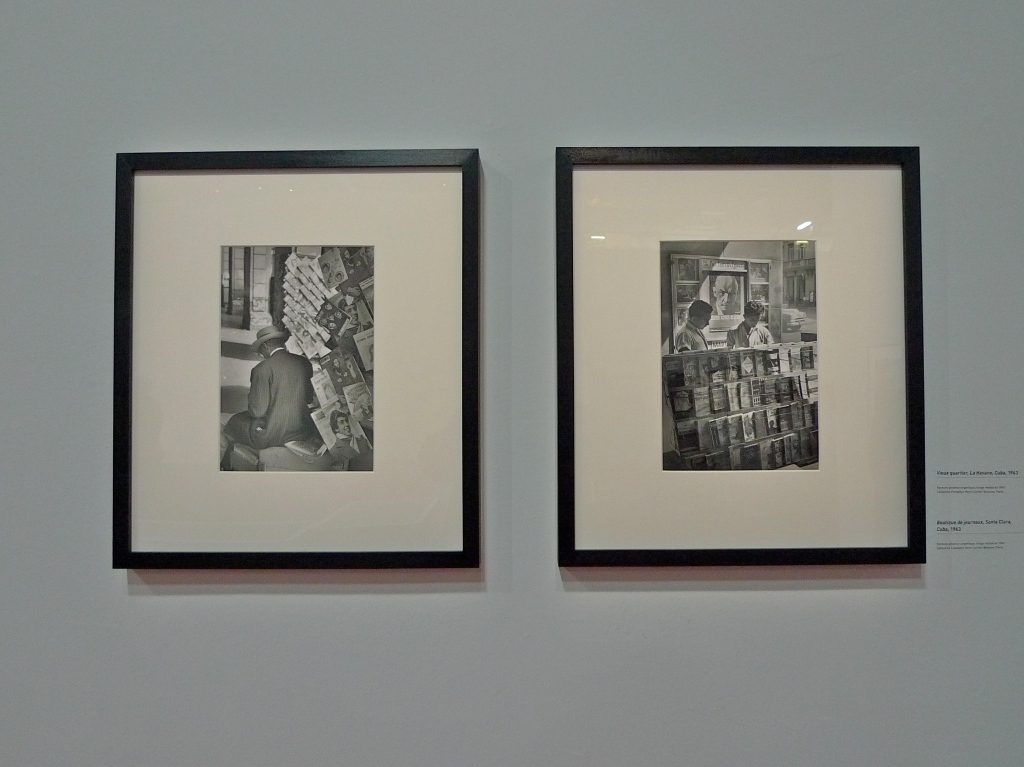 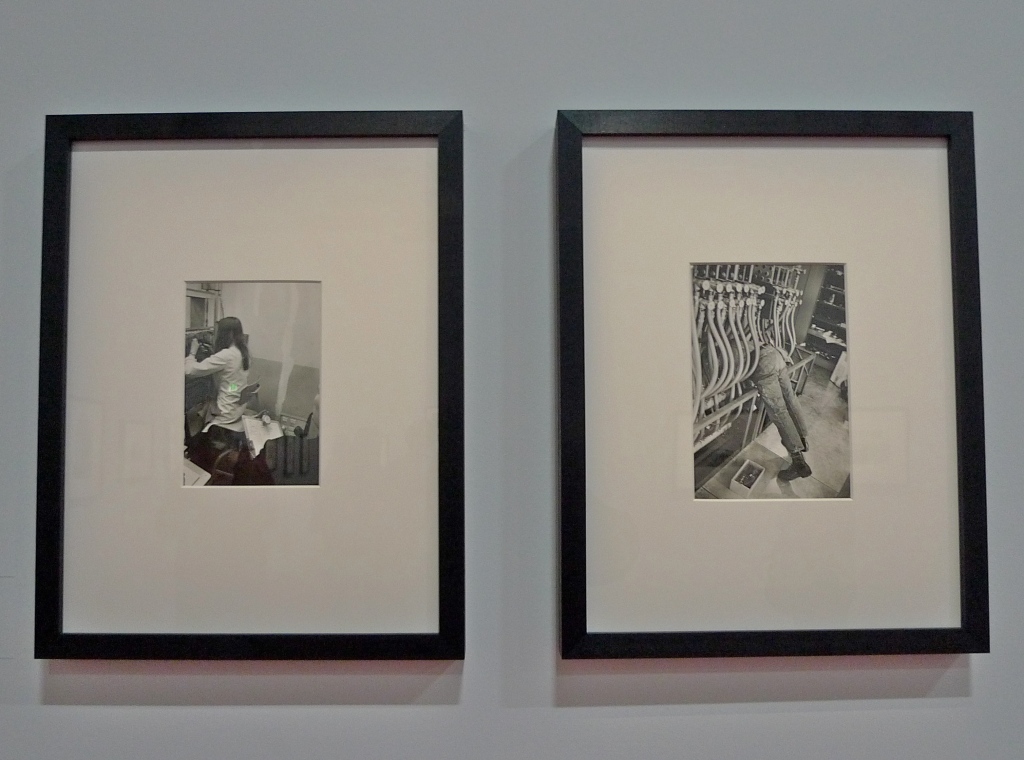 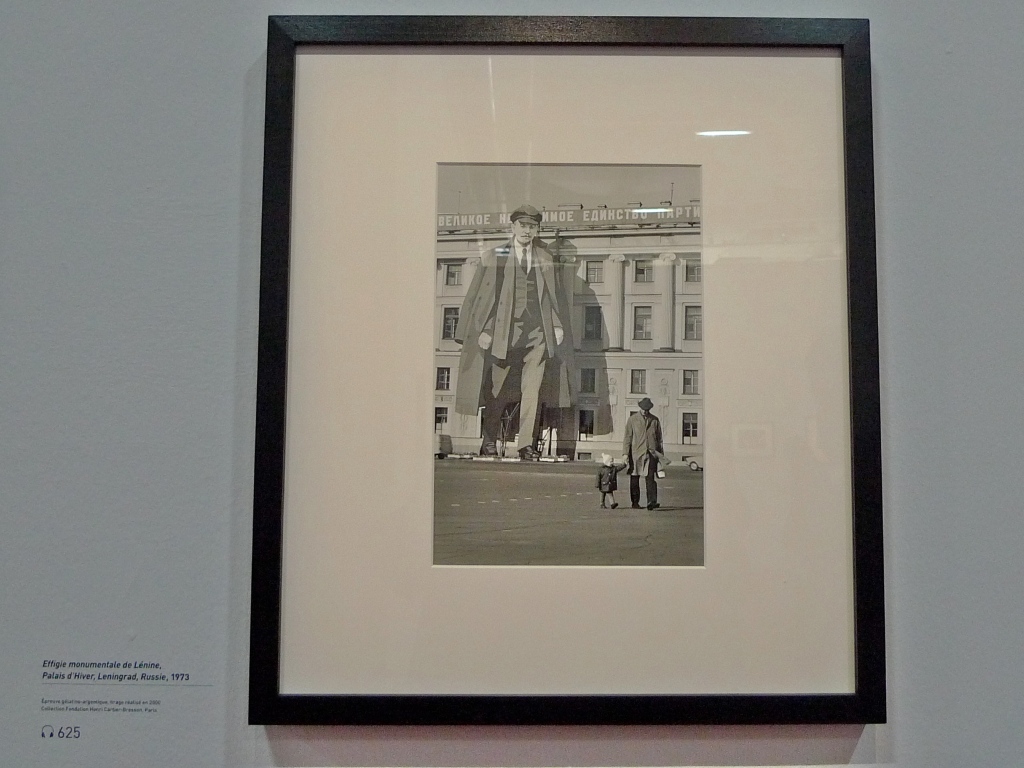 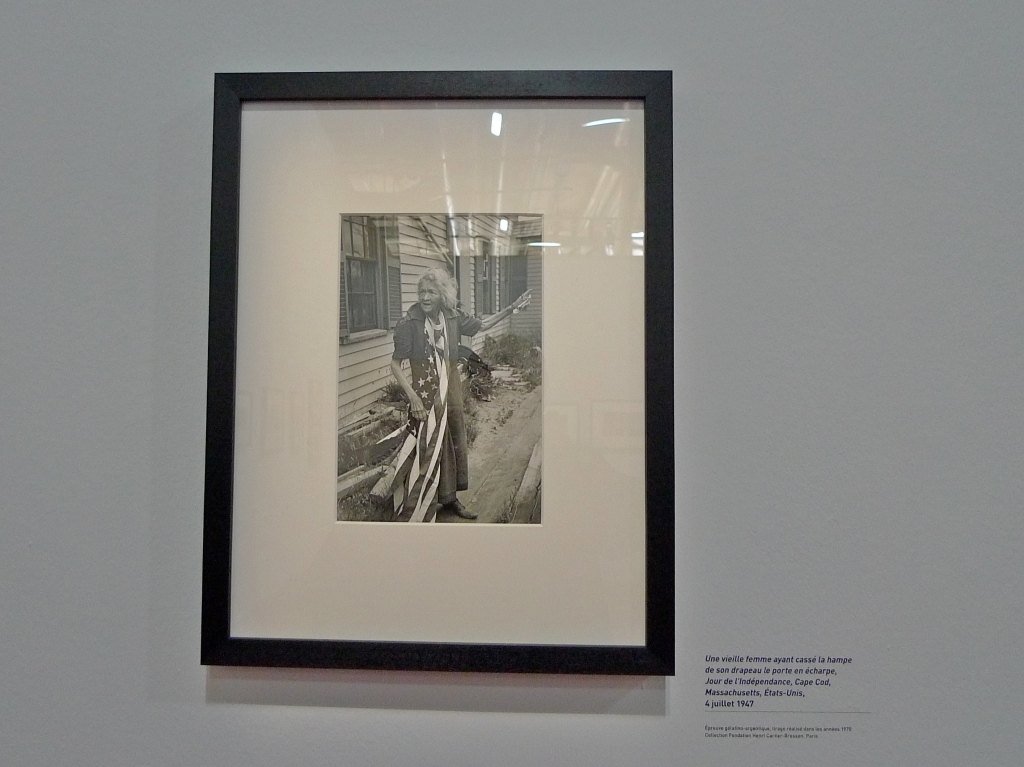 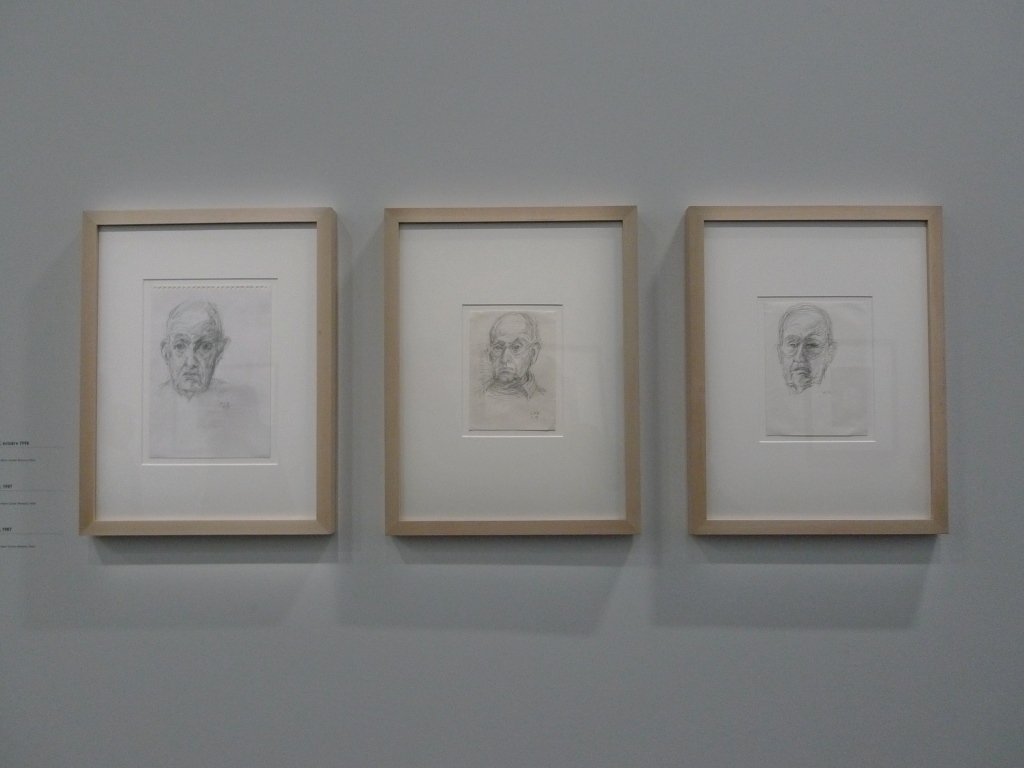 This retrospective illustrates just why Henri Cartier-Bresson became known as “the eye of the century”, one of the great witnesses of our history and why he became, and remains, such a dominating figure in the world of photography.

AS THE VERY SUCCESSFUL Bernice Abbott exhibition comes to a close in the Jeu de Paume, an exhibition of the work of the man who inspired her, Eugène Atget, opens in the Musée Carnavalet. I went along to see it and was enthralled by it. 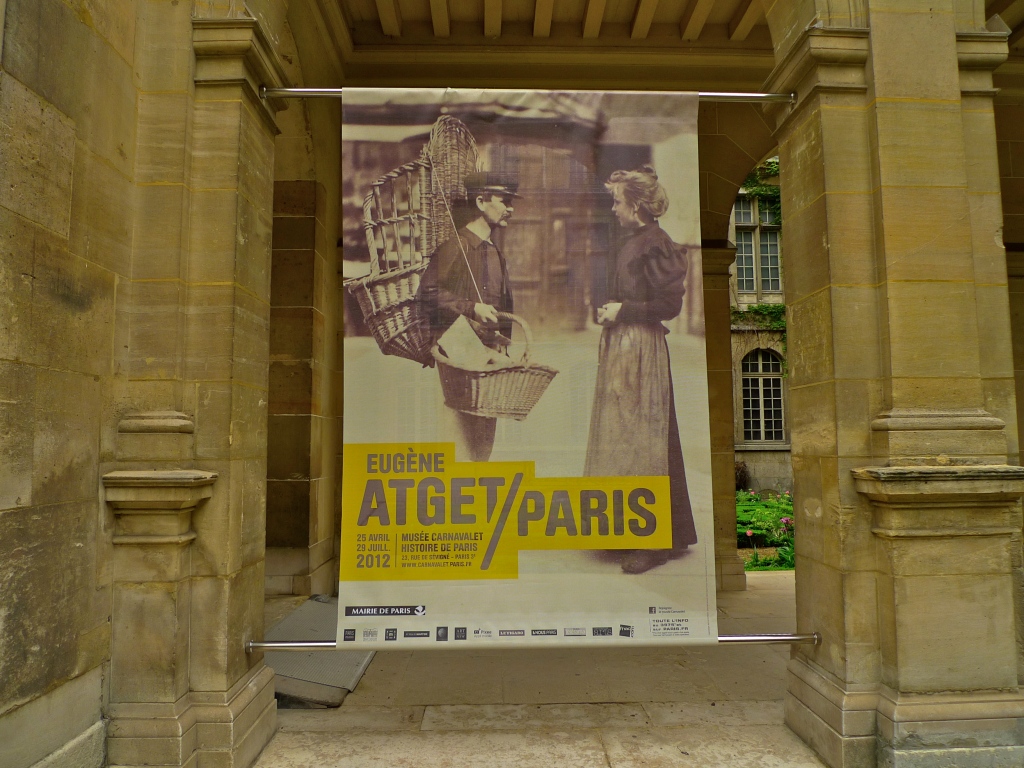 Listening to the pictures:

Atget is somewhat of an enigma. Today he is the most celebrated of all the photographers of Vieux Paris, Old Paris, but when he died in 1927 scarcely anyone had heard of him. 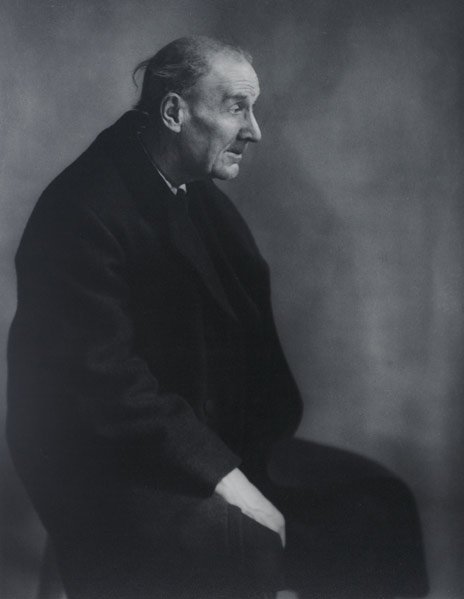 He was born in 1857 in modest circumstances in Libourne in the Gironde. As a young man he seemed to fail at everything he turned his hand to. He tried acting, soldiering and painting but failed at all three. His only success was to meet and to marry Valentine Delafosse-Compagnon, an actress who was devoted to him.

Atget and Valentine moved to Paris and around 1890, in order to make a living, he took up photography. Initially he produced study material for artists, images of trees, flowers and various objects for artists to incorporate into their compositions. It was towards the end of the 1890’s that he changed direction and set out to make a systematic photographic record of Paris. He photographed everything – the streets, the shops fronts, the tradesmen, the interiors and architectural details – he captured every aspect of Vieux Paris. 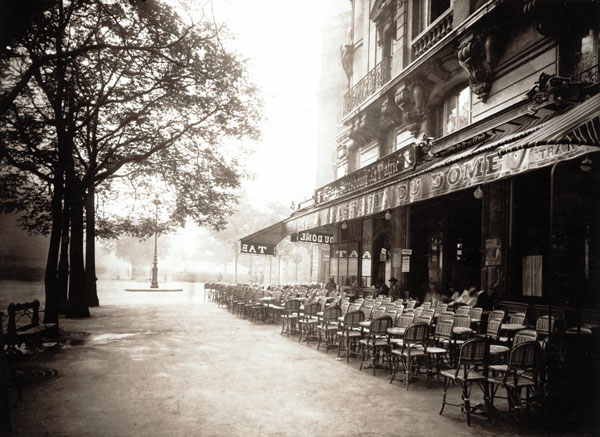 Atget worked hard. Every day was spent on the streets of Paris laden with cumbersome equipment, a bellows camera, glass plates in plate holders, a focusing cloth, a lens case and a wooden tripod. He eschewed the new flexible negatives that had become available which made life easier; he preferred to remain faithful to his old equipment and old habits. He travelled everywhere by bus or Metro carrying all his equipment. 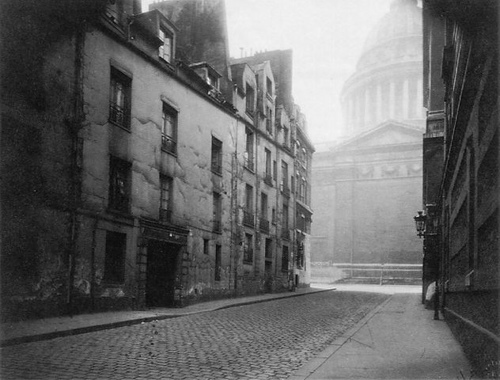 In Atget’s world, photography was not only hard work it was really quite technical too. He used an 18 x 24 cm plate camera with a rectilinear lens. This is a lens, still in use today, that ensures that the vertical lines of buildings always remain vertical. He liked to work in the early morning because he preferred the light at that time and this resulted in lots of photographs with quite eerie empty streets and ghostly people. 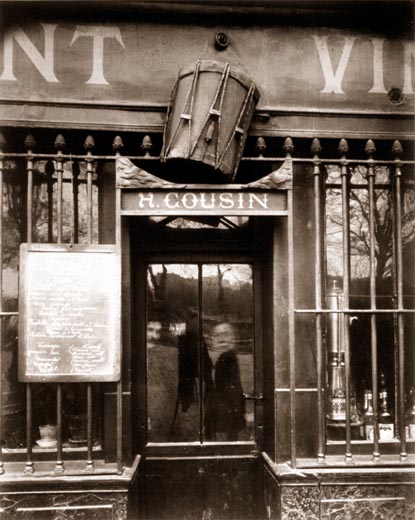 Virtually all the Atget photographs we see today are albumen prints. The paper was sold impregnated with whipped and salted egg white which the photographer soaked in a bath of silver nitrate. Sensitised and dried, the paper was laid in the printing frame with the glass negative and exposed to sunlight until an image appeared, then fixed and toned with a salt of gold.

But it is not for his technical mastery that Atget will be remembered. It is rather for his day in day out unrelenting work recording the face of Paris that was constantly changing. He was not interested in Haussmann’s Paris – rich, grand, pretentious – but in a picturesque section of a wall that was on the point of collapsing, or in any touching or unexpected detail. Although his technique belongs to the nineteenth-century, his vision belongs firmly with us today. 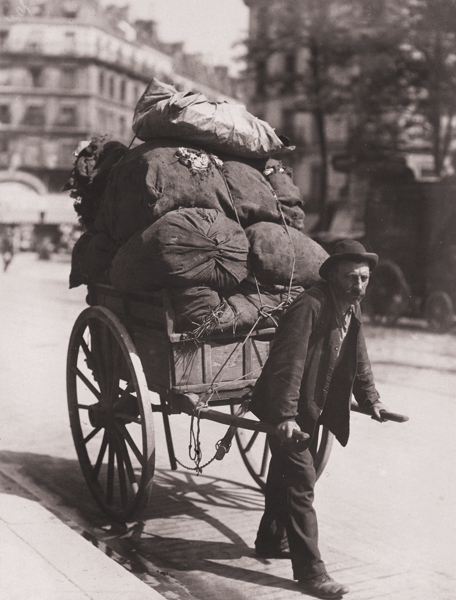 On show at the exhibition are of some of Atget’s most well know photographs along with some pictures that have never been exhibited before.

I recommend this exhibition as a ‘must see’ for anyone with an interest in this wonderful city.

The exhibition EUGÈNE ATGET, PARIS runs from 25th April to 29th July 2012 at:

Open every day from 10 h to 18 h except Mondays and public holidays.