L’Écluse de l’Arsenal and its Sounds

IN THE FOURTEENTH CENTURY it was part of the fossé, the ditch that surrounded the wall built by Charles V to encircle Paris. Today, the Bassin de l’Arsenal (also known as Port de l’Arsenal) is a marina connecting the Canal Saint-Martin to the Seine. 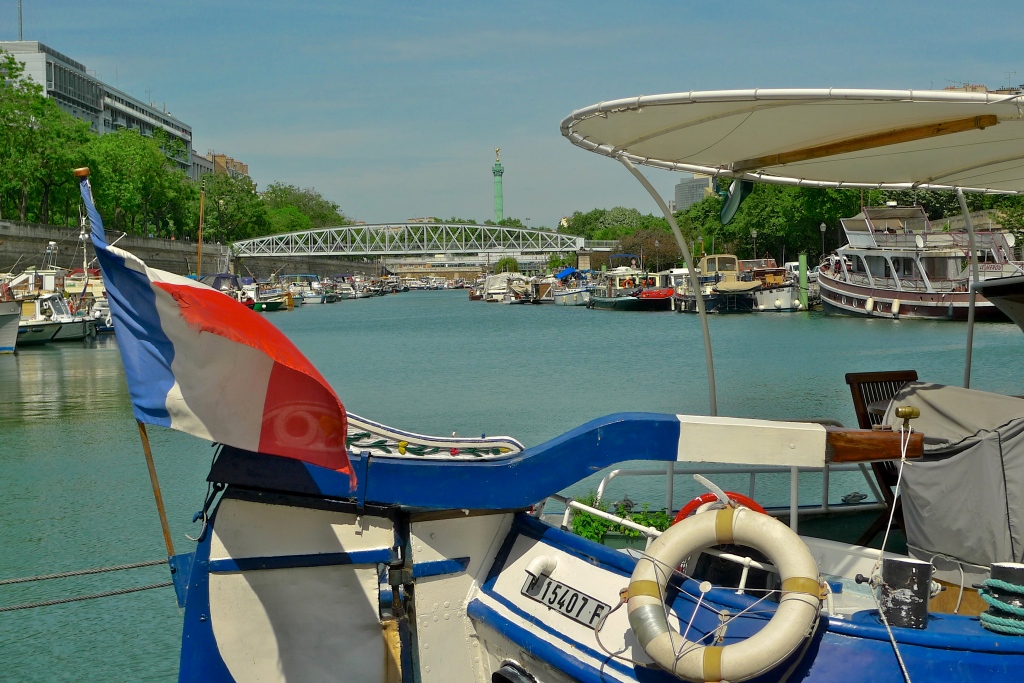 After the destruction of the Bastille fortress in November 1789 during the French Revolution, the Bassin de l’Arsenal was excavated to replace the ditch that had been in place at the fortress.

The Bastille fortress with the fossé (ditch) in the foreground. The fossé was later converted into the Bassin de l’Arsenal.

From the sixteenth to the nineteenth centuries an arsenal existed here, which accounts for the name of the port and the name of the neighbourhood bordering the westerly side of the Bassin.

Separated from the Seine by the ninth and final lock on the Canal Saint-Martin, l’Écluse de l’Arsenal, the port was converted into a port de plaisance (a marina) in 1983. At the same time, a 1.4-hectare public park, the Jardin du Bassin de l’Arsenal, was created along the eastern side of the marina, which includes maple and willow trees and a rose covered pergola. 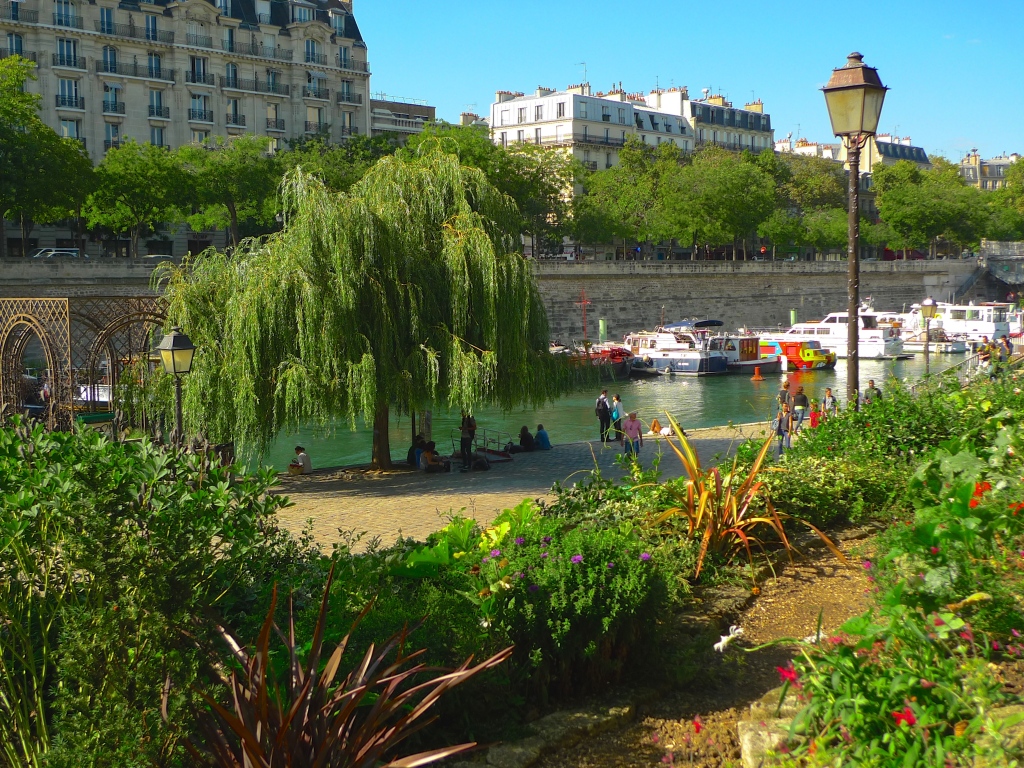 The Bassin de l’Arsenal stretches for six hundred metres between Quai de la Rapée and Place de la Bastille and it forms the boundary of the 4th and the 12th arrondissements.

Running over the lock leading to the Seine at the southern end of the Bassin are two bridges, the road bridge Pont Morland and an iron bridge carrying Métro Line 5. The sounds of the Métro trains running over the iron bridge into and out of Quai de la Rapée station dominate the soundscape around the lock. 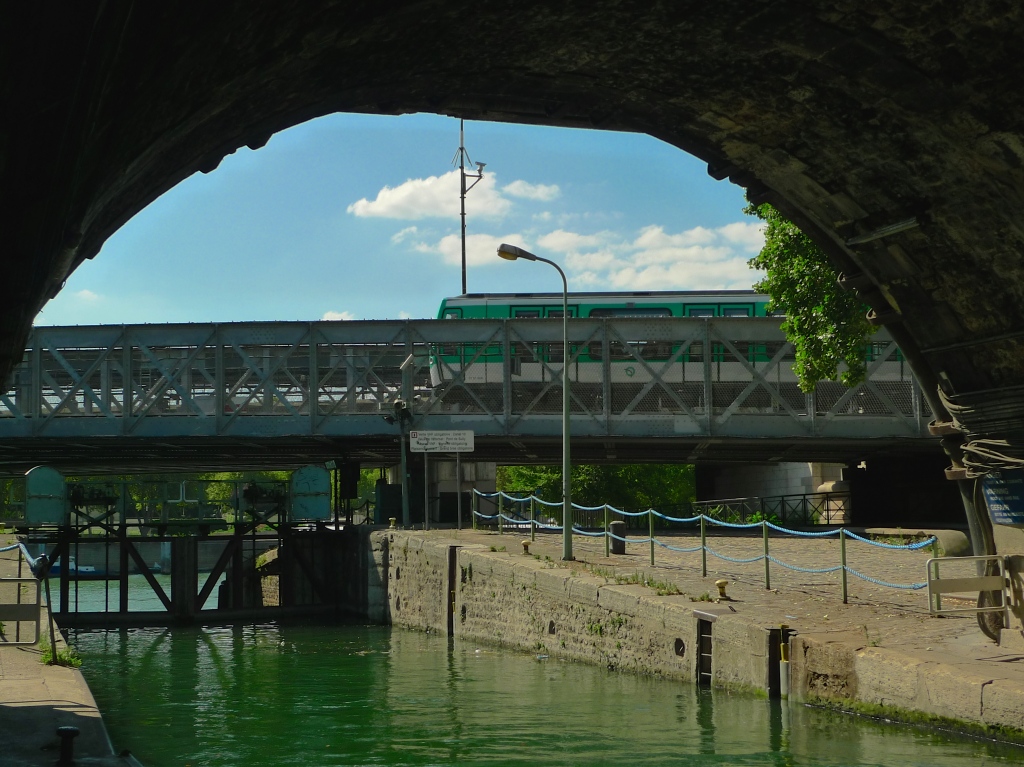 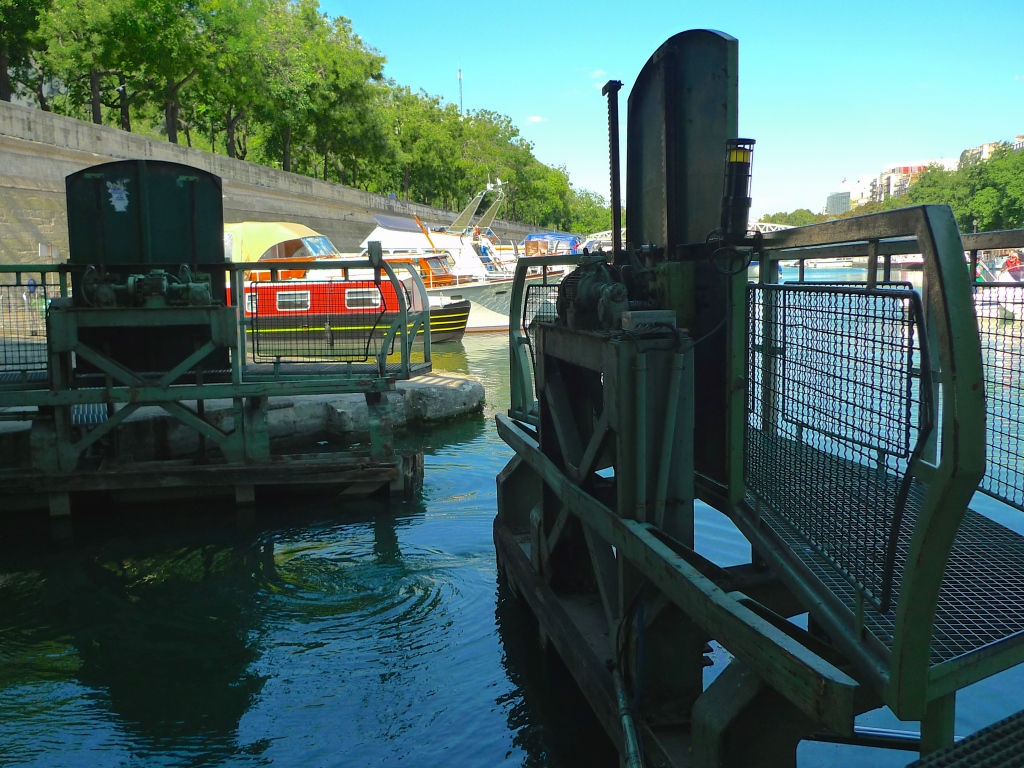 I’m fascinated by industrial soundscapes and so I’ve made many recordings of l’Écluse de l’Arsenal in operation but all of them have been punctuated by the sounds of passing Métro trains. The sounds of the lock operating are really interesting and so for several years I’ve been trying to capture the sounds of the lock without the Métro sounds in the background. The other day I finally succeeded thanks to a temporary interruption to the service on Métro Line 5. 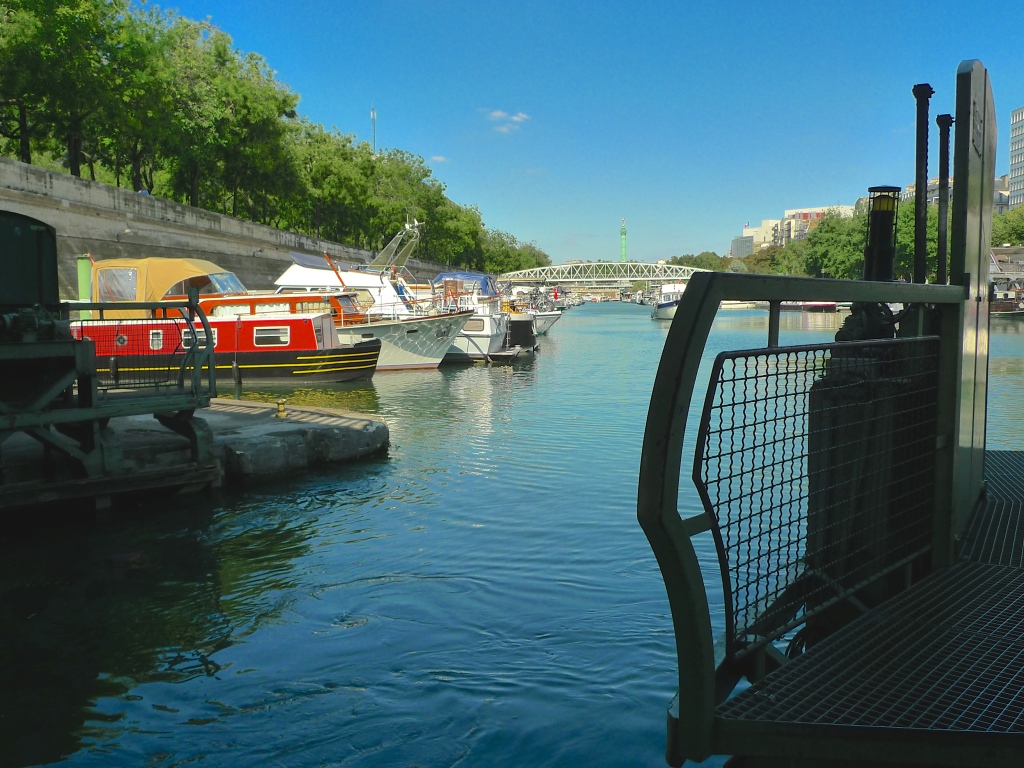 The lock is operated from la Capitainerie, the Harbourmaster’s office on the eastern side of the Bassin. Against a background of hammering from building work on a neighbouring apartment block, two boats are waiting to leave the Bassin de l’Arsenal to enter la Seine.

In this soundscape we hear the lock filling and then a warning signal before the lock gates creak open. The first boat to enter the lock is a bateau école, a training boat. It passes into the lock almost imperceptibly.

The next boat is larger but its sounds are equally tranquil. 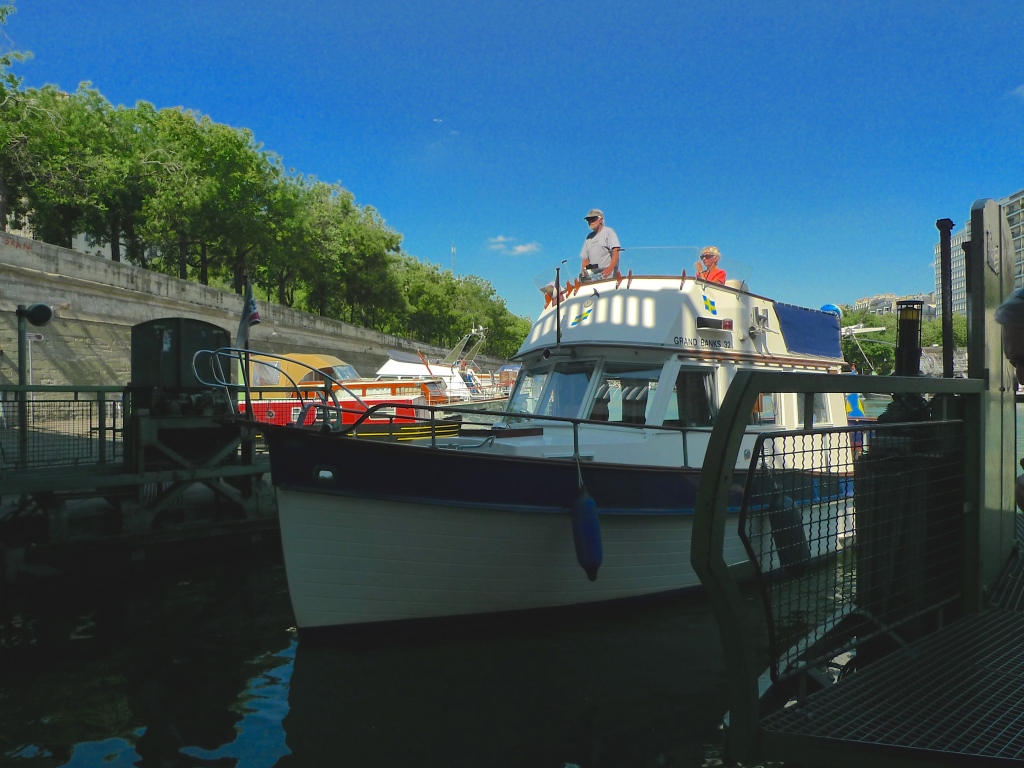 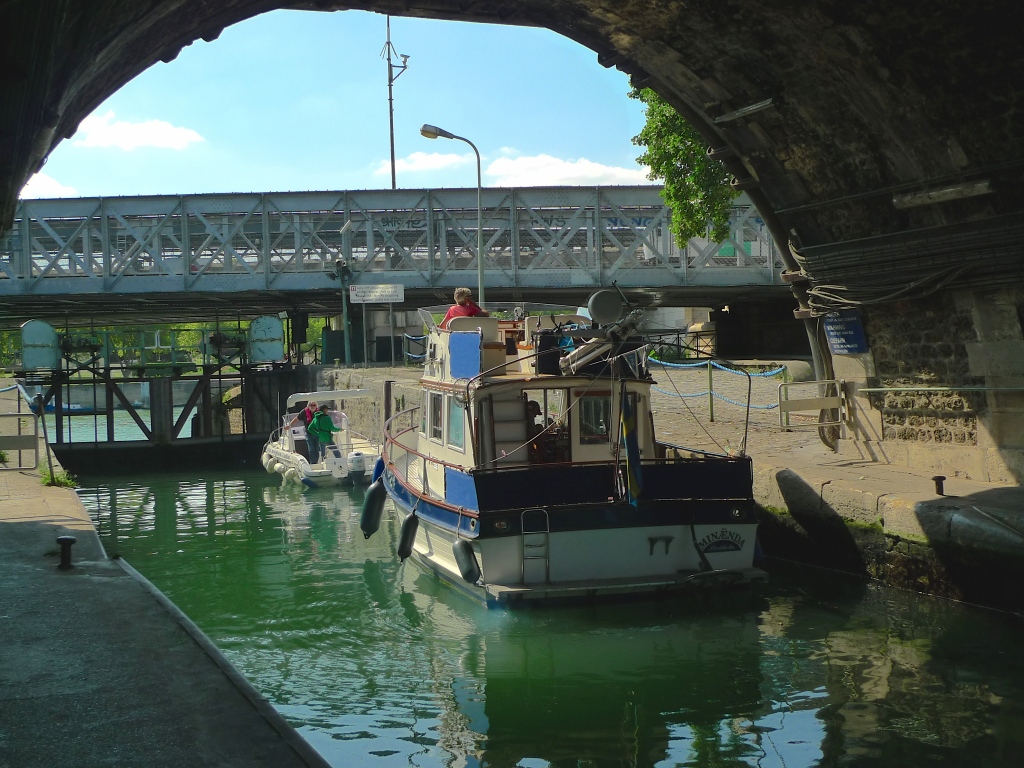 Water drains out of the lock, the boats drop three metres, the lock gates at the far end of the lock are opened and the boats are free to enter la Seine. 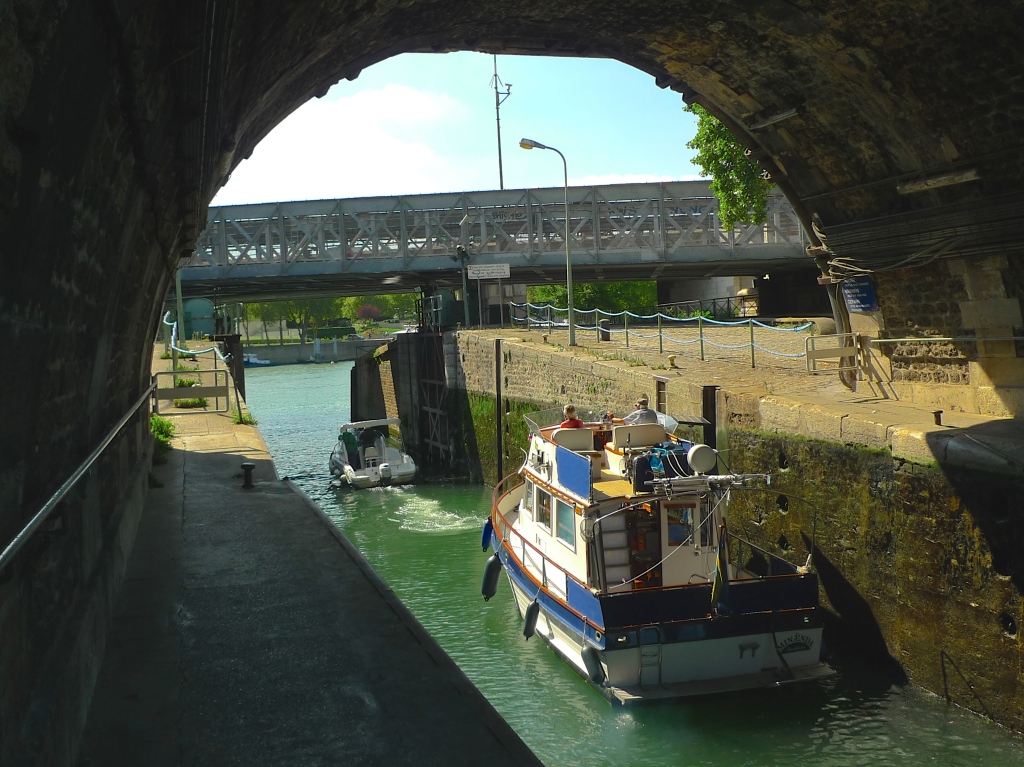 But as the water level is lowered, the soundscape closest to the Bassin de l’Arsenal changes as water seeps into the lock from gaps in the closed but exposed lock gates. 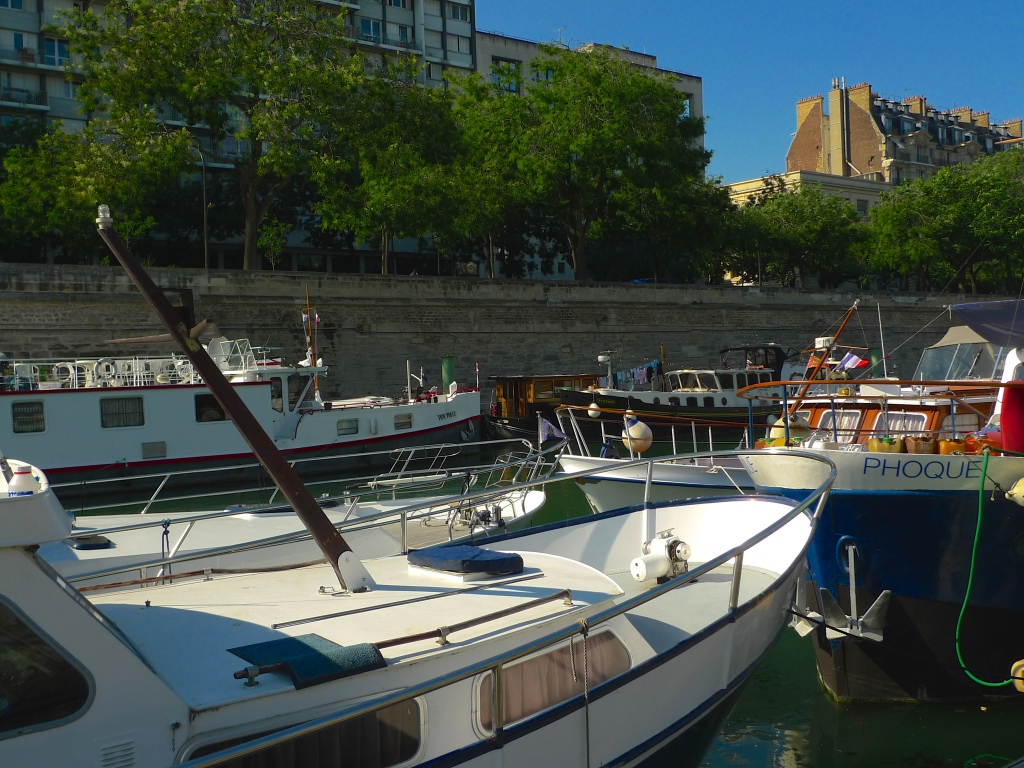 Some of the best sounds in my Paris Soundscapes Archive are sounds of the Paris Métro but even though the sound rich Métro Line 5 was so close this was one occasion when I was pleased that the Métro sounds were absent. 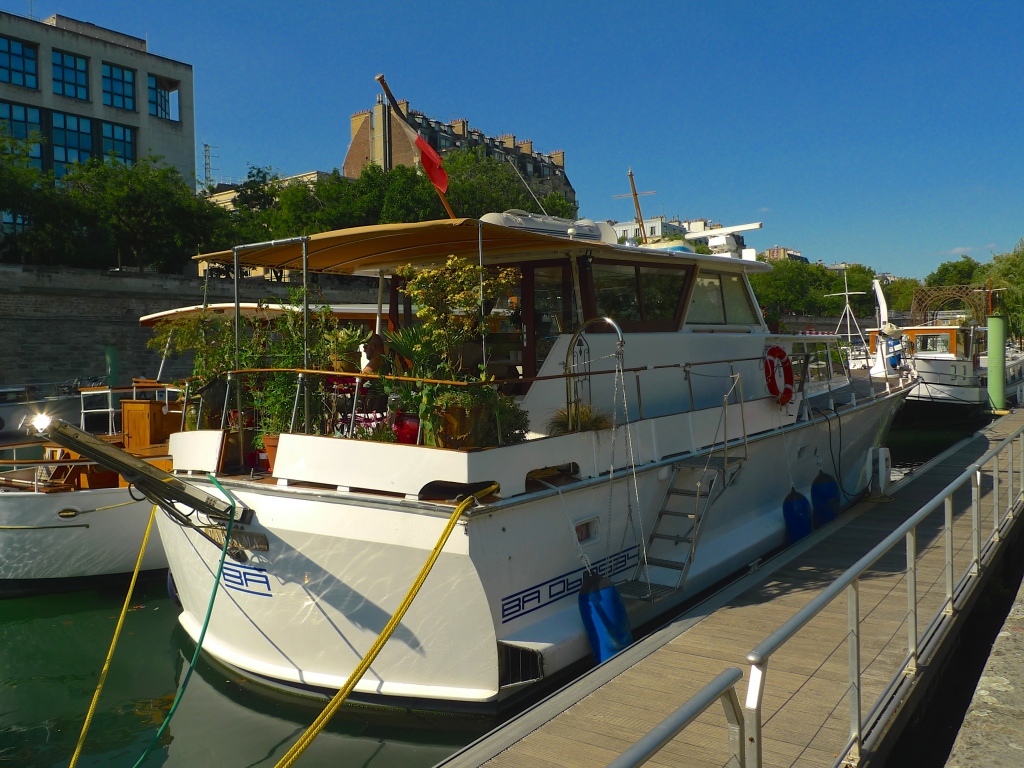