Posts from the ‘Square Monseigneur-Maillet’ Category

Place des Fêtes and its Sounds

ORIGINALLY A FOCUS for celebrations in Belleville before that commune was consumed into the City of Paris in 1863, today’s Place des Fêtes in the 19th arrondissement stands in the midst of the experiment that was 1970s urbanism. 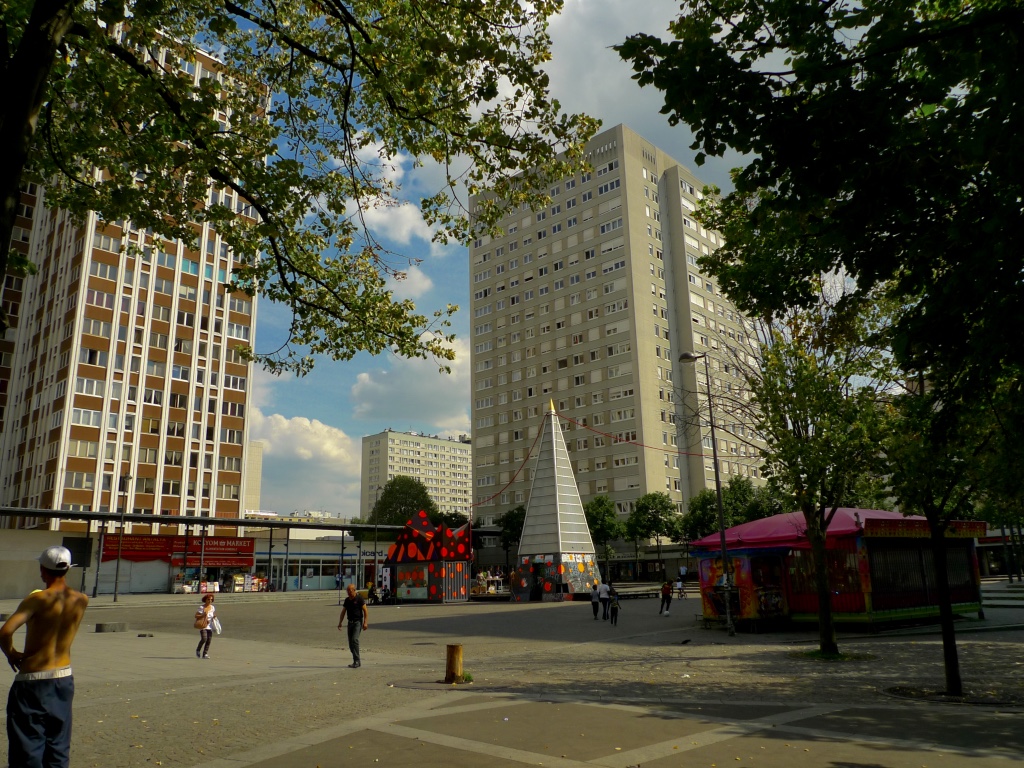 Surrounded by 1970s tower blocks, the Place des Fêtes is a large pedestrianised space, 200 metres long and 150 meters wide, occupied for three mornings a week by a popular outdoor market. At its centre is an obelisk created by the Hungarian artist, Zoltán Zsakó. 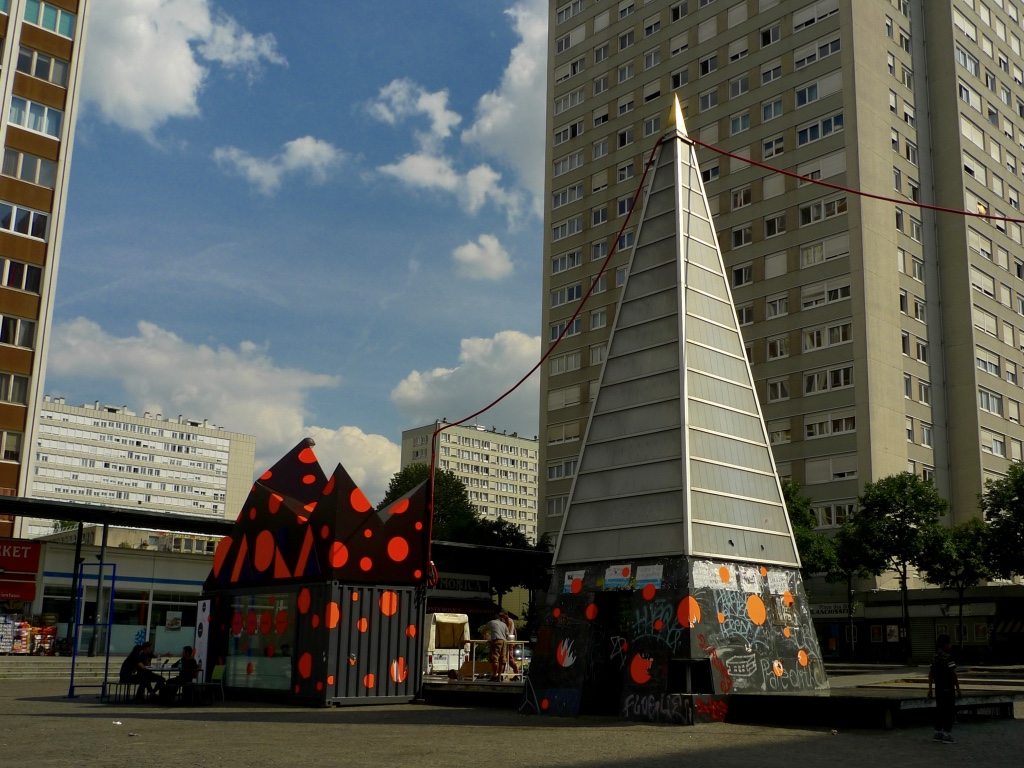 The obelisk stands on a granite base and is made mostly from translucent glass with bass reliefs surrounding the graffiti encrusted lower portion.

Although I have no idea what the artistic intent behind the obelisk is, it does have a practical purpose. It covers the emergency exit from the underground car park beneath the Place des Fêtes.

Another artistic feature of the Place des Fêtes is la fontaine-labyrinthe, the fountain-maze, created by another Hungarian artist, Marta Pan.

La fontaine-labyrinthe is one of the fountains to emerge from the 1978 competition to create seven contemporary fountains in different squares in Paris. Another winner of that competition was La Fontaine Stravinsky in the centre of the city featured in this blog one year ago. 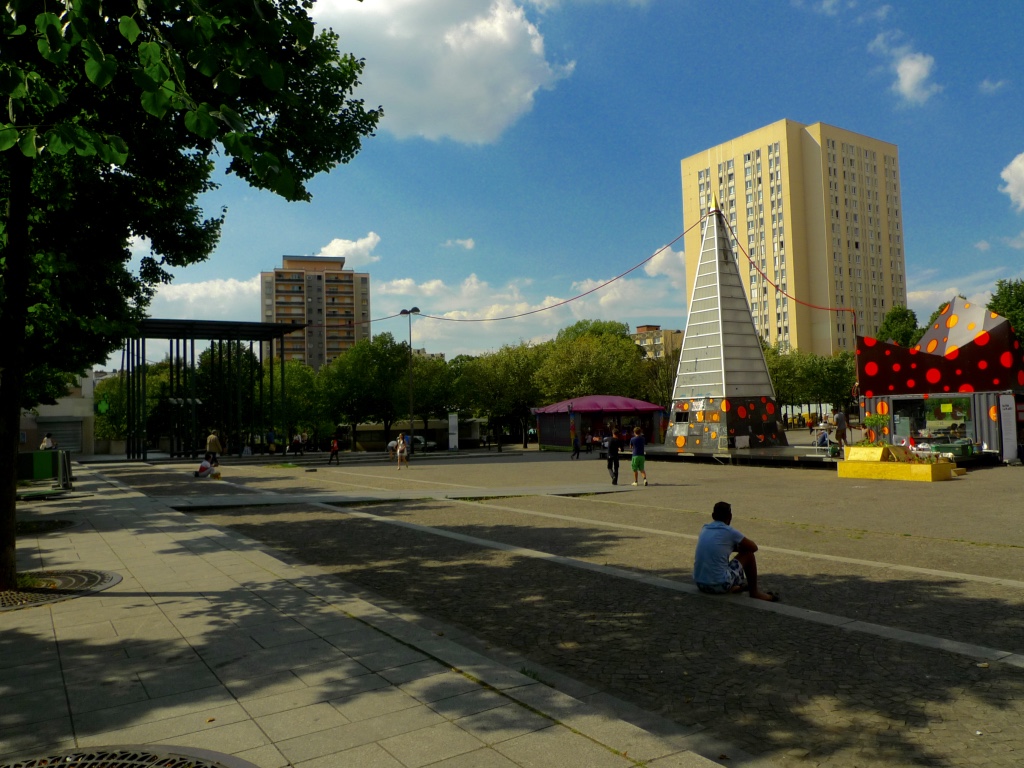 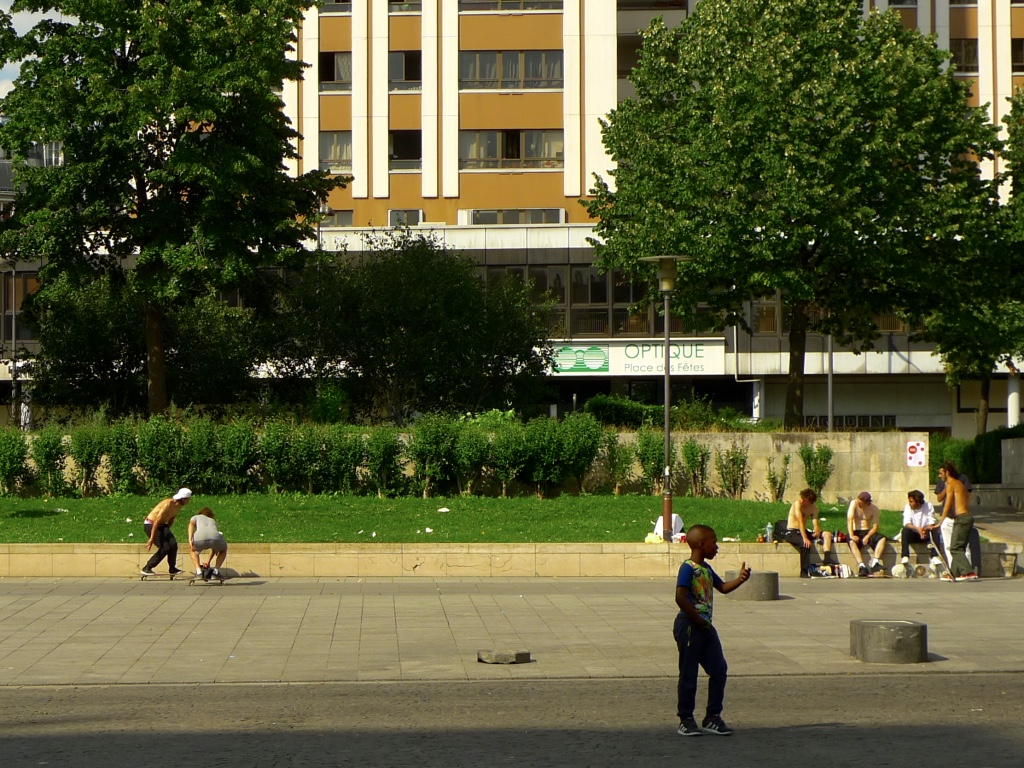 The sounds I recorded in the Place des Fêtes on a hot August afternoon included the sounds of energetic youths skateboarding and young children enjoying the final days of summer before returning to school on 1st September.

Relief from the 1970s concrete jungle can be found on the western edge of the Place des Fêtes in the Square Monseigneur-Maillet, a garden designed by the ingénieur des ponts et chaussées, Jean-Charles Alphand, who worked for Baron Haussmann and his renovation of Paris in the late 19th century.

The garden was opened in 1863 and redeveloped, along with the rest of the Place des Fêtes, in the 1970s.

It seems entirely appropriate that the centrepiece of the Square Monseigneur-Maillet, the kiosque à Musique, or bandstand, reflects the musical association with Monseigneur Maillet. 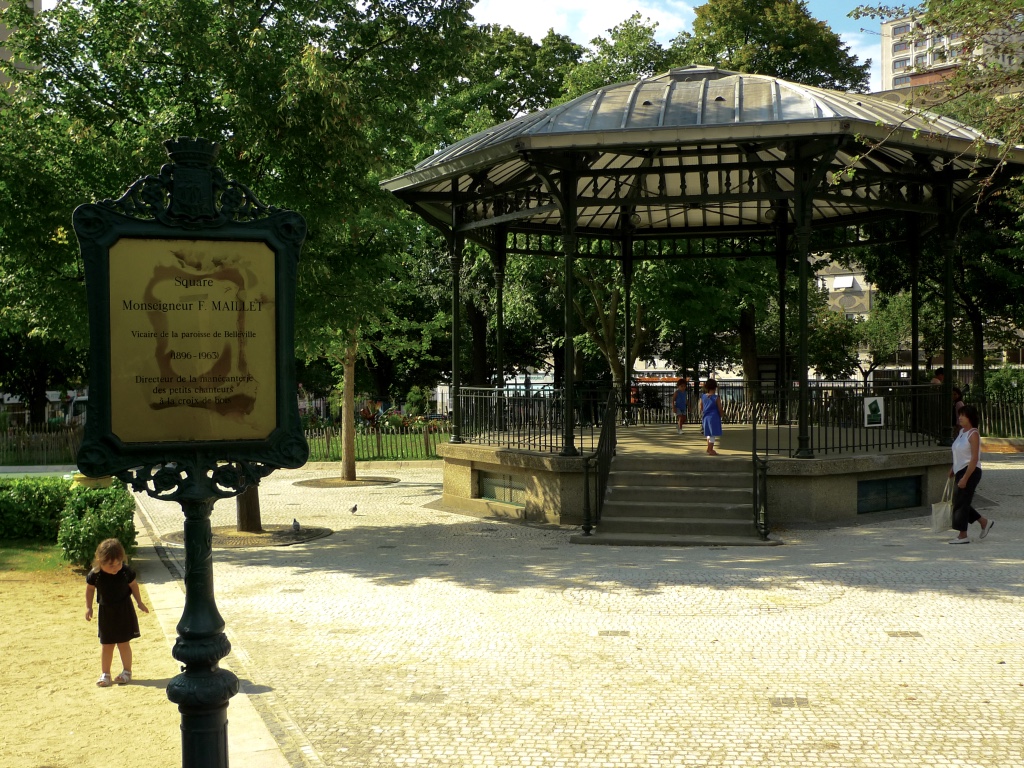 At the eastern end of the Square Monseigneur-Maillet is a reminder of the garden in Alphand’s time, a nineteenth-century Wallace fountain. 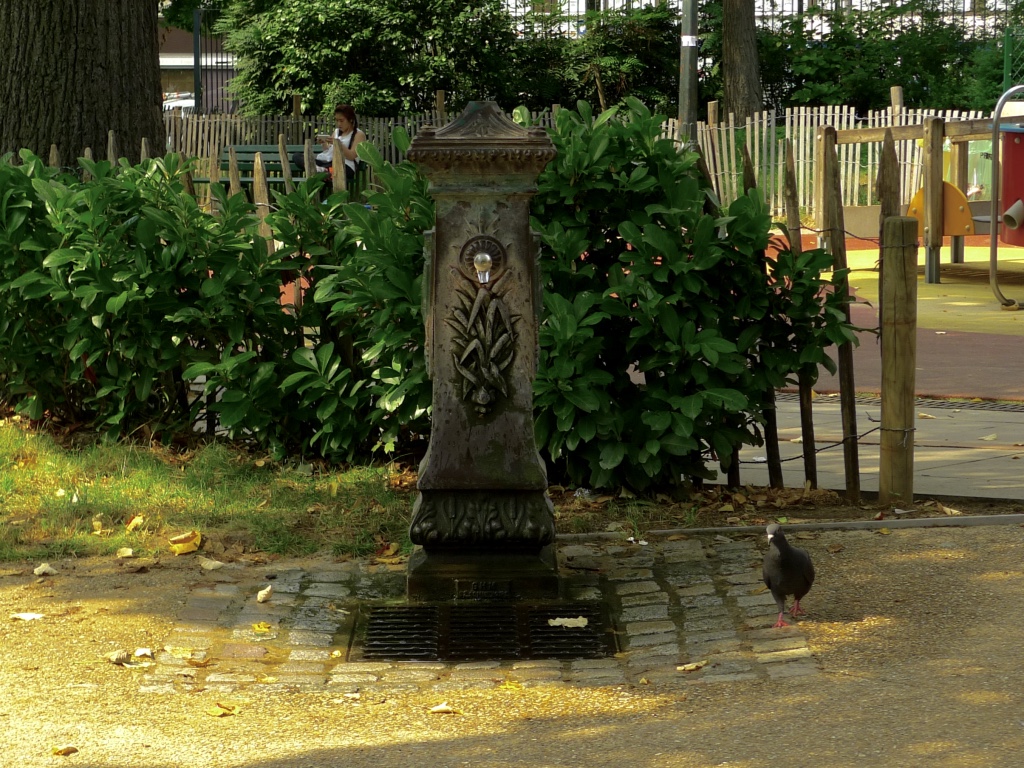 This is not the classic large model fountain resting on an octagonal pedestal on which four caryatids are affixed with their backs turned and their arms supporting a pointed dome decorated by dolphins. This is the small model version, a simple pushbutton fountain that one can find in squares and public gardens across Paris and on a hot, late August day it was a fountain much in demand. 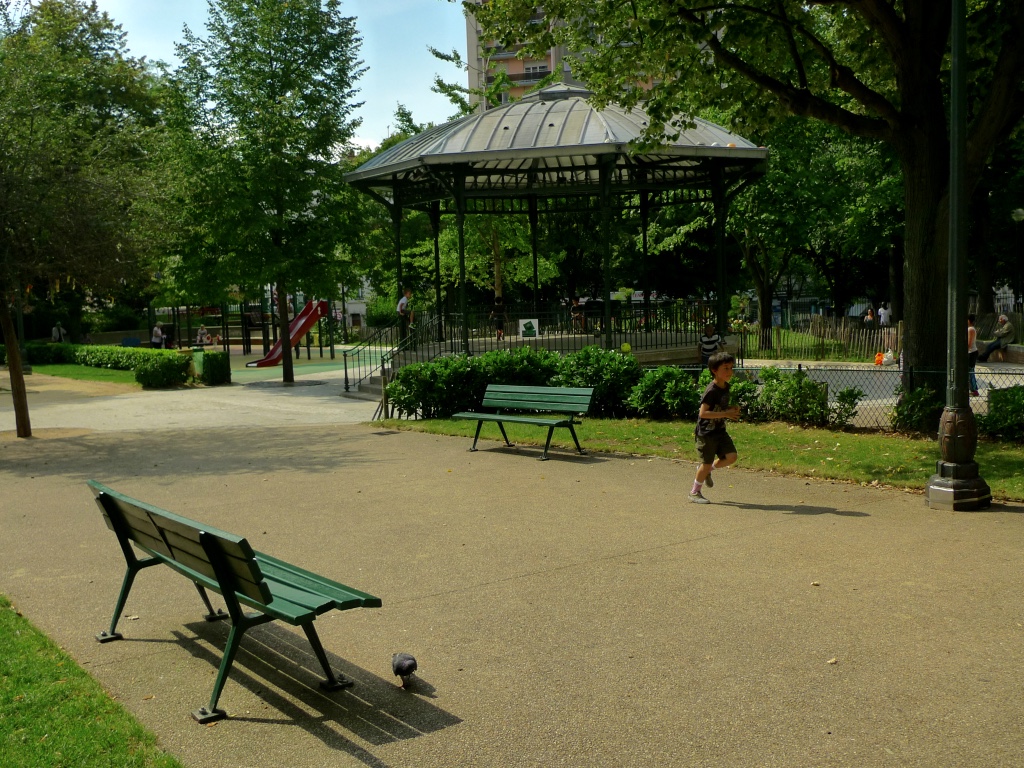