Posts from the ‘Gare Montparnasse’ Category

The Gare Montparnasse and its Sounds

IMAGINE THE SCENE: It’s 22nd October 1895 and the Granville to Paris express, operated by the Compagnie des chemins de fer de l’Ouest, is approaching Paris. Steam locomotive No. 721, hauling three baggage vans, a post van and six passenger carriages with 131 people on board, left Granville on time at 8:45 am but it is now several minutes late for its 15:55 scheduled arrival at the Paris Montparnasse terminus.

Trying to make up lost time the driver, Guillaume-Marie Pellerin, a 19-year veteran of the company, makes the decision to approach Montparnasse station at cruising speed – some 50 kilometres per hour (31 mph).

Realising that the train is entering the station too fast, Pellerin applies the locomotive’s Westinghouse air brake – but it fails to operate. One of the guards, Albert Mariette, is preoccupied with filling out paperwork as they enter the station and fails to notice in time that train is going faster than it should be. Just as he applies the emergency hand brake the train smashes through the buffer stop.

Amid the deafening noise and with steam belching from the engine and sparks flying, people scatter as the engine clatters across almost 30 metres of the station concourse, crashes through a 60-centimetre thick wall, shoots across a terrace and smashes out of the station, plummeting onto the Place de Rennes 10 metres below where it ends up on its nose.

Photograph by Studio Lévy and Sons

Remarkably, there is only one fatality. Marie-Augustine Aguilard, has been standing in for her husband, a newspaper vendor, while he goes to collect the evening papers. She is hit and killed by falling masonry.

Two passengers, the fireman, two guards and a passerby in the street sustain injuries. 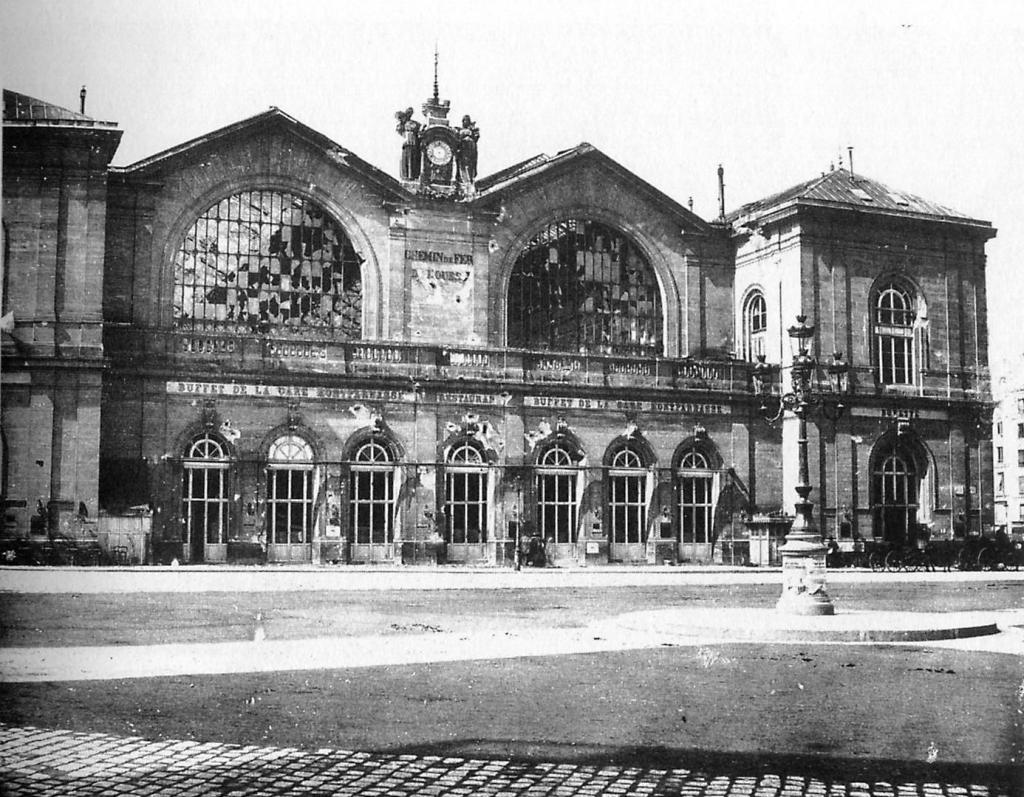 The station the Granville to Paris express slammed through was built by architect Victor Lenoir and the engineer Eugène Flachat in 1852, replacing the original 1840 Gare de l’Ouest station, which was unable to cope with the mid 19th century growth in traffic.

In 1909 the state bought the Compagnie des chemins de fer de l’Ouest including the Gare Montparnasse, which it used for new lines to Tours, Nantes, Bordeaux and La Rochelle.

In the 1930s a separate extension was added to the station, the Gare du Maine, designed by the French architect and designer Henri Pacon in Art Deco style. Eventually, this extension became the terminus for the main lines and the old station was reserved for commuter traffic.

Site of the original Gare du Maine extension which was demolished in the 1960s.

Both the 1852 Gare Montparnasse and the Place de Rennes into which the express nose-dived are no more.

In 1951, Place de Rennes was renamed Place du 18 juin 1940 in commemoration of the radio broadcast Charles de Gaulle made from London on 18th June 1940 (L’Appel du 18 juin), in which he urged the French people to resist the Nazi occupiers (who had invaded the previous month), thereby launching the French Resistance Movement.

During the 1960s, a new Gare Montparnasse, integrated into a complex of office buildings, was built and in 1969, the old station was torn down and the Tour Montparnasse was built in its place.

Over 50 million passengers a year pass through today’s Gare Montparnasse, one of the six mainline railway stations in Paris. They use intercity TGV trains to the west and south-west of France including Tours, Bordeaux, Toulouse, Rennes and Nantes, and suburban and regional services on the Transilien Paris – Montparnasse routes. They also use the busy Métro station, an intersection for Métro lines 4, 6, 12 and 13.

I was surprised to find that amid the hustle and bustle of the main concourse and the platforms there were places that were relatively calm and quiet. Closer to the platforms of course it was the trains that made their voices heard.

Sounds stimulate the imagination so, if like me, you have a fascination for sound and a sense of history, you might be forgiven for imagining that the sound of the gasps of compressed air escaping from the parked trains are not too far removed from the sound of steam escaping from the Granville to Paris express hurtling towards its resting place in the Place de Rennes.

The Gare Montparnasse in sound:

The fate of the Granville to Paris express was well documented in pictures. As well as the iconic photographs by Studio Lévey and Sons and Henri Roger-Viollet (above), a third equally well-known photograph of the scene by L. Mercier is displayed in the Musée d’Orsay.

But nowhere was the event or its aftermath captured in sound – a good example of just how recent our ability to capture topical sounds is and a perfect example of how much of our sonic history has passed by completely unrecorded.

I’m pleased to say that while I was in the Gare Montparnasse all the trains stayed very firmly on their tracks with none of them attempting to cross the concourse and venture outside!

Gare Montparnasse Platform 9: The 15:28 departure for Bordeaux and Toulouse