A Soundwalk and the Unexpected

LAST YEAR, I WALKED the full length of the Canal Saint-Denis from its junction with the Canal de l’Ourcq in the Parc de la Villette to the final lock, l’Écluse de la Briche, where the canal discharges into la Seine.

The last leg of that walk took me to the western edge of the municipality of Saint-Denis and since then I’ve been back to Saint-Denis many times to capture more of its sound tapestry.

Saint-Denis is one of the poorest municipalities around Paris and it often gets a bad press, not least because of its high crime rate – not to mention the dramatic headlines it made a couple of weeks ago in the aftermath of the 13th November attacks in Paris. 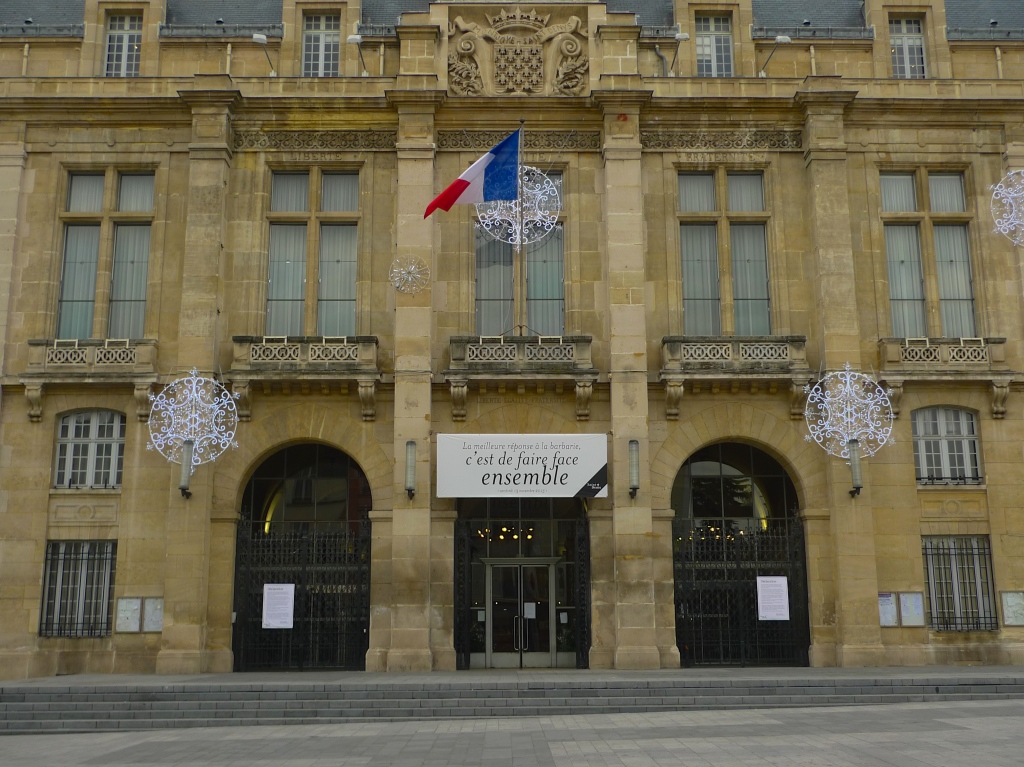 The other day I went to Saint-Denis to record more sounds for my Paris Soundscapes Archive and among the sounds I captured were those from a soundwalk I did in Rue de la République, one of the main shopping streets.

Every Tuesday, Friday and Sunday, Saint-Denis hosts a huge market made up of an outdoor street market in the Place Jean Jaurès, which spills over into the surrounding streets, and a fabulous indoor food market in the neighbouring Grande Halle. I’ve recorded the sounds of these markets several times and I will feature some of them in a future blog piece.

Soundwalking is a fascinating way of exploring and exploring ordinary streets can often reveal the unexpected.

I discovered that Rue de la République has an interesting ecclesiastical symmetry. At its eastern end is a masterpiece of Gothic art, the Basilique Cathédrale de Saint-Denis, the Royal Necropolis of France, containing the tombs of 42 kings, 32 queens, 63 princes and princesses and 10 great men of the realm.

The first fifty metres or so of the street is open to traffic but after that Rue de la République is reserved for pedestrians.

About halfway along Rue de la République I came upon the post office whose elegant exterior belies its rather scruffy interior.

What I discovered next was quite unexpected.

Directly opposite the post office is Rue du Corbillon, a seemingly ordinary side street leading off Rue de la République. But sometimes the ordinary is not what it seems.

At about 4.20 on the morning of 18th November, five days after the Paris attacks, the police sealed off the entire Rue de la République, evacuated local residents, and focussed their attention on N° 8 Rue du Corbillon.

What followed was an intense gun battle with around a hundred heavily armed elite special forces, supported by the army, firing more than 5,000 rounds of ammunition amidst heavy explosions. The operation ended at 11.37 am by which time three people had died: Abdelhamid Abaaoud, 27, the alleged ringleader of the Paris attacks, his 26-year-old cousin, Hasna Aït Boulahcen, and an unidentified third person. Eight people were arrested.

Listening to the everyday sounds at the junction of Rue de la République and Rue du Corbillon, I couldn’t help imagining the sounds that would have been heard here on the morning of 18th November – echoes of sounds heard across the city five days before.

Unlike at the sites attacked in Paris, there are no floral tributes or messages of sympathy outside the boarded up N° 8 Rue du Corbillon.

For me, the image of this building will soon be forgotten – quite unlike the images of the shuttered cafés and restaurants attacked on 13th November, which will live with me for a very long time.

Yesterday, the Café Bonne Biere in Rue du Faubourg du Temple, where five people died in the Paris attacks, reopened – the first of the attack sites to do so.

You can read about my walk along the Canal Saint-Denis by clicking the links below:

The Canal Saint-Denis and its Sounds – Part 1

The Canal Saint-Denis and its Sounds – Part 2

The Canal Saint-Denis and its Sounds – Part 3

The Canal Saint-Denis and its Sounds – A Postscript