The Marché Poncelet and its Sounds

ONE WEEK AGO, on the afternoon of Christmas Eve, I emerged from the overcrowded retail emporium, La Fnac, into the Avenue des Ternes in the 17th arrondissement. Outside the store I found a brass trio from the Armée du Salut (the Salvation Army) braving the cold to give their rendition of some popular Christmas carols.

I stopped to listen to them and then, after leaving a contribution in their collecting tin, I walked round the corner into one of my favourite Parisian street markets, the Marché Poncelet.

Within a stone’s throw of the Arc de Triomphe, the Marché Poncelet occupies part of the Rue Poncelet and the Rue de Bayen. Around its edges you can find stalls selling flowers, chocolates, clothes, household goods, jewellery, trinkets and souvenirs but at its heart is the fresh food, the fruit, vegetables, seafood, artisan cheese and freshly baked bread that really makes this market so popular and gives it the reputation of being one of the best food markets in Paris.

The sounds of the Marché Poncelet:

As well as the colourful cornucopia of fresh food and other goods on display, the Marché Poncelet also boasts a fascinating soundscape. Like in most markets, the stallholders here are not shy about advertising their wares by shouting to attract the attention of customers but this market is in the centre of Paris and so, unlike many of the markets at the periphery of the city, the language here is exclusively French. Compare for example, the sounds of this market with the sounds of the Marché Barbès I recorded a few weeks ago where French is barely spoken at all.

Exploring how the soundscape of the city changes from the centre to the periphery is one of the things I find endlessly fascinating about exploring the sounds of Paris.

Perhaps it’s just my natural curiosity, but I always find myself looking for ‘connections’ when I visit places in Paris. Of course, connections between sound and place are at the heart of the work I do here but sometimes I stumble across other, often more abstruse, connections. Take for example the connection between the Marché Poncelet and projective geometry … 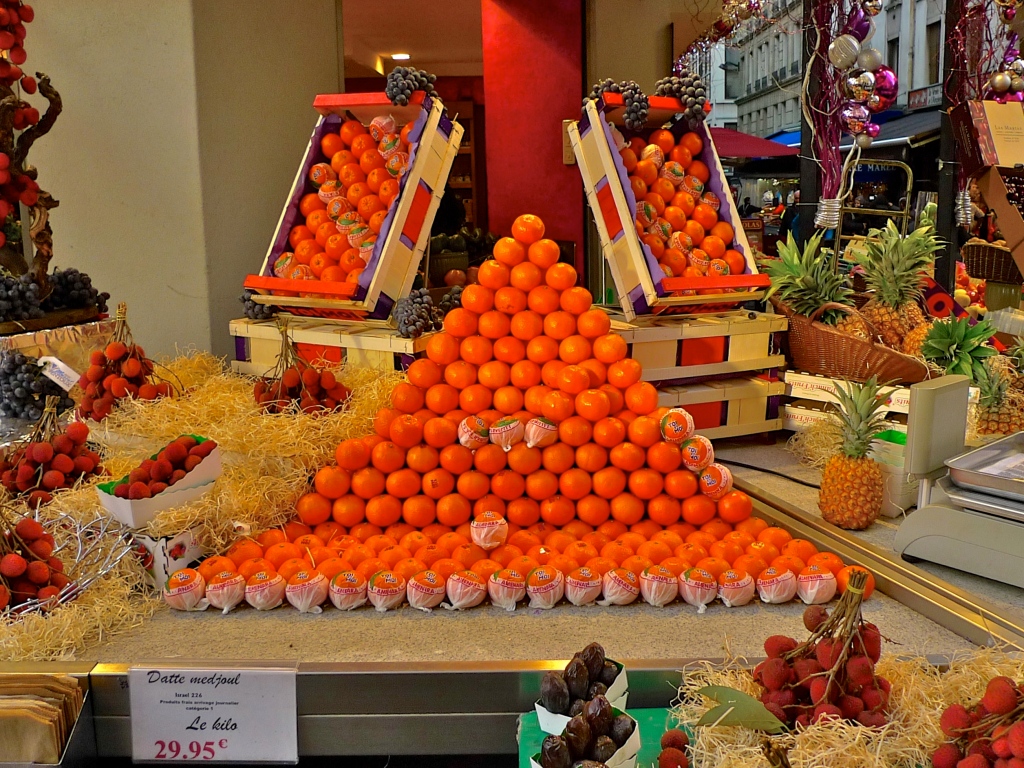 The Marché Poncelet takes its name from rue Poncelet, which was named after the French engineer and mathematician, Jean-Victor Poncelet (1788-1867).

Poncelet’s most notable mathematical work was in projective geometry, in particular, his work on Feuerbach’s theorem. He also made discoveries about projective harmonic conjugates among which were the poles and polar lines associated with conic sections. These discoveries led to the principle of duality and also aided in the development of complex numbers and projective geometry.

Of course, Poncelet’s mathematics is all gobbledegook to me but maybe the vendor in the picture above is on to something with his clémentines arranged geometrically.

The Marché Poncelet should certainly be on your ‘to-do’ list if you’re in Paris and once there, I recommend that you stop off at Daguerre Marée, which just has to be one of the very best seafood shops in town!

Here are some more sights of the Marché Poncelet: 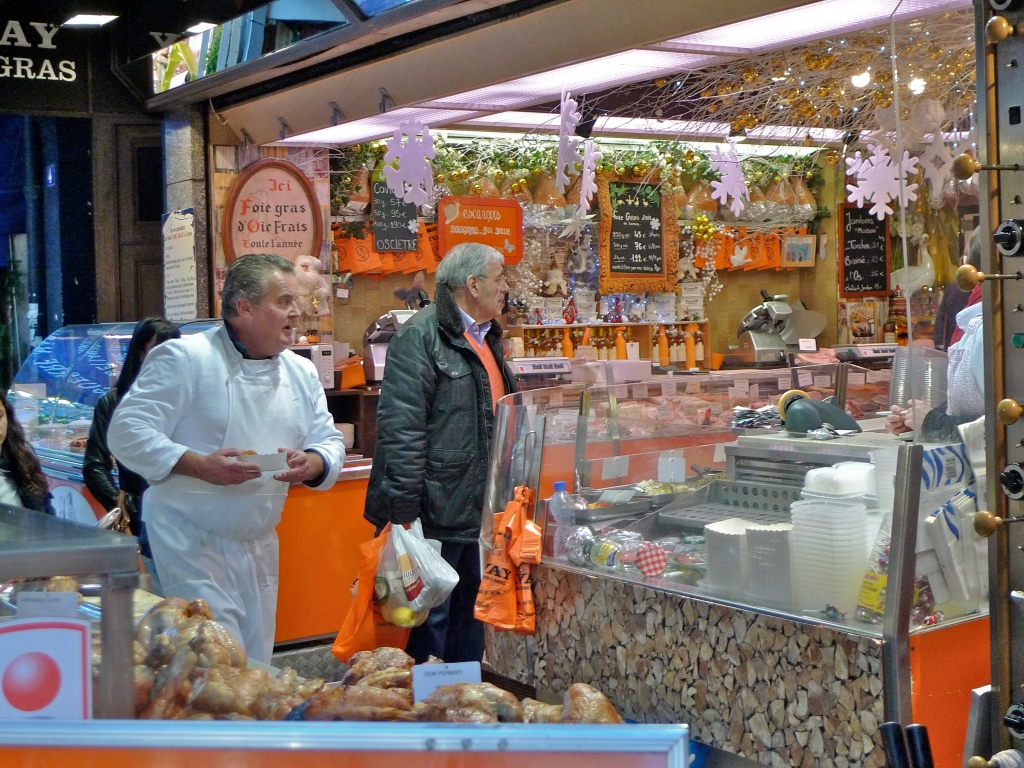 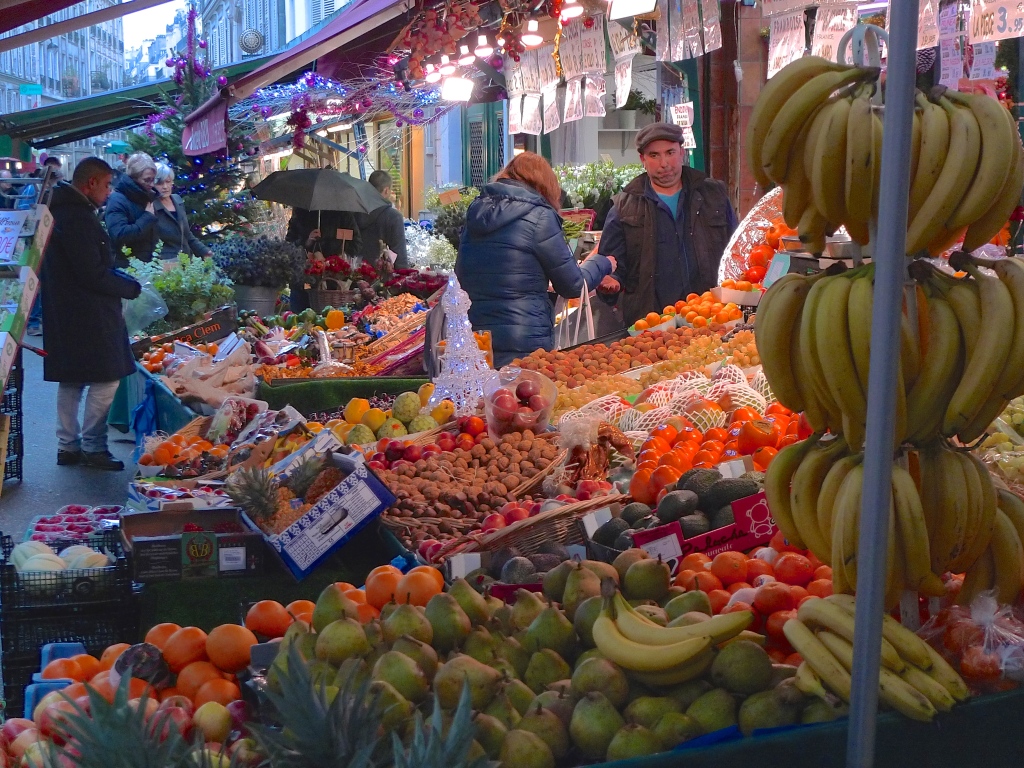 FOLLOWING ON THE HEELS of Aristide Boucicault’s hugely successful Au Bon Marché, which opened in 1852, Jules Jaluzot and Jean-Alfred Duclos, opened their department store, Printemps, at the corner of Rue du Havre and Boulevard Haussmann in 1865. The store was designed by Jules and Paul Sédille.

The building was expanded in 1874, and elevators (then a great novelty) from the 1867 Universal Exposition were installed. Rebuilt after a fire in 1881, the store became the first to use electric lighting and it was one of the first department stores with direct access to the Métro to which it was connected in 1904. 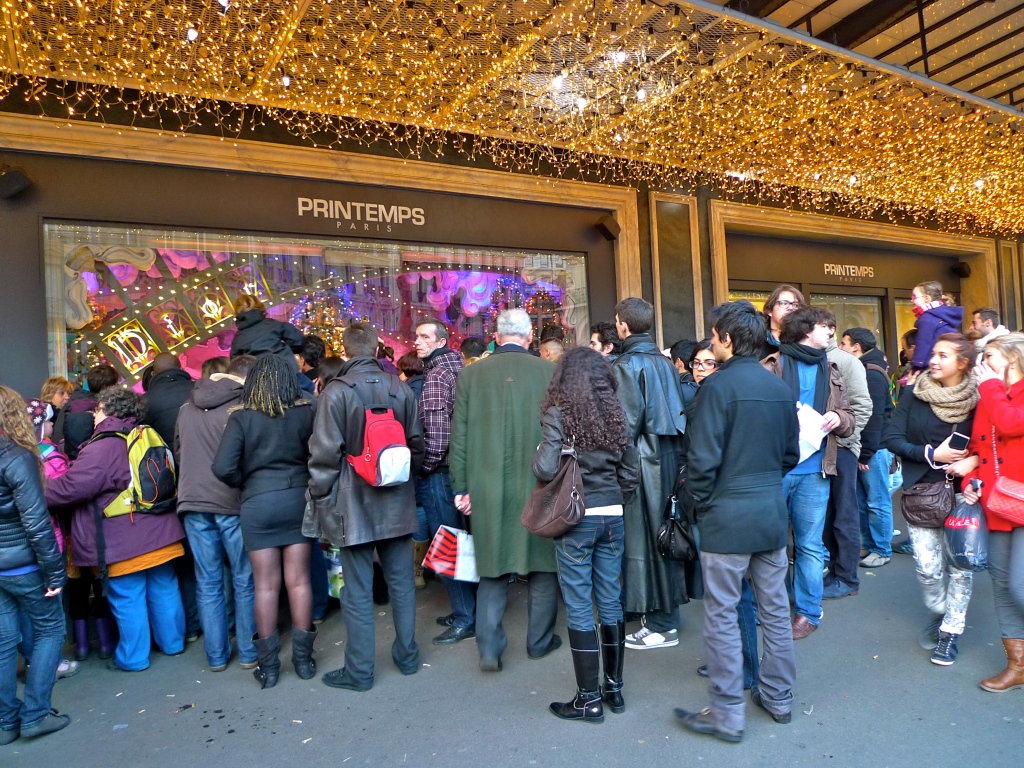 Like all the big departments stores in Paris, Printemps decorates its windows at Christmas and large crowds gather to try to get a glimpse of the displays. This year, the fashion house, Dior, has taken over the Printemps windows. 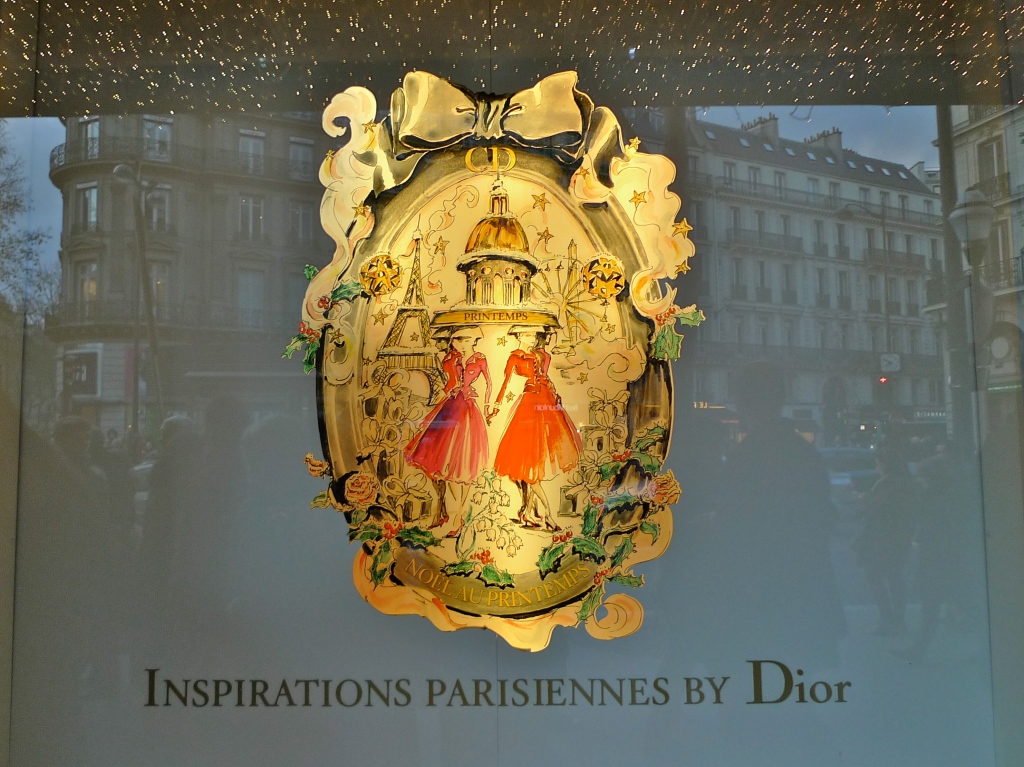 Seventy-four hand-made poupettes dressed in Dior haute couture crafted in the Dior atelier in the Avenue Montaigne are to be seen  – if you can get close enough!

The cacophony of sound outside the Printemps windows:

By 1900, Printemps was in trouble. Gustave Laguionie replaced Jules Jaluzot as owner  after the business came close to collapse. In the early 20th century, the building was extended along the Boulevard Haussmann by architect René Binet in an art nouveau style. 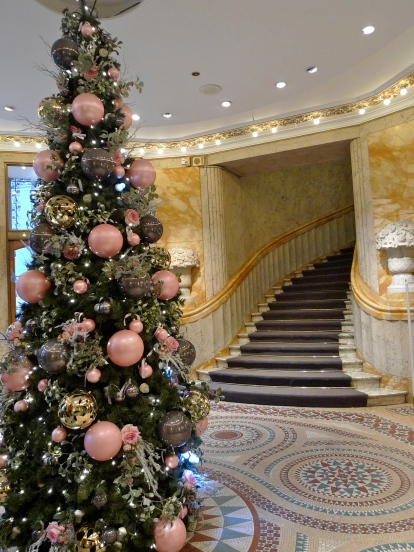 In 2010, the Canadian architectural firm, Yabu Pushelberg, completed a redesign of the interior of Printemps.  The award-winning designers, George Yabu and Glenn Pushelberg say that, “The Printemps’ retail space is conceived as a series of ‘rooms’, like a large mansion, each with its own unique and identifiable character, to create an exclusive residential ambience in order to avoid commercial stereotypes and promote a relaxing atmosphere.” 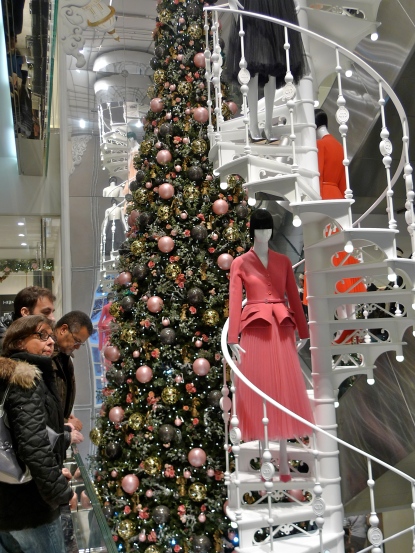 Yabu and Pushelberg have done a good job. Their design is trés chic as befits a flagship store – but sound design is clearly not their strong point! I can’t help wondering why they went to so much trouble to perfect the interior design and then infested the entire ambience with mind numbing ‘musac’, not quite loud enough to be annoying but certainly loud enough to be irritating. It seems to add nothing except to raise the ambient sound level for no obvious reason.

Across the street from Printemps I found the Armée du Salut, the Salvation Army, in festive mood.

Not perhaps the best Salvation Army band I’ve heard, but full marks for effort and enthusiasm on a cold winter’s day. 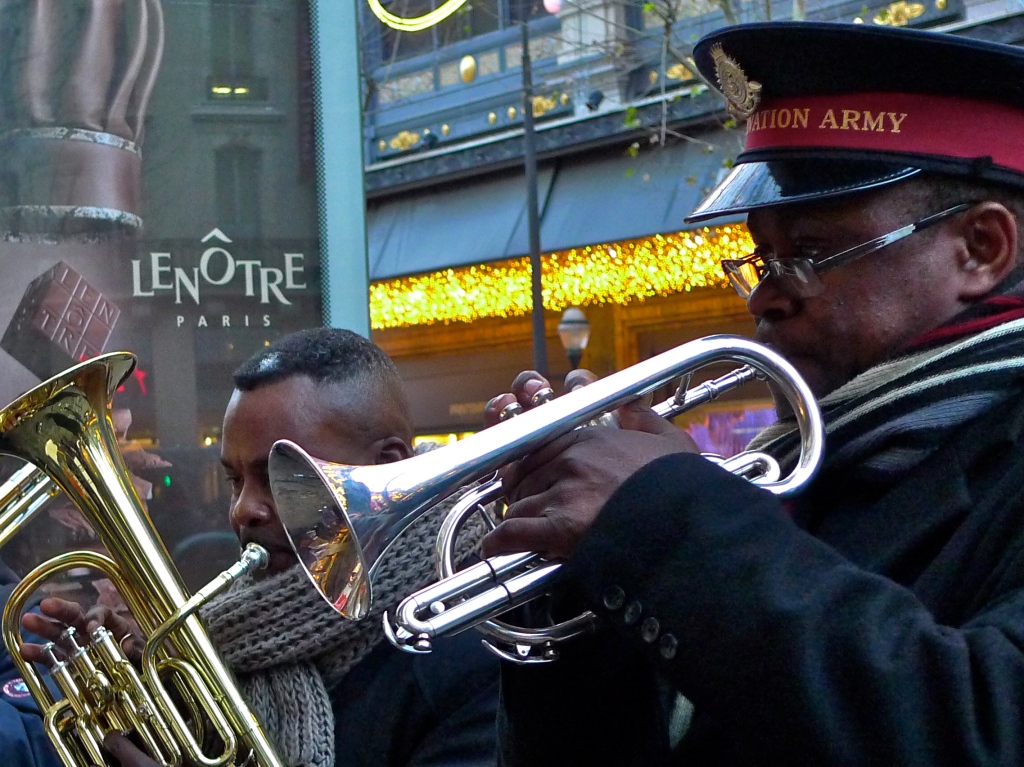 Looking back at Printemps from across the street I was reminded that on 16th December 2008, the store was evacuated following a bomb threat from the FRA (Afghan Revolutionary Front). The bomb disposal services found five sticks of dynamite in a toilet in the store. The FRA claimed responsibility and demanded the withdrawal of 3,000 French soldiers deployed in Afghanistan.

I remember this incident very well and perhaps it’s a reminder that there are more important things in the world than glitz, glamour and bad sound design!