The Canal Saint-Denis and its Sounds – Part 2

IN THE FIRST PART of my exploration of the Canal Saint-Denis I followed the canal from its starting point at the Canal de l’Ourcq in the Parc de la Villette to the end of the Quai de la Gironde in the 19th arrondissement.

In this second part, I’m going to leave the Paris city limits and follow the canal as far as the swing bridge, the Pont Tournant du Canal Saint-Denis, at Aubervilliers in la Plaine Saint-Denis .

The green arrow shows my route from the end of the Quai de la Gironde to the Pont Tournant du Canal Saint-Denis. The horizontal line shows the Paris city limits.

Tram stop, Canal Saint-Denis, on Tram Line 3b at the end of the Quai de la Gironde

To continue walking along the canal it’s necessary to cross the bridge at the end of the Quai de la Gironde, the Pont MacDonald, and walk down to the canal on the opposite side. But before I did that I wanted to take a short detour.

Before crossing the bridge, I crossed the road by the tram stop and walked along the canal as far as the Boulevard Périphérique, which is as far as you can go on this side of the canal. There I found the newly opened first forest planted within the city of Paris.

Occupying a strip of land between office buildings on one side and the Boulevard Périphérique on the other it’s perhaps a little early to call it a forest but these young saplings are expected to grow into something much more substantial over the next fifteen years or so.

This new urban forest is intended in part to shield the neighbourhood from the noise pollution generated by the constant ribbon of traffic passing by on the Périphérique. 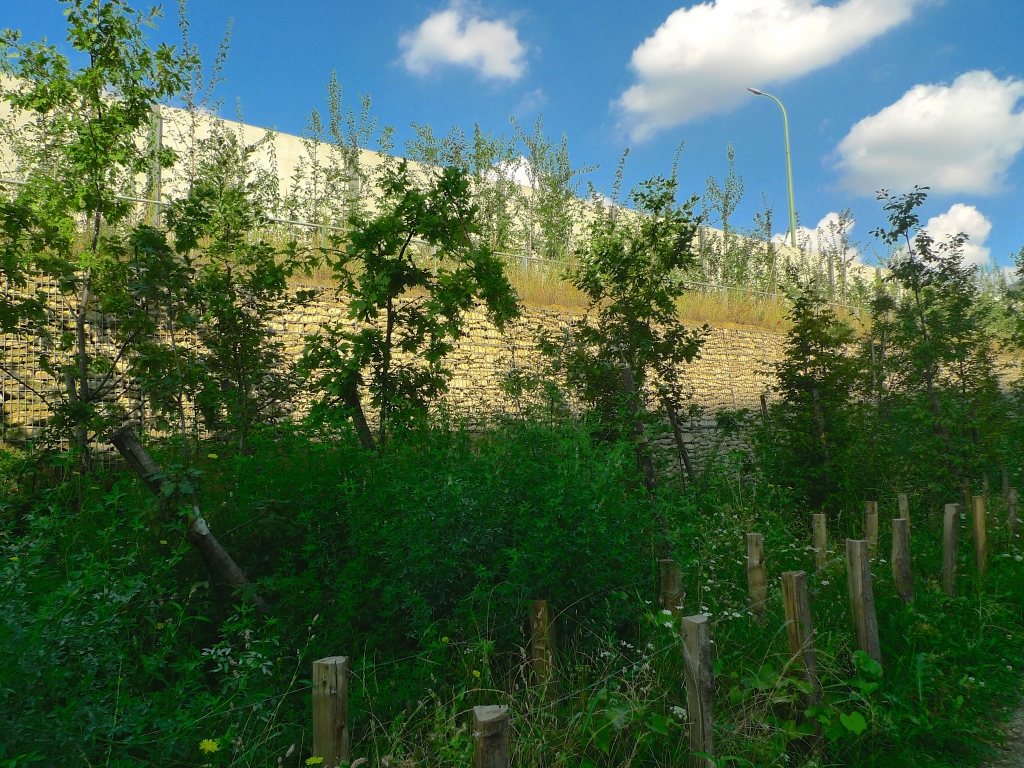 The Boulevard Périphérique lies directly above and behind these saplings beyond the wall and the lamppost.

It seems that the Paris city authorities are not expecting the root cause of the noise pollution problem, excessive traffic, to reduce any time soon. 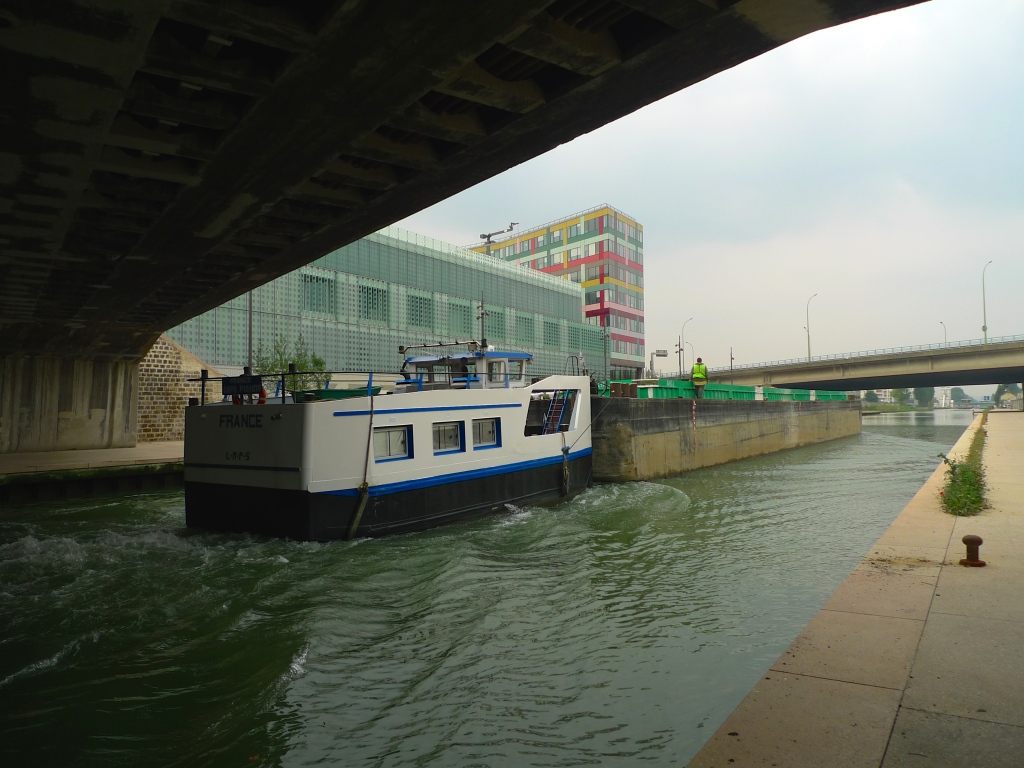 Having had a look at this new urban forest I walked back to the Pont MacDonald, crossed over and went down the steps to the canal towpath just in time to catch this barge passing under the bridge.

This type of barge is called a ‘pusher’ and it’s quite common to see them on the Canal de l’Ourcq, the Canal Saint-Denis and, of course, on la Seine. They comprise a pusher tug and barge combination combining the operational capabilities of a non-propelled split hopper barge together with the capabilities of a pusher tug. This one was empty but I was to meet it again on my walk along the canal, this time heading in the opposite direction when it was full of sand.

Pausing under the Boulevard Périphérique to record some sounds (of which more later) I happened upon this sign. The towpath along the Canal Saint-Denis forms part of l’Avenue Verte, the 406 km cycle route stretching from Paris to London, a good part of which follows special traffic-free greenways.

On the opposite side of the canal just beyond the Périphérique I came upon the shopping complex Le Millénaire which you can get to by road but it’s also served by a fleet of electric powered ferries, or navettes fluvials, which you can see and hear in Part 1 of my exploration of this canal.

On my side of the canal I discovered a wall covered in colourful graffiti.

At the end of the wall I crossed the Paris city limits into the commune of Aubervilliers and the second lock on the canal, l’Écluse des Quatre Chemins.

This lock, like all the locks on the canal, is a dual-chamber lock remotely controlled from Lock N°1, l’Écluse du Pont de Flandre, at the head of the canal. 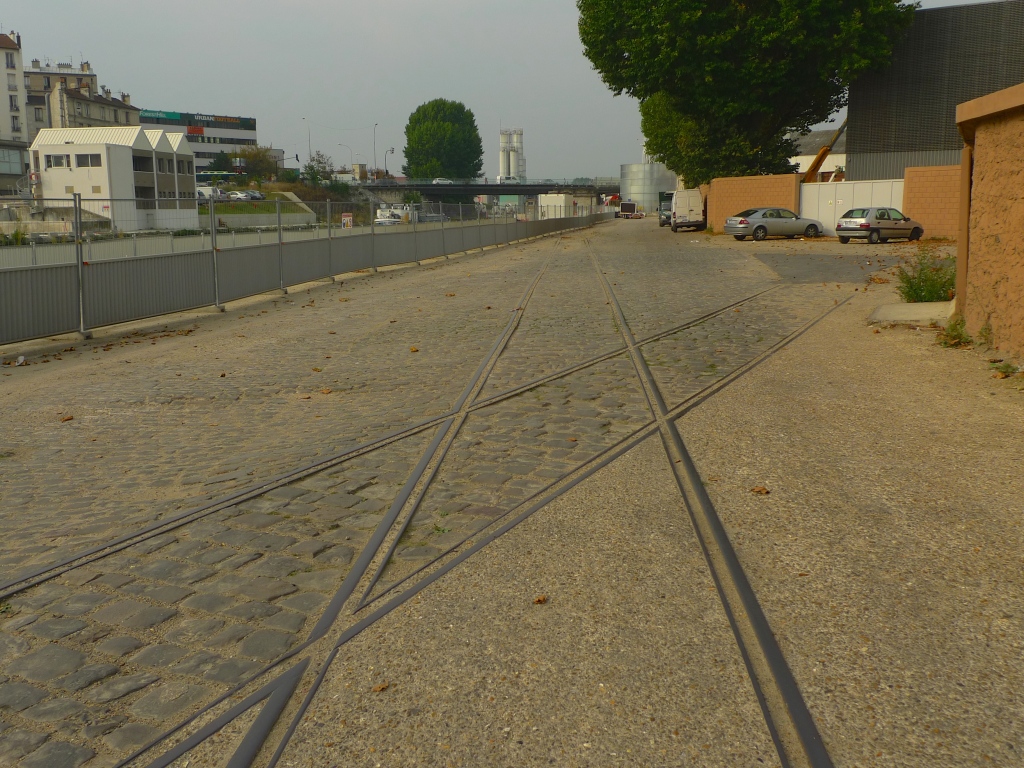 After leaving the Paris city limits, the Canal Saint-Denis crosses the western edge of Aubervilliers from south to north before reaching Saint-Denis.

Up until the early nineteenth-century Aubervilliers’ claims to fame were the miracles that were supposed to have happened in the parish in the Middle Ages and the quality of its vegetables, notably cabbages and onions, that were much sought after in the Parisian markets.

Once totally dependent upon the large, fertile, agricultural plain on which it stood, the nineteenth-century marked a turning point for Aubervilliers. The years following the arrival of the Canal Saint-Denis in 1821 and the removal of the barrières d’octroi (the tax barriers) in 1860 saw a medieval peasant village transformed into an industrial city with much of the industry centred along the canal. 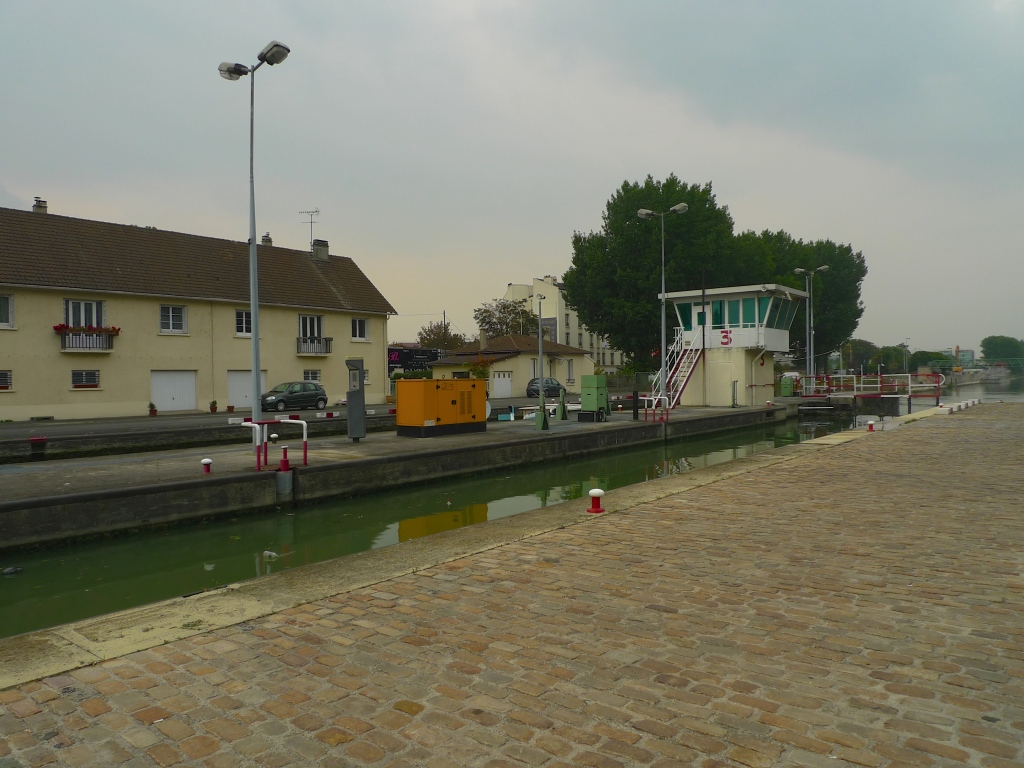 Among the industries that sprang up were factories manufacturing soap, sulphuric acid, matches (the former match factory is now preserved as an historic monument), glass, tripe, chemicals (the buildings of La Pharmacie Centrale de France still remain), and ceramic, plaster and cork tiles.

All this changed the face of Aubervilliers. At the end of the 19th century people from Belgium, Lorraine, Alsace, Brittany, Spain, and Italy arrived in successive waves seeking work in these new industries. The Quatre-Chemins district, which straddles the boundary of Aubervilliers and Pantin, was pejoratively nicknamed La Petite Prusse (Little Prussia) due to the many immigrants coming to work in the Saint-Gobain glassworks established in 1866 next to the canal.

Just as the industrial revolution changed the face of Aubervilliers, so has its de-industrialisation.

Today, the large manufacturing industries have gone to be replaced by a network of service industries including the Rhodia and Saint-Gobain research laboratories, Orange S.A., Documentation Française (housed in the former match factory), some workshops of the Paris Métro and a large RATP bus depot. New areas have developed in fields such as telecommunications, audiovisual and cinema (Euromédia, Studios d’Aubervilliers, Ciné-Lumières), and textiles and fashion (Kookai, Redskins, Hugo Boss, Afflelou, etc.). Wholesale activities have also become a strong sector with more than 300 establishments concentrated around the Port of Aubervilliers importing cheap manufactured goods (textiles, watches, toys, etc.), mainly from China, which are distributed throughout France.

But, despite the rise of these service industries, Aubervilliers still suffers the blight of de-industrialisation since most of the people employed by these industries don’t live in the commune. With a population of over 70,000, around 40% of whom are immigrants now mainly from Africa, Aubervilliers is one of the poorest municipalities around Paris. 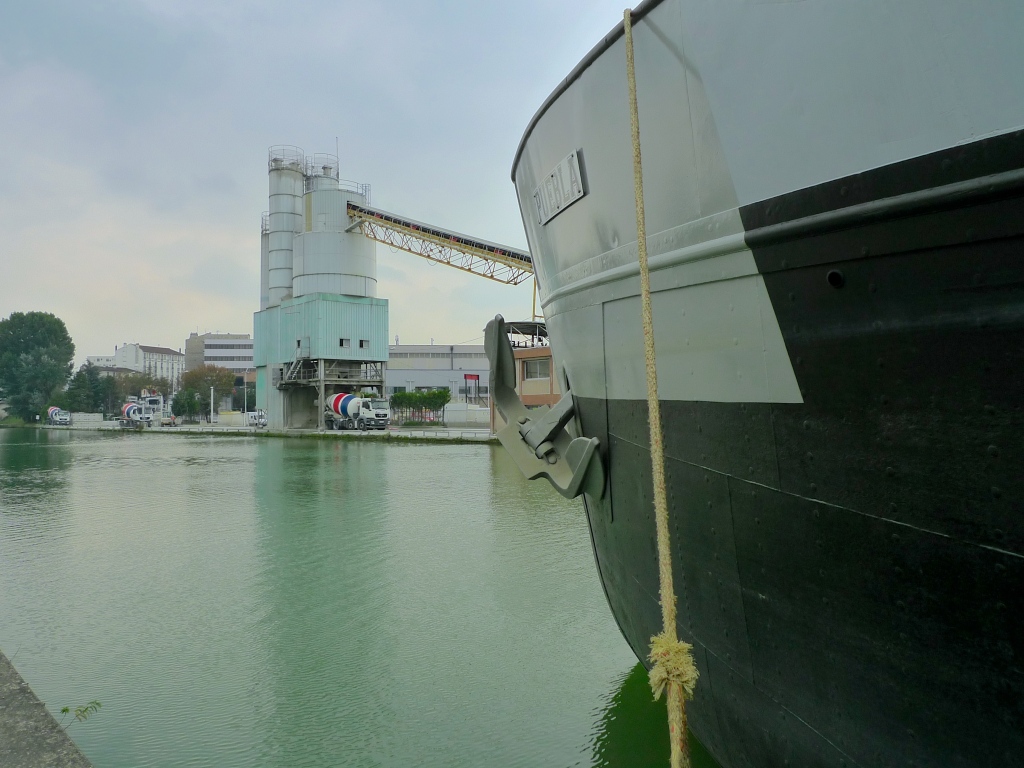 Today, it’s only the depots for cement, concrete and aggregates for use in the building industry that line this part of the Canal Saint-Denis. 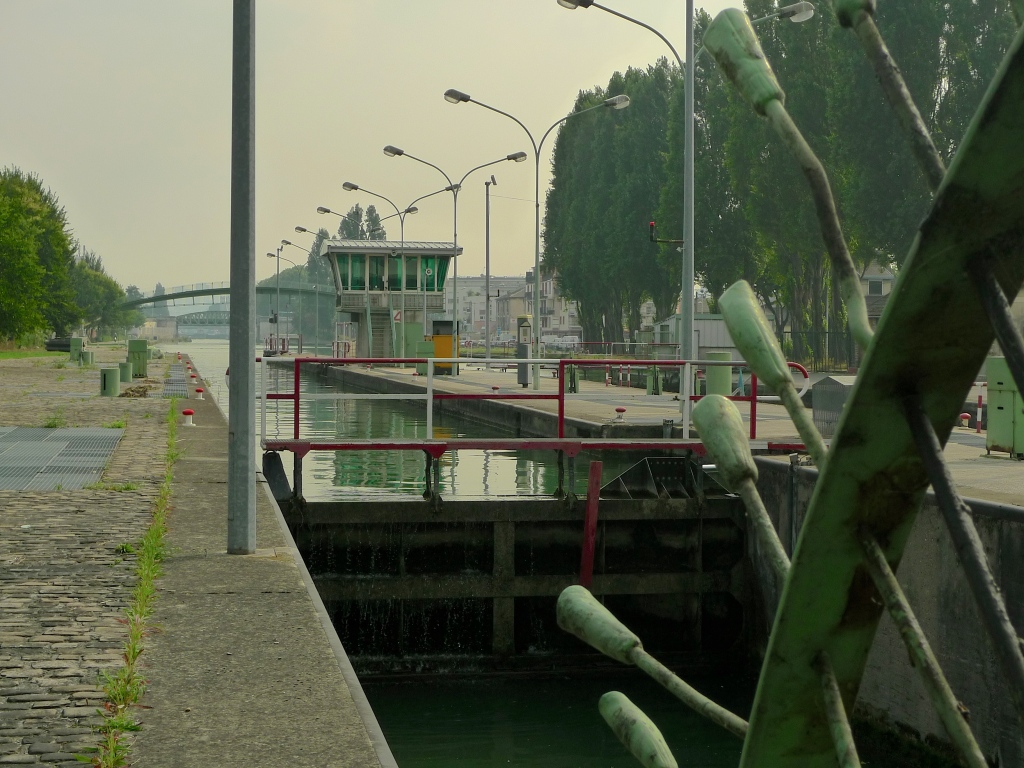 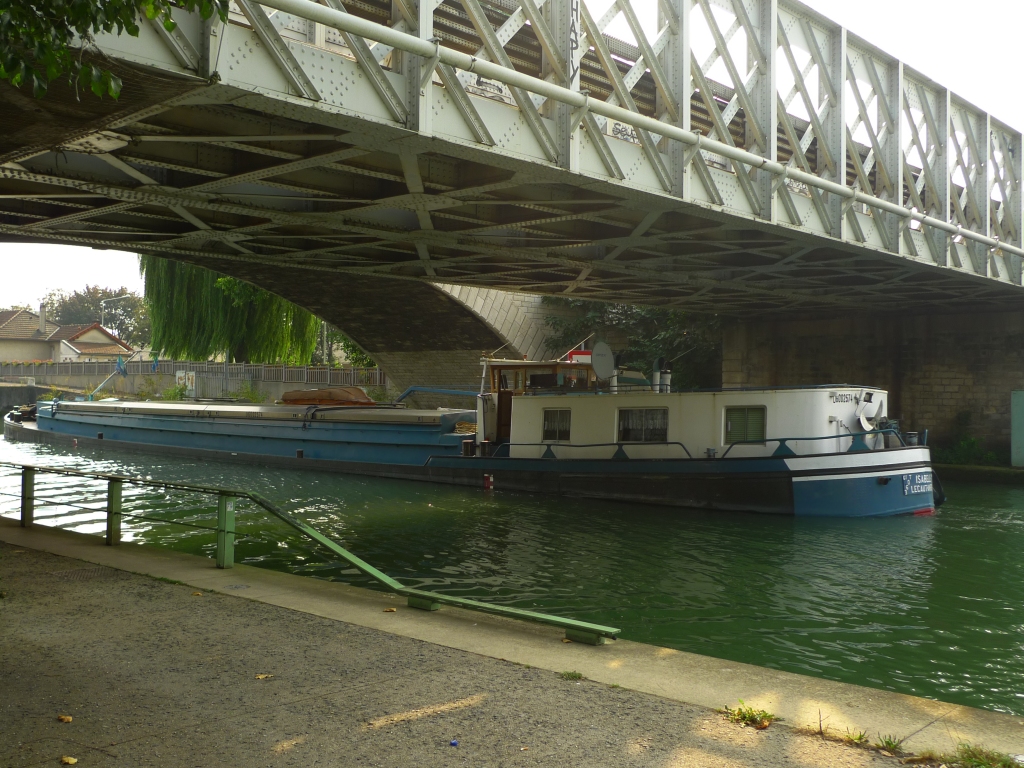 So, I’d now walked from the start of the Canal Saint-Denis in the Parc de Villette (see The Canal Saint-Denis and its Sounds – Part 1), I’d explored four of the locks on the canal, walked under six road bridges, one footbridge and one railway bridge and I’d covered a little over half the length of the canal. Now I’d come to a bridge that I couldn’t walk under, the Pont Tournant du Canal Saint-Denis, the fascinating swing bridge.

I was lucky enough to arrive as a barge was waiting to pass through and so I was able to watch the bridge in action.

The barge waited on the canal until a signal from the control room at Lock N°1, l’Écluse du Pont de Flandre, at the head of the canal set the bridge in motion. Very sedately it swung open until it was completely aligned with the opposite bank allowing the barge to pass.

Once the barge was clear, another signal set the bridge in motion once again and it began its return journey.

I took up a prime position to record the sounds as the bridge swung gently back into place. 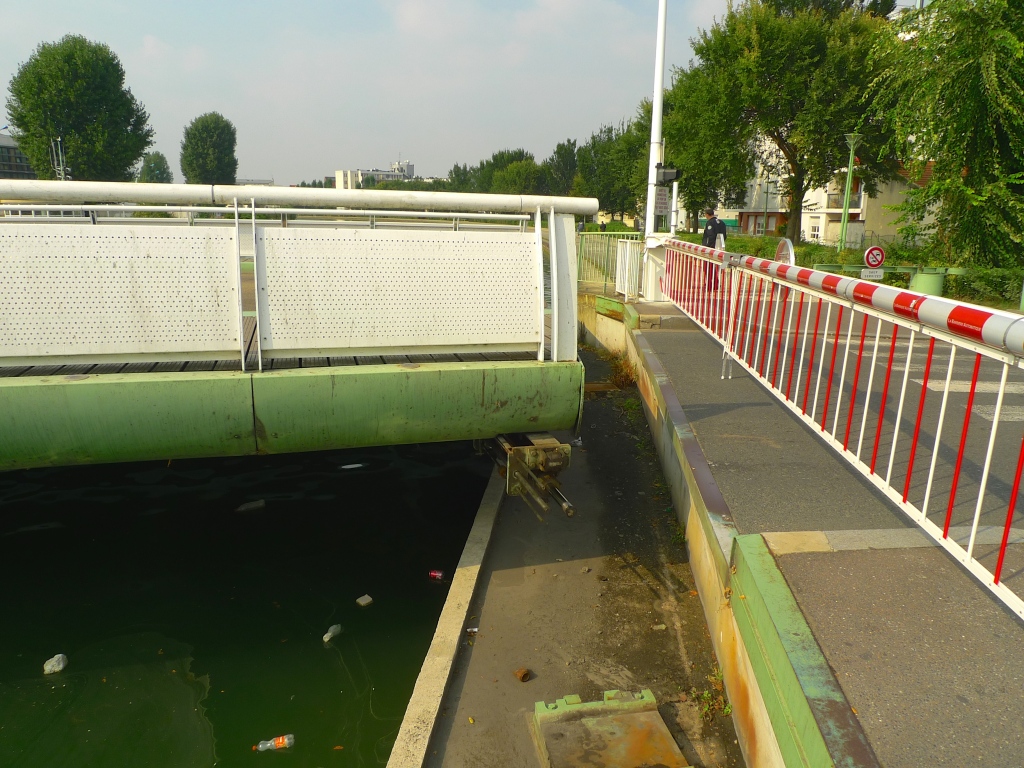 A set of hydraulic bars acted as guides to enable the bridge to slot into position.

Once returned to its place, the bridge was still higher than the adjoining roadway and so with a hydraulic driven clatter it was lowered into its final position to make a seamless connection with the road. 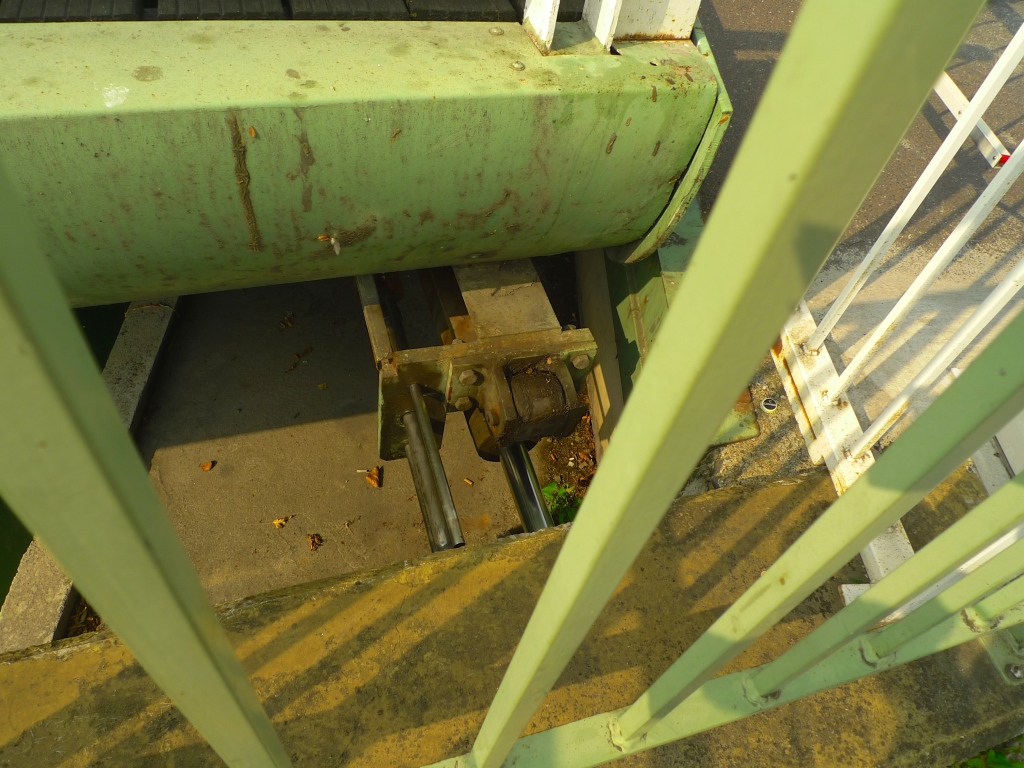 Once the bridge was locked into place, the gates were opened and the traffic began to pass.

I found all this fascinating not only to see from such close range but also to listen to, which brings me neatly onto my sound portrait of this stretch of the Canal Saint-Denis.

This sound portrait begins at the Pont MacDonald at the end of the Quai de la Gironde with the sounds of the ‘pusher’ barge passing under the bridge. Then come the curious sounds I recorded under the Boulevard Périphérique, a clattering as traffic passes overhead over a joint in the road. The delicious sounds of the engine of Puebla, a barge berthed at the side of the canal opposite the ready mix concrete works, comes next with the purring sound of the barge’s engine interspersed with the whistling sounds of trucks reversing under the ready mix concrete hoppers. Next are the sounds of a barge manoeuvring into l’Écluse des Vertus accompanied by the sounds of trains crossing the railway bridge overhead.

And then … well, then comes what will undoubtedly be one of my sounds of the year – the sounds of the barge passing and then the Pont Tournant du Canal Saint-Denis closing. Capturing sounds like these make all the countless hours I spend walking in and around Paris hunting for sounds worthwhile.

Next time, I will complete my journey along the Canal Saint-Denis from this swing bridge to Lock N° 7, l’Écluse de la Briche, where the canal discharges into la Seine. That will include exploring three more locks, walking under two more road bridges, one of which is absolutely huge, two footbridges and a railway bridge as well as pausing on the way to look at France’s National Stadium, the Stade de France, and the commune of Saint-Denis.