I SPEND QUITE A LOT of time in churches, especially Parisian churches.

I am interested in church architecture, I’m fascinated by the history of individual churches and I enjoy exploring the sounds of churches. One strand of my Paris Soundscapes Archive is dedicated to the sounds of Parisian churches. I have a particular interest in the work of the master organ builder, Aristide Cavaillé-Coll, and the organs he built for Parisian churches and while I’ve made many recordings of these Cavaillé-Coll organs I also record the ambient sounds in churches, especially when they’re empty. In my experience, there are no silent churches in Paris: even without services taking place, without the organ playing and with no people, there are still sounds. It’s as though the very fabric of each church speaks to the attentive listener.

Apart from weddings and funerals (more of the latter than the former these days unfortunately) I seldom go to churches other than to explore their architecture, history and sounds. Imagine my surprise then when, thanks to a confluence of interests, I found myself, despite not being of the Roman Catholic persuasion, attending a Roman Catholic mass yesterday morning. 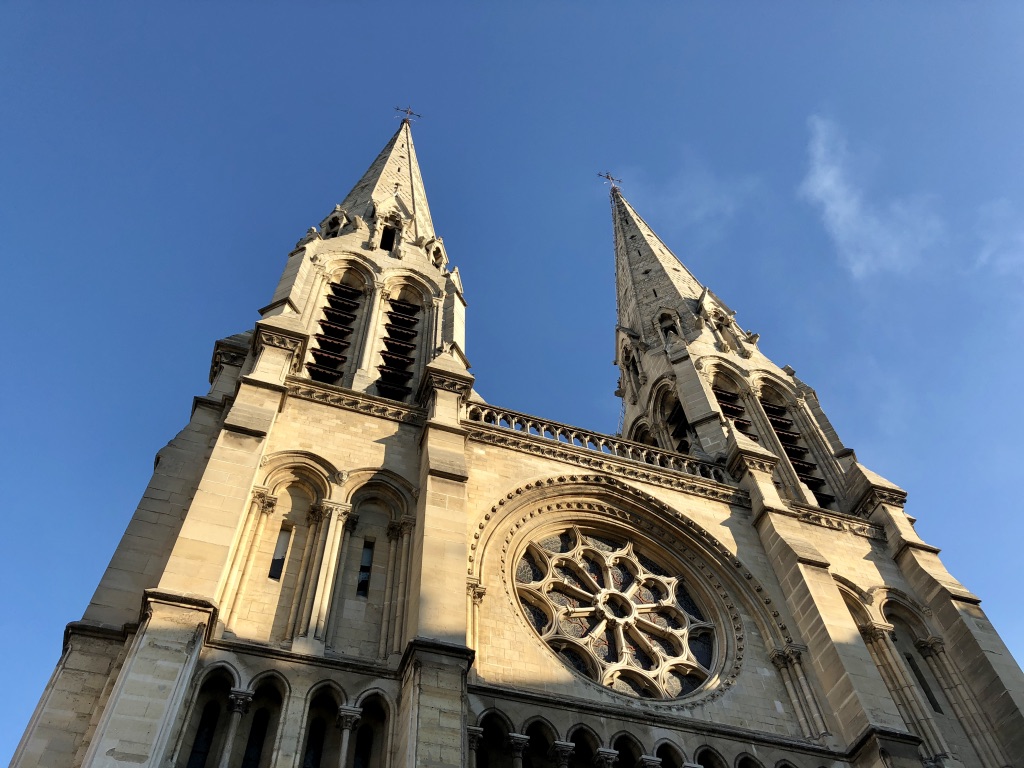 The twin-spired Église Saint Jean-Baptiste de Belleville has been on my Parisian church exploration ‘to-do’ list for some time. It was built between 1854 and 1859 in the neogothic style by the architect Jean-Baptiste-Antoine Lassus, an expert in the restoration and recreation of medieval architecture, and it replaces a chapel built in 1543 and the first Saint-Jean-Baptiste church dating from 1635.

Saint-Jean-Baptiste de Belleville was one of the first churches in Paris to be built in the neogothic style, which in itself was a good enough reason to visit it, but the fact that it also has a two-keyboard Cavaillé-Coll organ dating from 1863 was an added attraction. 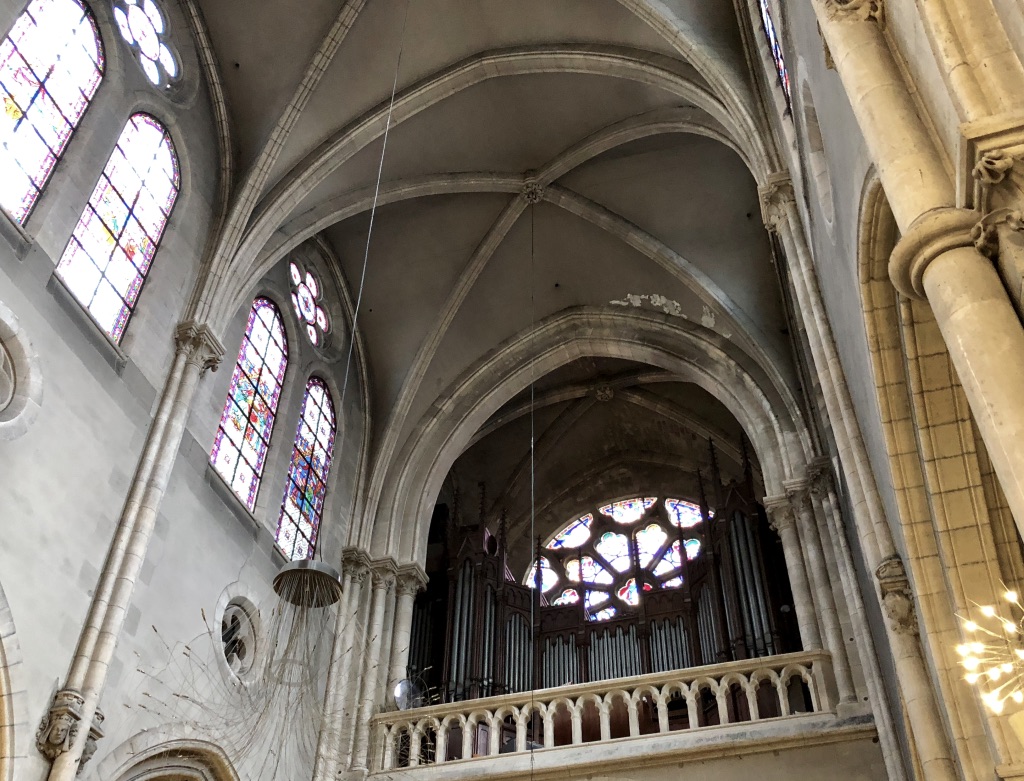 One of the things I knew about the church was that Edith Piaf, the French cabaret singer, songwriter and actress, was baptised here on the 15th December 1917. 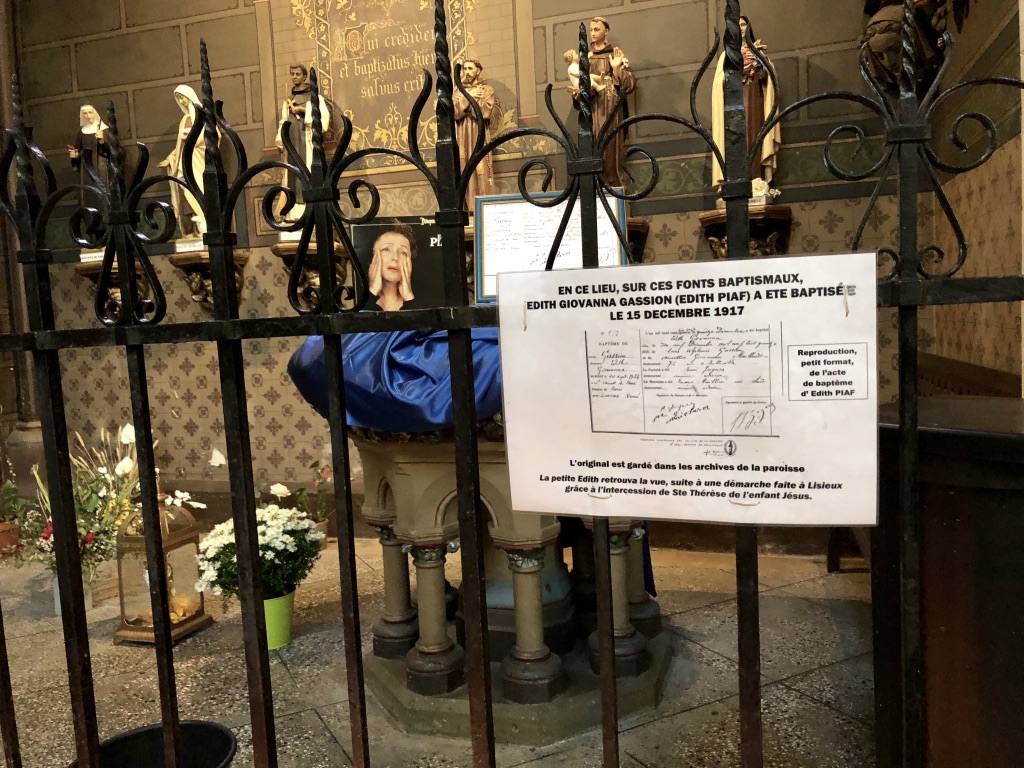 It was this confluence of interests: the neogothic l’église Saint-Jean-Baptiste de Belleville, a Cavaillé-Coll organ, my enthusiasm for Edith Piaf, in my view one of the greatest performers of the 20th century, together with the sound-rich environment of Belleville that brought me to this place yesterday morning where, to commemorate the 54th anniversary of her death, a Messe à la memoire d’Edith Piaf took place in the church supported by Les Amis d’Edith Piaf.

During the Mass the organ played and, of course, I had to record it for my archive. From my recording I’ve produced the following sound piece of some of the music played, which illustrates some of the voices and textures of the Cavaillé-Coll organ and gives a flavour of the Mass itself.

The Cavaillé-Coll organ of the Église Saint-Jean-Baptiste de Belleville:

The piece opens with the full-throated Entrée. The tone changes for the next piece, the music for the Offertoire. Then comes the music for the Communion, an improvisation on “Non, je ne regrette rien”, a French song originally composed by Charles Dumont, with lyrics by Michel Vaucaire, always associated with Edith Piaf’s 1959 recording of it. The Sortie comprises a short organ piece followed by the lady herself singing “Hymne à l’amour” for which she wrote the words and Marguerite Monnot the music. 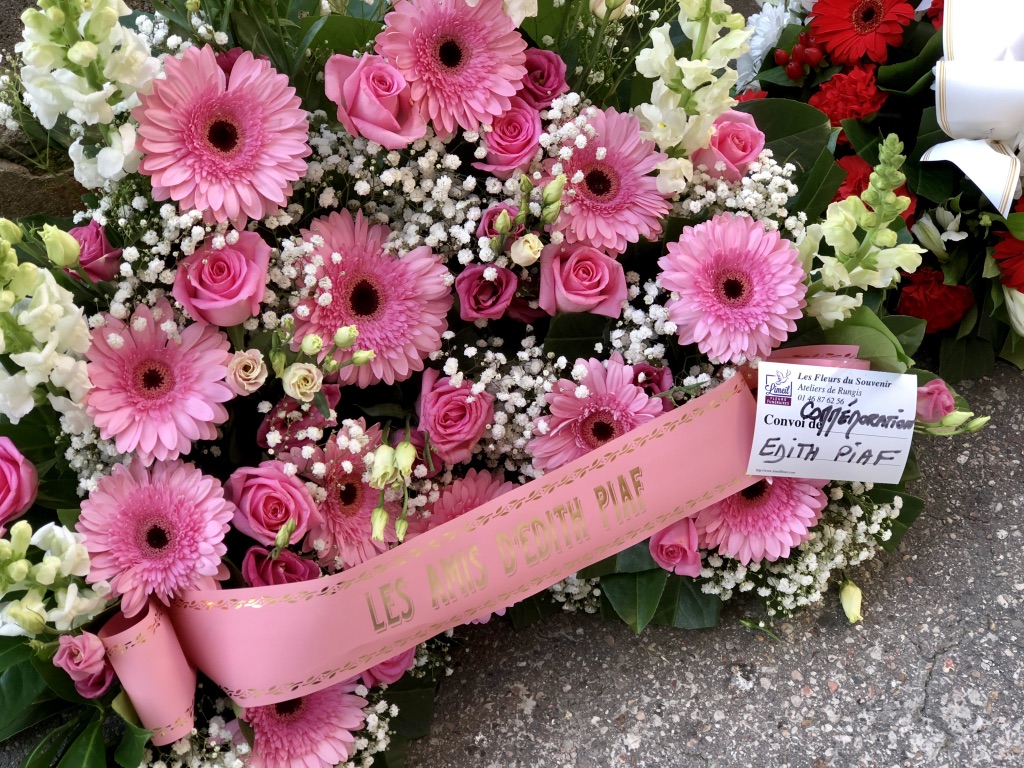 I am old enough to remember listening to Edith Piaf on the radio and I can remember her funeral bringing Paris to a standstill being headline news. For some of her short life she lived just round the corner from where I live now.

Sitting in the church yesterday morning next to the font where she was baptised and with her voice echoing around the church, it seemed ironic that, because of her lifestyle, the Catholic Church denied her a funeral mass when she died – they branded her ‘a categorical sinner’. Instead, her coffin was carried through the streets of Paris to be buried at the Père Lachaise cemetery with only a token blessing.

It was only on 10th October 2013, fifty years after her death, that the Roman Catholic Church gave her a memorial Mass in l’église Saint Jean-Baptiste in the parish in which she was born.

I don’t propose to document the life of Edith Piaf here; a quick search of Edith Piaf on Google will tell you much of what you need to know about her.

What I can say is that it is said she was born on the steps of N° 72 rue de Belleville on 19th December 1915. Her birth was registered at the Hôpital Tenon, next to what is now Place Edith Piaf in the 20th arrondissement, under the name Edith Giovanna Gassion.

In 2013, a statue of Edith Piaf, known as l’Hommage à Piaf, created by the French sculptor, Lisbeth Delisle, was inaugurated in the Place Edith Piaf. 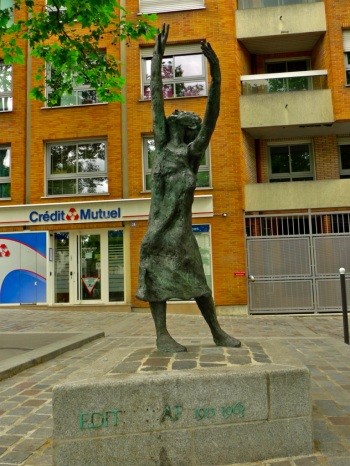 Following yesterday’s Mass in Belleville I went to Place Edith Piaf to take in the atmosphere. I found a street market in full swing with some sounds that Edith herself might have been familiar with. 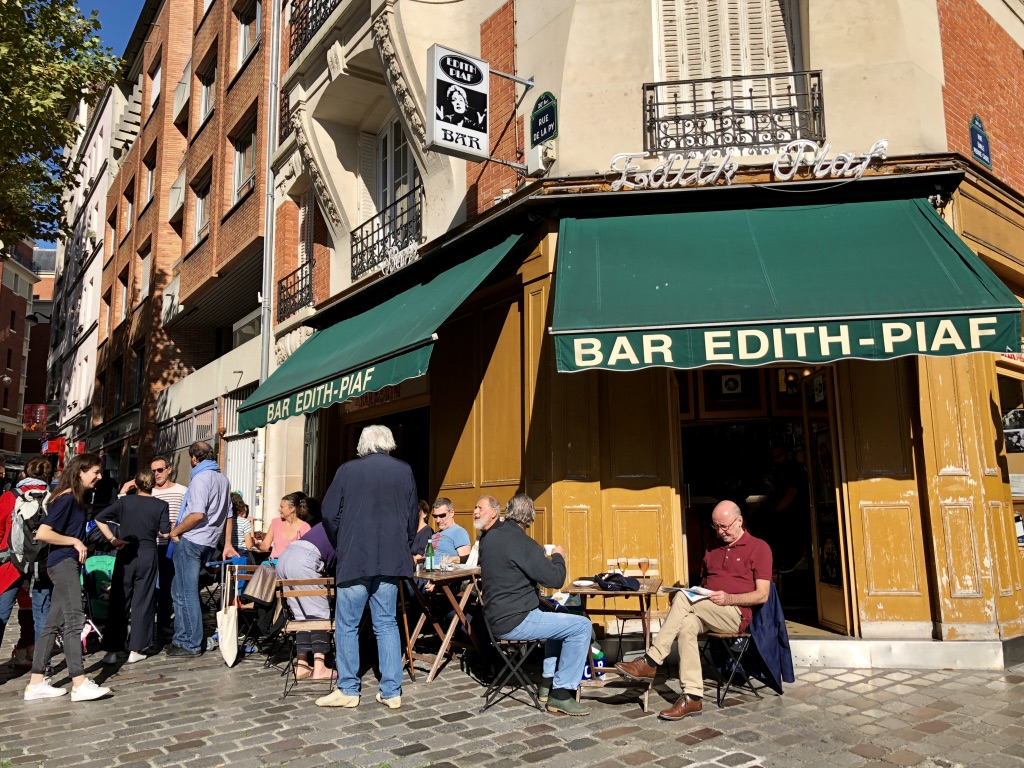 I couldn’t possibly end my own hommage to Edith Piaf yesterday without visiting her grave in the Cimetière du Père Lachaise.

She died on 10th October 1963 at the age of 47. Denied a funeral mass by the Catholic Church, some 10,000 people came to the cemetery to witness the interment of La Môme Piaf (‘The Little Sparrow’).

Edith Piaf was interred in the same grave as her father, Louis-Alphonse Gassion, and Theophanis Lamboukas, (Théo Sarapo), whom she married in 1962. She is buried next to her daughter, Marcelle, who died of meningitis at the age of two.

Of the 70,000 graves in the Cimetière Père Lachaise, Edith Piaf’s remains one of the most visited.

Like the fabric of an empty church, cemeteries speak to the attentive listener.

The sounds around Edith Piaf’s grave: 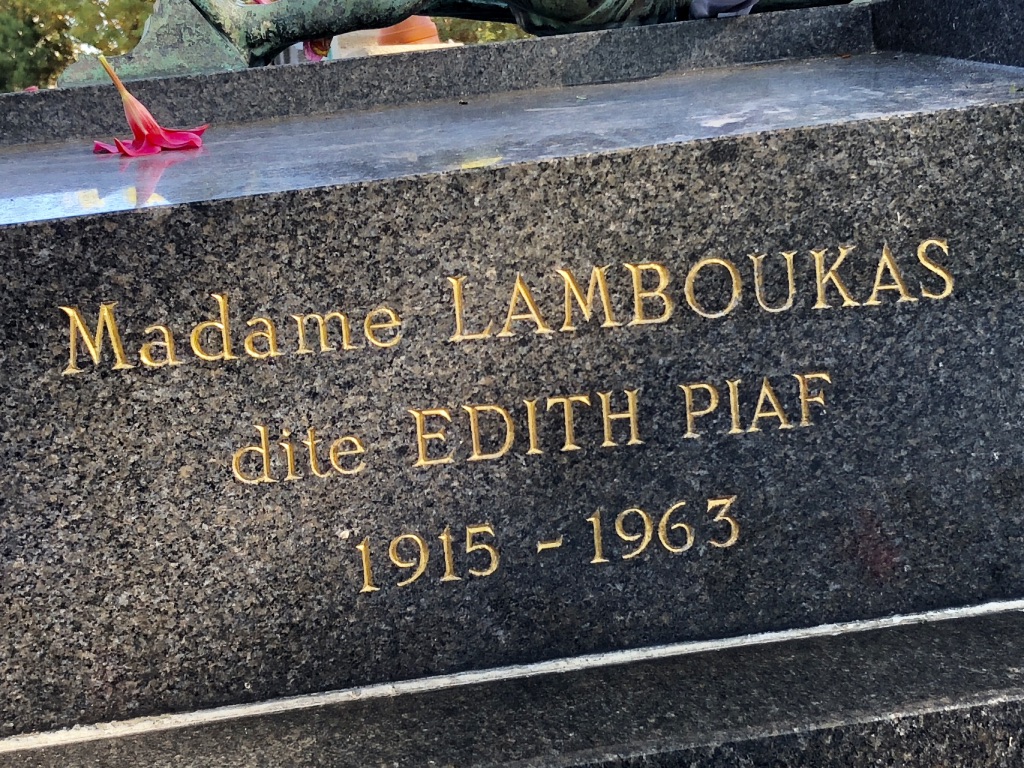 “Every damn thing you do in this life, you have to pay for.”

(“I do not repent having given myself up to love.”)