The Parc de Bagatelle and its Sounds

IN THE WAKE OF the disappointing news that the UK had voted to leave the European Union in the recent BREXIT referendum I was in need of a distraction so I went to one of my favourite gardens in Paris, the Parc de Bagatelle.

Along with the Jardin des Serres d’Auteuil, the Parc Floral de Paris and the Arboretum de l’école du Breuil, the Parc de Bagatelle is one of the four jardin botanique de la ville de Paris.

Located on the western end of the Bois de Boulogne, the 24-hectare (59-acre) Parc de Bagatelle is a naturalistic English landscape style garden complete with a neoclassical château, an obelisk, a pagoda, grottoes, waterfalls and sham ruins.

The Château de Bagatelle was built on the site of a former hunting lodge originally built for the Maréchal d’Estrées in 1720. In 1775, the hunting lodge was acquired by the Comte d’Artois, younger brother of Louis XVI, who planned to demolish the decaying structure and replace it with something grander. Work began on the new château in September 1777 but in rather unusual circumstances.

Louis XVI’s Queen, Marie-Antoinette, wagered the Comte d’Artois, her brother-in-law, that the new château could not be completed within three months. The Comte accepted the wager and engaged the neoclassical architect François-Joseph Bélanger to design the building and begin construction. Some eight hundred workers were drafted in, around three million livres were spent and the new château was completed in just 63 days. Included in the design was a formal garden surrounding the château, which was subsequently expanded by the Scottish botanist and gardener, Thomas Blaikie, into the Parc de Bagatelle. 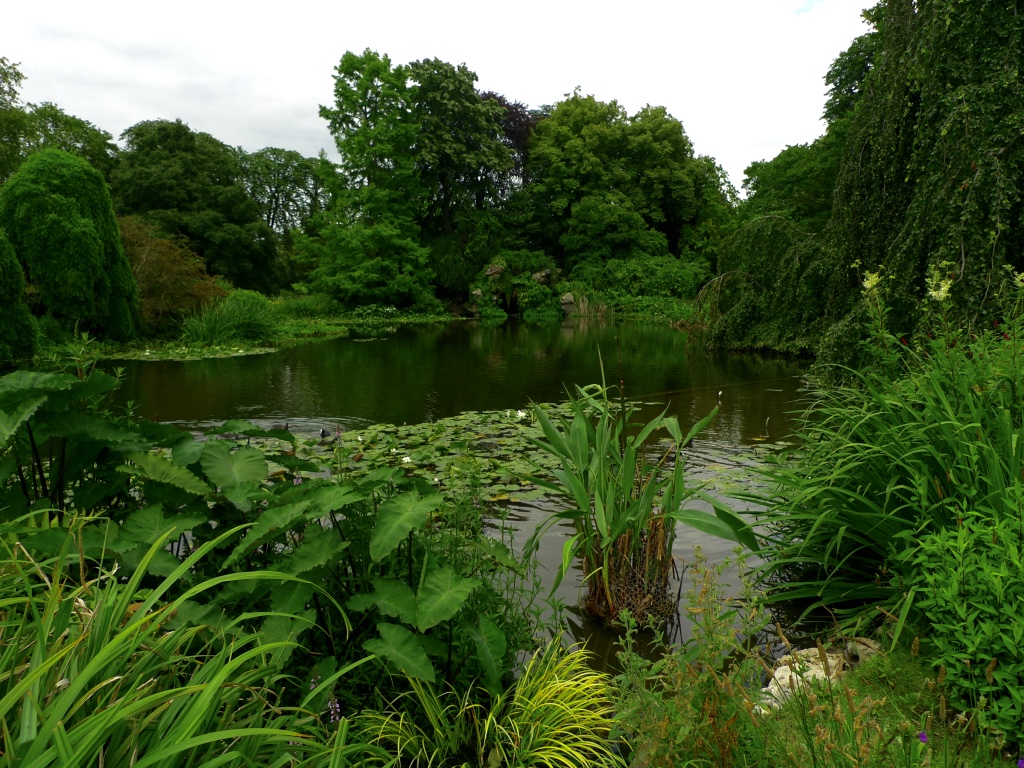 Having escaped the ravages of the French Revolution, the Bagatelle changed hands several times before being bought in 1835 by Francis Seymour-Conway, 3rd Marquess of Hertford, a British Tory politician and art collector. When he died in 1848, the Château de Bagatelle was inherited by his son, Richard, the 4th Marquess. Lord Hertford was brought up in Paris by his mother who had become estranged from his father. They lived in a large apartment in Paris and also at the Château de Bagatelle. Their London home was in Manchester Square, now home to the Wallace Collection, which houses the Hertford’s art collection much of which came from the Château de Bagatelle.

In 1905, the Château de Bagatelle and the park were purchased by the City of Paris and the French landscape architect, Jean-Claude Nicolas Forestier, began redeveloping the gardens while retaining their style.

One of the sentry pavillions

Walking around the Parc de Bagatelle was a perfect way to escape my post-BREXIT referendum depression. I even found a new friend to confide in together with a ‘small model’ version of a Wallace fountain.

Sounds of the Parc de Bagatelle:

The soundscape of the northern half of the Parc de Bagatelle is dominated by the sounds of waterfalls and the distinctive sounds of the magnificent pride, muster or ostentation of peacocks (depending upon which collective noun you prefer) that roam freely over the park.

As well as its neoclassical château and renowned gardens, including a magnificent rose garden with 10,000 rose bushes comprising 1,200 different species, the Parc de Bagatelle has other claims to fame.

In 1777, to celebrate the completion of the château, a party was held in honour of Louis XVI and Marie-Antoinette during which a new table game was revealed. It comprised a small billiard-like table with raised edges and cue sticks, which players used to shoot ivory balls up an inclined slope with fixed pins. Count d’Artois dubbed the game bagatelle and it was soon to become fashionable throughout France. This 18th century French invention was to evolve into the modern day pinball machine.

And to continue the game theme, the Bagatelle hosted the first French Rugby Union Championship match in 1892 and some of the polo events in the 1924 Olympic Summer Games.

In 1906 an historic event took place.

On 23rd October 1906, the pioneering Brazilian aviator, Alberto Santos-Dumont, repeated the feat. In the grounds of the Château de Bagatelle he succeeded in flying a heavier-than-air aircraft for a distance of 60 metres (197 ft) at a height of about five meters (16 ft). This was the first flight of a powered heavier-than-air machine in Europe to be verified by the Aéro-Club de France.

On 12th November 1906, also in the grounds of the Château de Bagatelle, Santos-Dumont set the first world record recognised by the Federation Aeronautique Internationale, by flying 220 metres (722 ft) in 21.5 seconds

The 14 Bis, the canard biplane flown by Alberto Santos Dumont in 1906

A less well-known fact is that Santos-Dumont was indirectly responsible for the invention of the wrist watch.

While dining with his friend Louis Cartier in Paris, Santos-Dumont complained of the difficulty of checking his pocket watch to time his performance during flight. He asked Cartier to come up with an alternative that would allow him to keep both hands on the controls. Cartier went to work on the problem and the result was a watch with a leather band and a small buckle to be worn on the wrist.

You don’t need ‘green fingers’ to enjoy the Parc de Bagatelle. For those with a keen interest in gardens and gardening the significant trees and plant species are clearly labelled so you can discover new things and add to your knowledge, but for the rest of us, the history, the wildlife and the tranquillity is sufficient to escape the tribulations of everyday life.

And it’s certainly a perfect antidote to BREXIT – even the peacocks seem to talk more sense than most politicians.