Posts from the ‘Boulevard Barbès’ Category

Open Your Eyes by Following the Sounds

I’VE SAID MANY TIMES in this blog that soundwalking is a superb way to explore a place, especially a place as rich and diverse as Paris. Whilst ‘pure’ soundwalking involves concentrated listening to the exclusion of almost everything else, a soundwalk can also be the key to a wider exploration of a place especially if you use your curiosity to follow the sounds and see where they lead. Over the last few days I’ve been soundwalking along the Boulevard Barbès and the surrounding area in the 18th arrondissement. This is a part of Paris well off the tourist track and a part of the city that I find endlessly fascinating. In this post I will show how even a fairly short soundwalk, in this case a walk along part of the Boulevard Barbès, can lead to discovering things that may be hidden, but if you follow the sounds and engage your curiosity the hidden can often emerge into plain sight.

A soundwalk along part of the Boulevard Barbès:

Named after the French Republican revolutionary Armand Barbès, the Boulevard Barbès is a product of Baron Haussmann’s transformation of Paris in the mid-nineteenth century. Once home to the sumptuous Grands Magasins Dufayel, which, on the eve of the First World War advertised itself as being the largest department store in the world, the grands magasins elegance of the Boulevard Barbès has now faded. Today, the Grands Magasins Dufayel, originally known as Le Palais de la Nouveauté until the ambitious Georges Dufayel took it over in 1888 and named it after himself, is occupied by the BNP bank and a good part of the street is filled with small shops selling mobile phones, jewelry, luggage, clothes and shoes all at bargain prices.

The entrance to the former Grands Magasins Dufayel in Rue Clignancourt

Even if the Boulevard Barbès has gone somewhat down market since the grandeur of La Belle Époque it is still not without interest.

Crossing the bottom of the street between what is now the TATI store on one side and the Brasserie Barbès on the other once ran the Barricade rue du Faubourg Poissonnière, one of the most imposing and one of the last barricades to fall during the 1848 Revolution, which ended the Orléans monarchy (1830–1848) and led to the creation of the French Second Republic.

This was once the Bal du Grand Turc, founded in 1806 by Joseph Teiche and frequented by Alexander Dumas père and Emile Zola amongst others. Emile Zola refers to the Bal du Grand Turc in his novel L’Assomoir. It then became the Concert de la Fourmi, one of several café-concerts in the area. Maurice Chevalier performed here in 1902, early in his professional career. 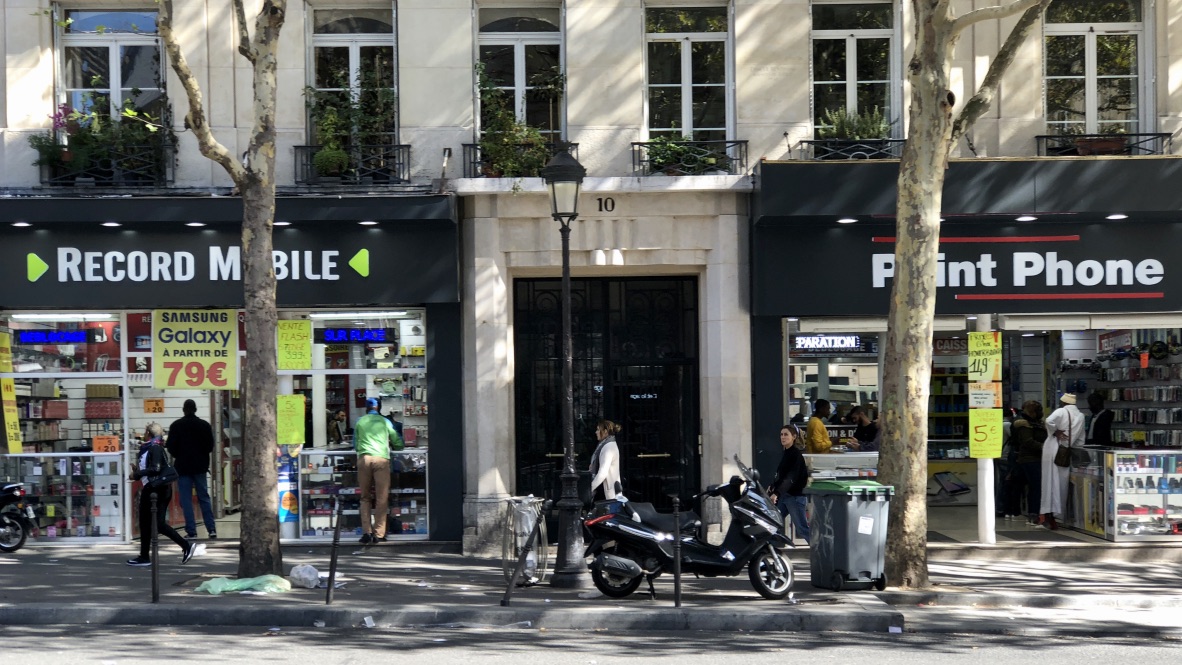 A little further up the Boulevard Barbès we come to N° 28. This was the residence of Irénée Cazals, a liaison officer in the Confraternity Notre-Dame network of the French Resistance during the Second World War.

Founded towards the end of 1940, the Confraternity Notre-Dame was an information-gathering network that rallied to the Free French. It was one of the first and probably the most important intelligence network of the Resistance. Its agents were charged with gathering military or economic and political information that provided content for Free French radio broadcasts and providing liaison and radio operators who facilitated outgoing information and incoming orders.

The Confraternity Notre-Dame operated for three and a half years and during that time 1,544 agents signed on; 524 were arrested, of which 234 were deported, 37 shot, and 151 died while deported. Irénée Cazals was arrested on the 17th November 1943 and deported on the 29th November. He survived the war.

And now we come to a shoe shop at N° 34 Boulevard Barbès, one of several shoe shops along the street.

KATA is an outlet store with shoes piled into bins and sold at bargain prices complete with signs saying, ‘No Refunds’. But behind the undistinguished shop front KATA is much more than a shoe shop: it’s an aberration, an urban anachronism.

The shoe shop occupies what was once the Barbès Palace Cinema and when they moved in to the premises in 1988, KATA was persuaded to retain the Belle Époque architecture and fit the shop around it.

This cinema built in 1914 by the French architect Louis Garnier seated 1,200 people making it one of the top cinemas in the city. It was built in the Belle Époque style and the stage, complete with red velvet curtains, the ionic columns, the neo-classical balconies and the double staircase leading up to them are all still in place. 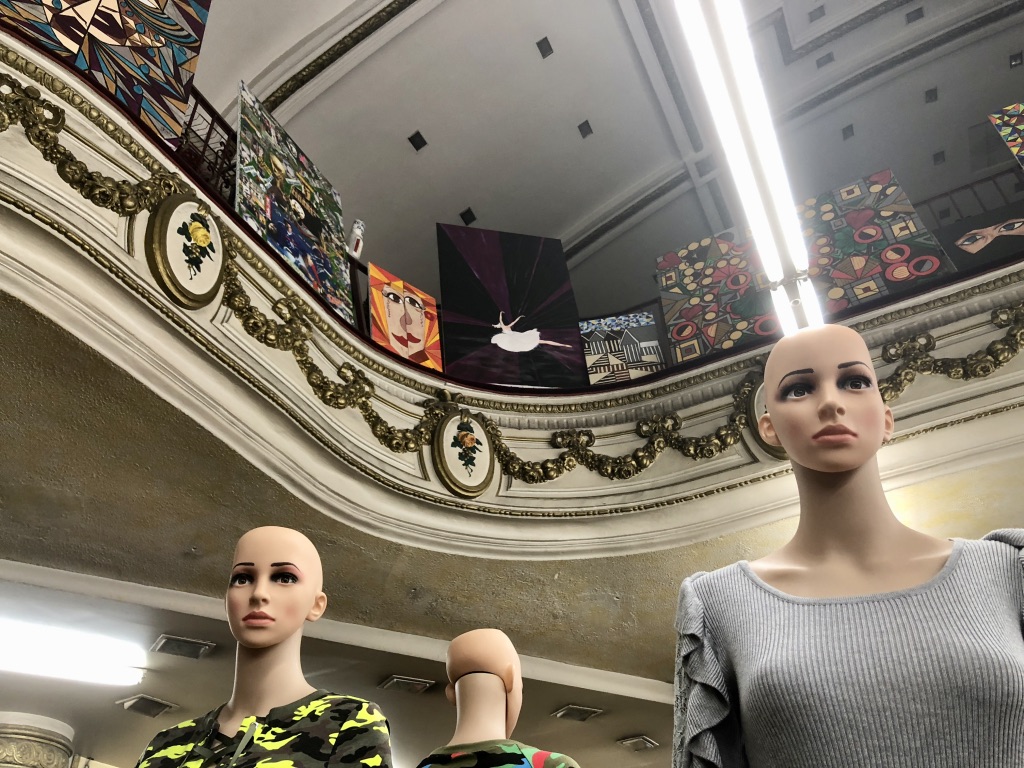 In the early twentieth century cinemas proliferated so the residents around the Boulevard Barbès were spoiled for choice. As well as the Barbès Palace they had the Luxor, (now completely restored and reopened), the Palais-Rochechouart (now Darty), the Delta (now Guerrisol), the Myrha (now an Evangelical Church) and the Gaîté-Rochechouart (now Célio), all within walking distance.

In its early days the Barbès Palace was still influenced by the music hall so it had its own orchestra to provide musical interludes during the programme.

It also had an eye on commercial opportunities so it promoted advertising for a wide range of products and services.

The final curtain fell on the Barbès cinema on 30th July 1985 with the programme for that week including Ninja Fury and Excès érotiques.

The cinema was built with two means of access: 34 Boulevard Barbès and 9 Rue des Poissonnièrs.

One of my soundwalks comprised a walk along the Rue des Poissonnièrs, into the shoe shop and then out into the Boulevard Barbes. Unfortunately, the ambience inside the shop is tarnished by strips of harsh neon lighting stretching over the displays of shoes and the music playing over loudspeakers scattered around the store.

A soundwalk from Rue des Poissonnièrs to Boulevard Barbès via the KATA store: