ONE YEAR AGO I stood in place de la Bastille amongst a jubilant crowd as they received the news that François Holland had been elected Président de la République, the first French socialist president to have been elected since François Mitterand back in 1981.  I produced a piece for this blog about that evening in which I said, “As 8.00 pm approached the excitement became palpable and when the result became clear the party began.”

One year on and the party’s over, the excitement has evaporated and the opinion polls show that François Hollande is now the most unpopular president in modern French history.

On Sunday crowds once again filled place de la Bastille, not to celebrate but to protest at what they see as betrayal. In a nutshell, their argument is that François Hollande was elected last May on the back of a promise to spare France the austerity measures imposed elsewhere in Europe. Instead, the French government has cut spending, increased taxes, reduced hiring in the public sector and introduced plans to allow companies to cut workers’ hours during economic downturns.  Meanwhile, France’s economy has continued to deteriorate, with growth stagnating and unemployment rising above 10%. 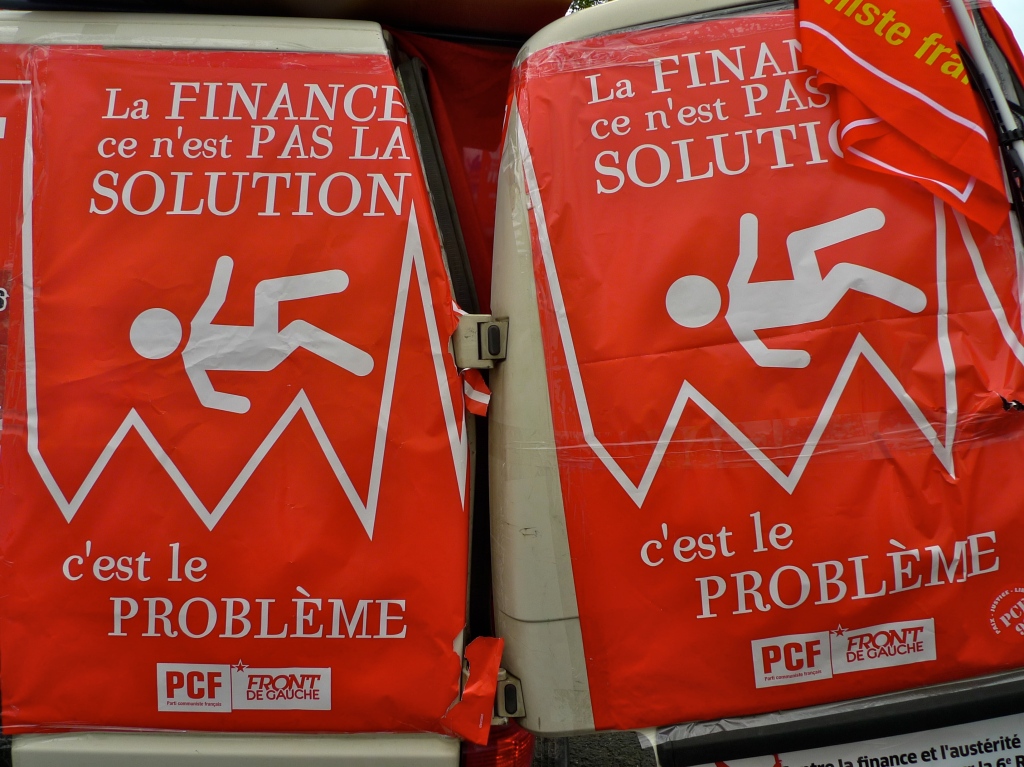 Tens of thousands of protestors took to the streets on Sunday. According to the police they numbered 30,000 while the organisers, Le Front de Gauche, put the figure at 180,000. How the police and demonstration organisers always come up with such widely varying estimates of crowd numbers continues to baffle me. All I can say is that I was in place de la Bastille when the demonstration moved off on its march to place de la Nation and I was there three hours later as the tail end of the march was just setting off.

This demonstration was the brainchild of Jean-Luc Mélenchon, leader of the Front de Gauche coalition. One time government minister and member of the French Senate, Mélenchon has been a member of the European Parliament since 2009. He now heads the Front de Gauche comprising the Unitarian Left (Gauche Unitaire), the Federation for a Social and Ecological Alternative (Fédération pour une alternative sociale et écologique, FASE), Republic and Socialism (République et socialisme), Convergences and Alternative (Convergences et alternative), the Anticapitalist Left (Gauche anticapitaliste), the Workers’ Communist Party of France (Parti communiste des ouvriers de France, PCOF) and The Alternative (Les alternatifs).

Jean-Luc Mélenchon came to national prominence in 2010 during the huge demonstrations against pension reform and in 2012 he represented Le Front de Gauche in the French presidential election where he came in fourth place with 11.05% of the vote.

Marching under the banner Marche citoyenne pour la 6e République, the Front de Gauche want to see, according to one of the leaflets handed to me, a sweeping away of the current constitution and fundamental change to the way things are done – an end to the dominance of the financial markets, a democratisation of the institutions, more power to the people, new and greater rights to employees, a democratisation of elections with proportional representation and genuine independence of justice without conflicts of interest. 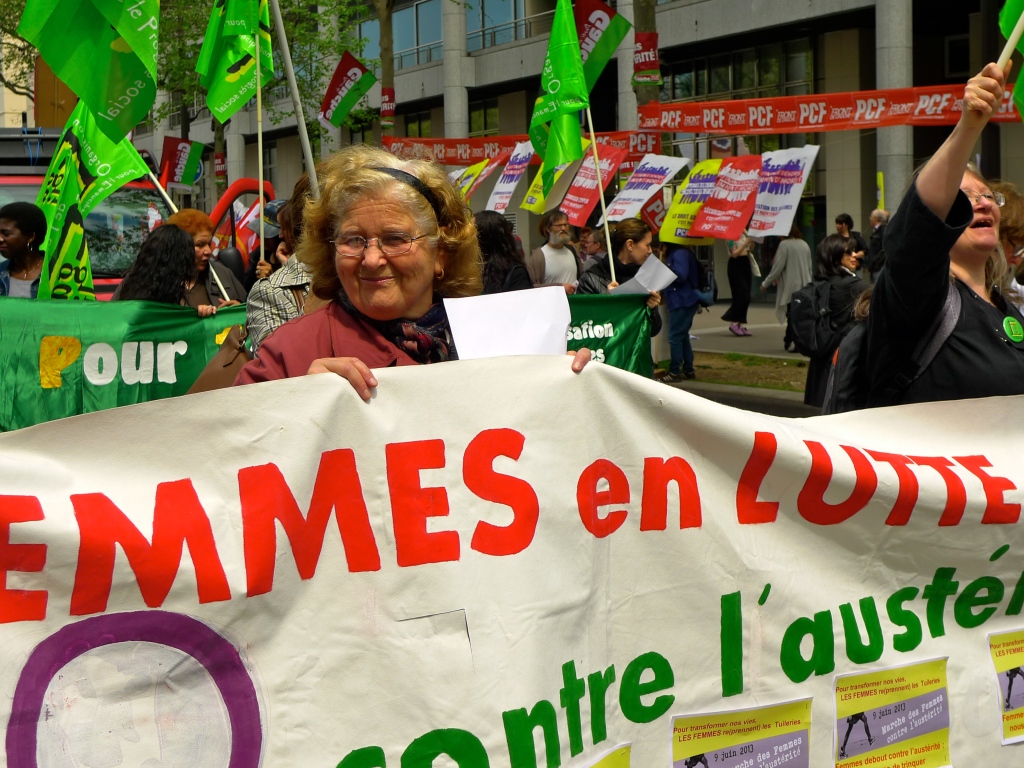 These street demonstrations are always colourful and loud and for the most part good-natured, although I will have something to say about that in a moment.

On Sunday there was the usual mix of serious minded protestors, occasional eccentrics and endless loudspeaker vans blasting out slogans and music at full volume often drowning out the chants of the marchers. The cacophony of sound can be overpowering especially to promiscuous microphones that pick up anything and everything. So for the sound hunter, capturing the atmosphere of such large demonstrations is a challenge.

In the sound piece above I’ve tried to give you a flavour of the atmosphere and to highlight some of the distinctive sounds. In the next piece, I will give you a flavour of what it’s like to walk amongst a crowd of tens of thousands of people. It’s a walk from the Opéra Bastille to rue de la Roquette, which on a normal day takes about two minutes. On Sunday it took me closer to twenty minutes (and I was lucky to do it that quickly) as I weaved my way through the throngs of people.

My final sound piece though tells a different story.

As I said earlier, street demonstrations in Paris are usually pretty good-natured and pass off without any trouble. The largest demonstration I’ve attended was the massive protest against pension reform in 2010 when one million people took to the streets. Even with a demonstration of that size and with passions running very high, I saw nothing that could be described as trouble. On Sunday though, I saw something I’ve never seen before and I also learned something about the Front de Gauche. 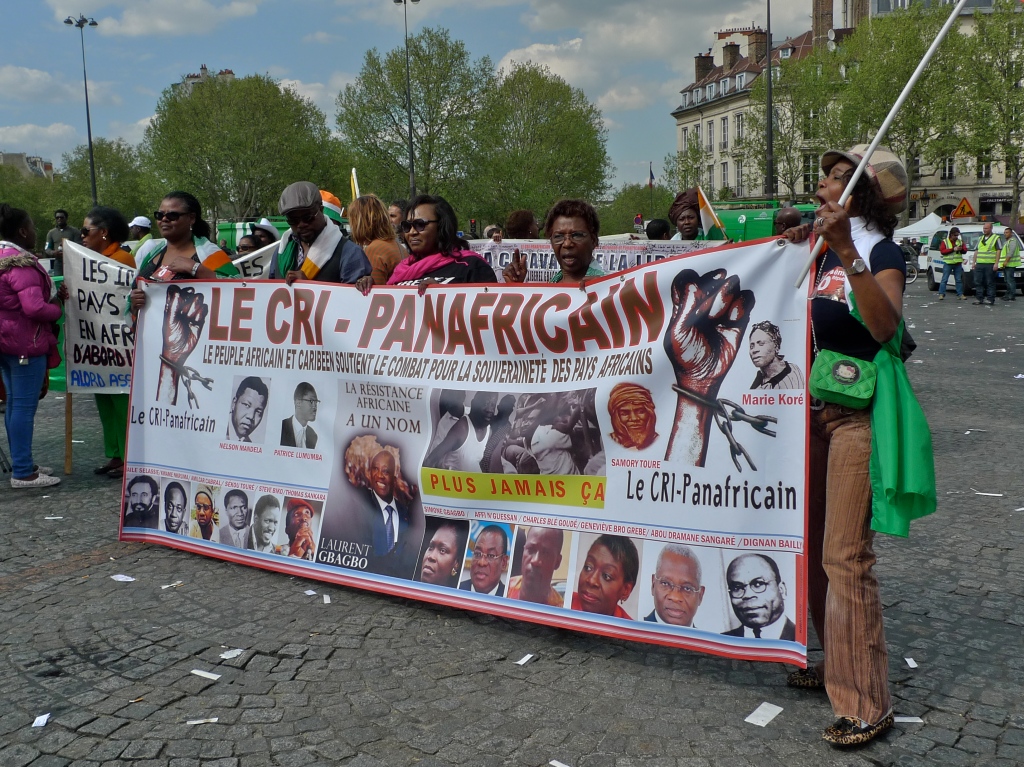 This group of Africans were at the very back of the demonstration and it was them that I joined some three hours after the leading demonstrators had left place de la Bastille. True, unlike most of the other demonstrators, they were not protesting specifically about la finance et l’austérité although they all professed sympathy with the aims of the demonstration.

To be honest, I know very little about Côte d’Ivoire other than what I occasionally glimpse on French TV news and, until Sunday, I wasn’t at all sure who Simone Gbagbo was. But these people clearly felt they had a point to make and they were doing it peacefully and with enthusiasm. In my experience it is quite usual for minority groups with off-piste interests to meld into large demonstrations. 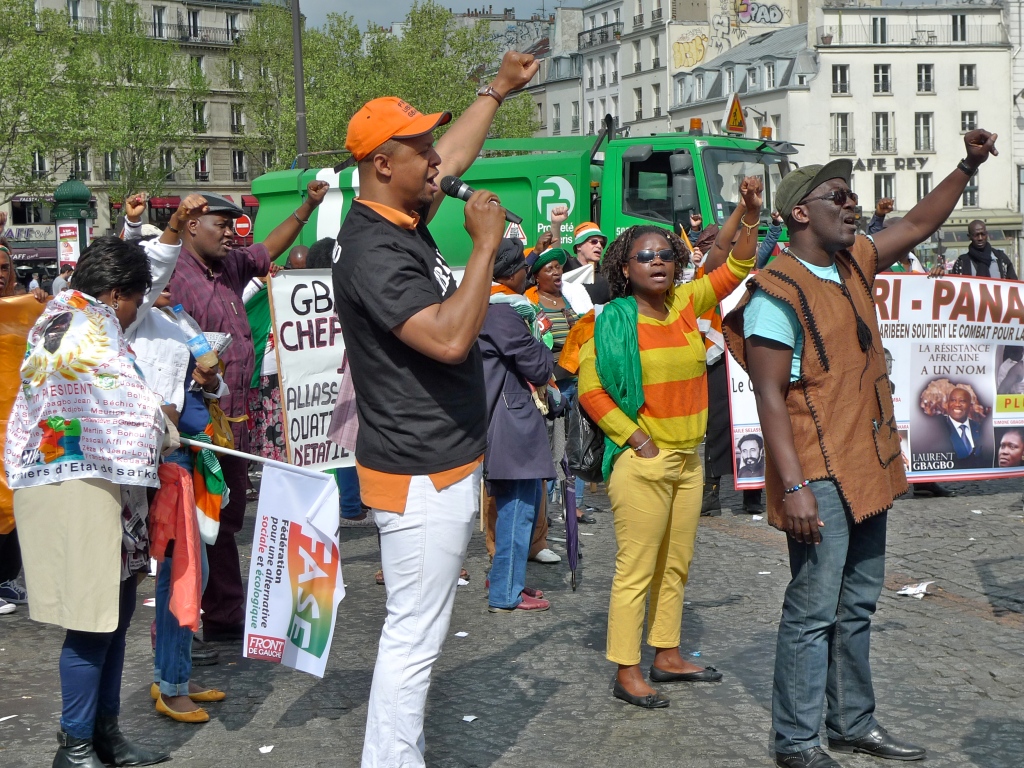 All was well until the time came for them to move off and follow the tail end of the larger demonstration. I had moved slightly ahead of them when I was aware of a scuffle taking place behind me. I turned round to see three or four young white men all sporting Front de Gauche stickers trying to break up the African group. The African stewards were brilliant. They responded swiftly by shepherding the African group away from the trouble and calm ensued. What happened next I simply found beyond belief.

When I turned round to look towards the larger demonstration about twenty or thirty Front de Gauche people, men and women, all white, had linked arms and facing the African group had formed a double cordon to prevent the Africans getting close to the main demonstration. Not only that, but when the Africans remonstrated, the language from the all white cordon was, how shall I say … provocative.

What seemed to have escaped the attention of the all French, all white, cordon was, as one of the Africans told me with passion in her voice, “We are all French citizens!”

I must say that for me, the man in charge of the African group  – the man in the orange cap, white trousers and holding the microphone in the picture above, was the hero of the hour. He showed real leadership, not by responding as vocally as some of his group but by exerting the sheer force of his personality, calmly talking to people and getting the music and the chanting going again.

I must also say, that having seen what I did, any sympathy I may have had for Le Front de Gauche, and I did have some, melted away in an instant as their darker side revealed itself.

The all white, all French, cordon clearly believed that Liberté, Égalité, Fraternité is a wonderful thing … so long as you’re white and French. If you’re black and African then it seems to be quite a different story.