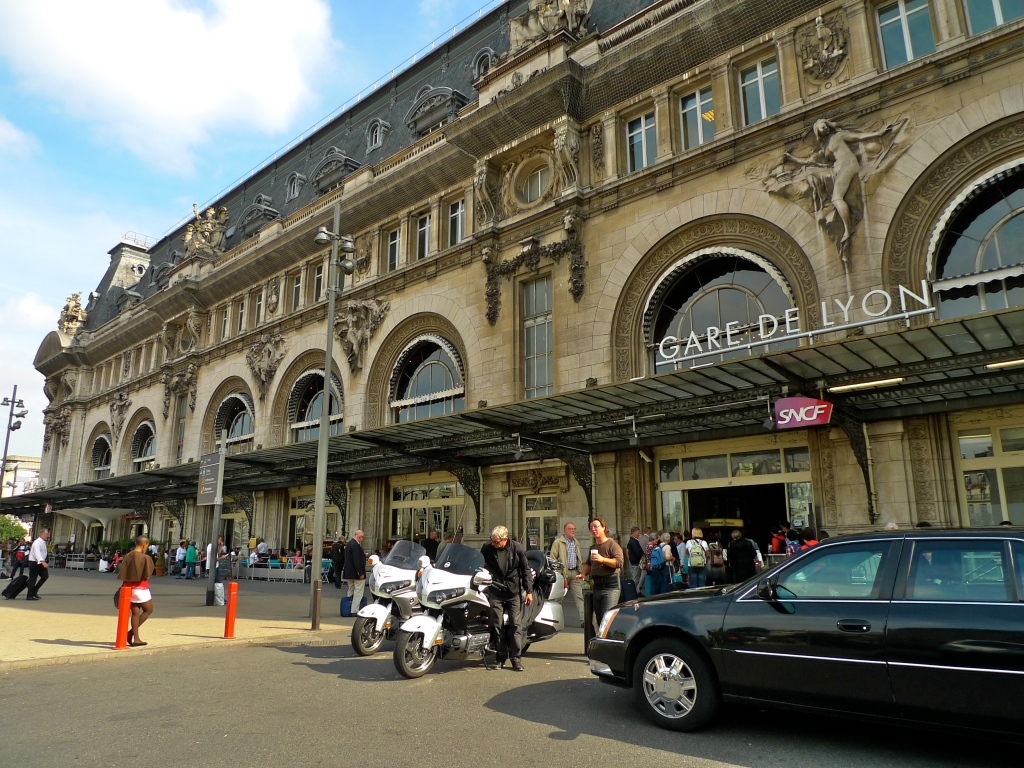 Named after the city of Lyon, the Gare de Lyon is situated in the 12th arrondissement of Paris and it’s the northern terminus of the Paris – Marseille line. From here high-speed TGV trains travel to southern France as well as to Switzerland, Italy and Spain. The station also hosts regional trains as well as an RER and Métro station. 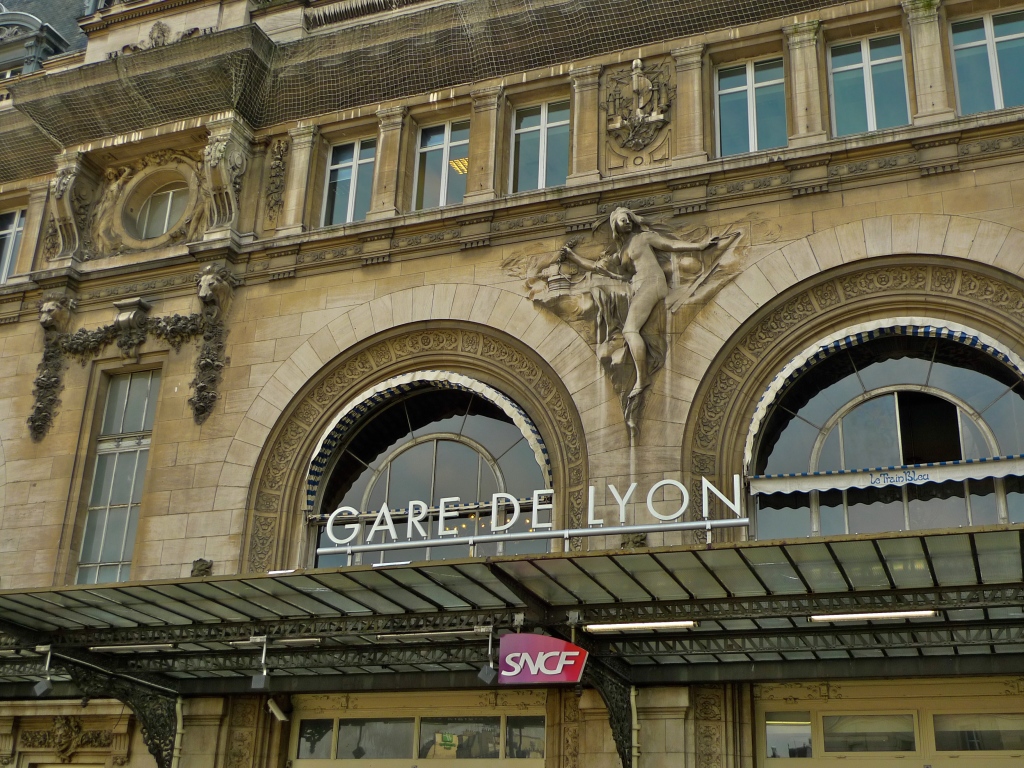 The first station on this site was built in 1852 by the Compagnie des chemins de fer de Paris à Lyon et à la Méditerranée (known as PLM). PLM operated chiefly in the southeast of France with a main line connecting Paris to the Côte d’Azur by way of Dijon, Lyon, and Marseille. This station was a rather drab and low-key affair which, even after being enlarged four times, was continually swamped by the number of passengers passing through. By the 1890’s, with the station unable to cope with the volume of traffic and with the prestigious Exposition Universelle coming up in 1900 it was decided to replace the old station with a new one. The task of building of the new station fell to the French architect Marius Toudoire but the work fell behind schedule and the Gare de Lyon that we know today was eventually opened in 1902. 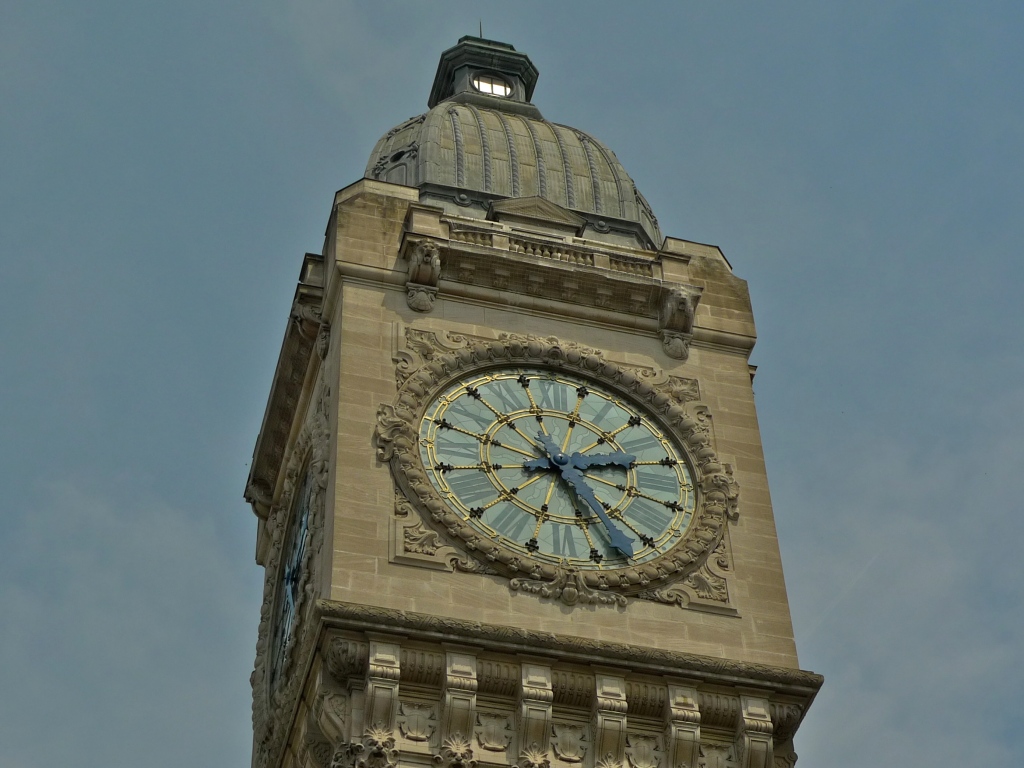 The design of the Gare de Lyon conceals the working station behind a monumental stone frontage with echoes ranging from the French 17th Century to the northern Italian Renaissance the most significant feature of which is the 64 metre high clock tower positioned so as to be visible from Place de la Bastille. 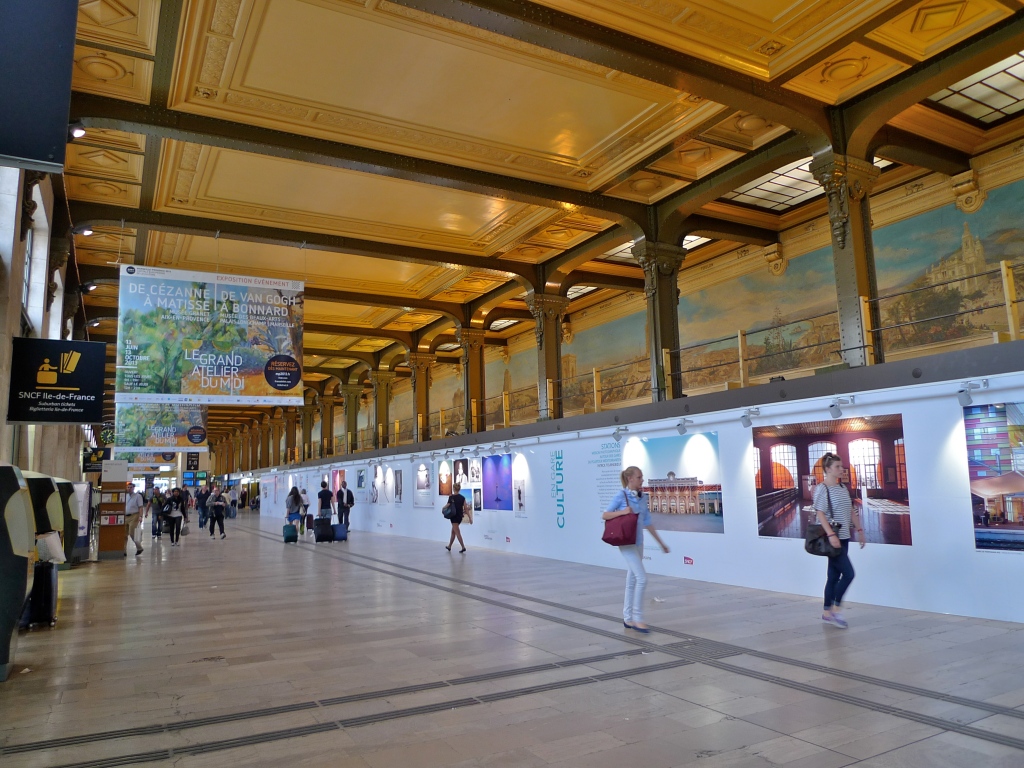 The clock tower may be the most significant feature of the Gare de Lyon on the outside but on the inside that accolade must surely go to the magnificent restaurant, Le Train Bleu, once rather unassumingly called the “Buffet de la Gare de Lyon”. 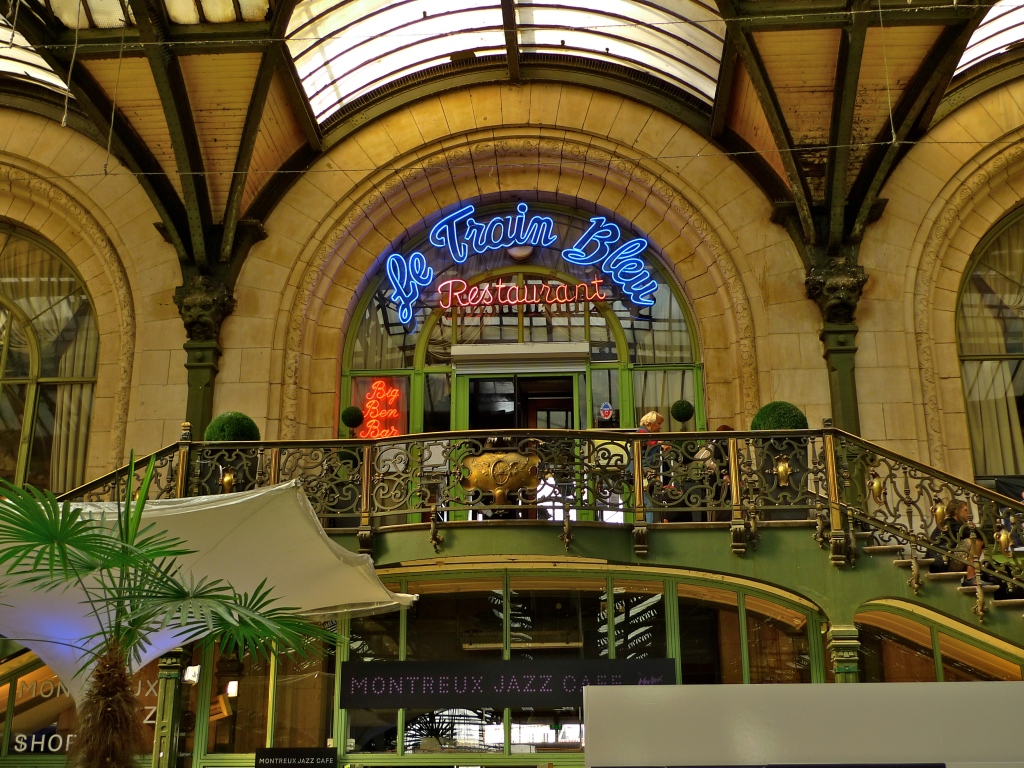 But an ordinary station buffet it most certainly is not! 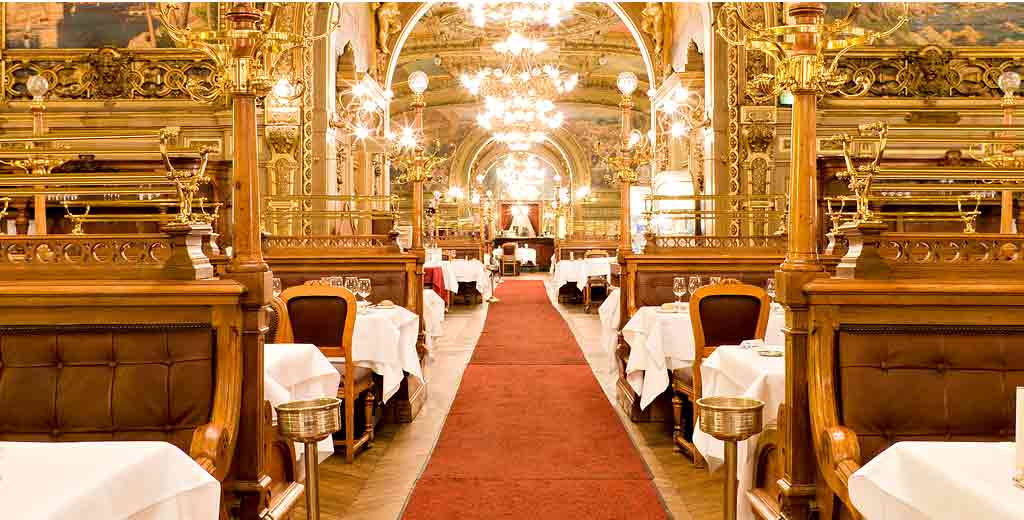 The Buffet de la Gare de Lyon changed its name to Le Train Bleu in 1963 to celebrate the “Paris-Vintimiglia” service, the luxury French night express train, which operated from 1886 to 2003. Colloquially referred to as Le Train Bleu (the Blue Train) because of its dark blue sleeping cars it gained international fame as the preferred train of wealthy and famous passengers between Calais and the French Riviera.

Inside, Le Train Bleu is richly decorated with caryatides, rococo mermaids, exquisite gilding, mirrors and 41 murals painted by 30 renowned artists depicting scenes of Paris at the time of the Exposition Universelle as well as beautiful French landscapes from the route of the PLM railway. 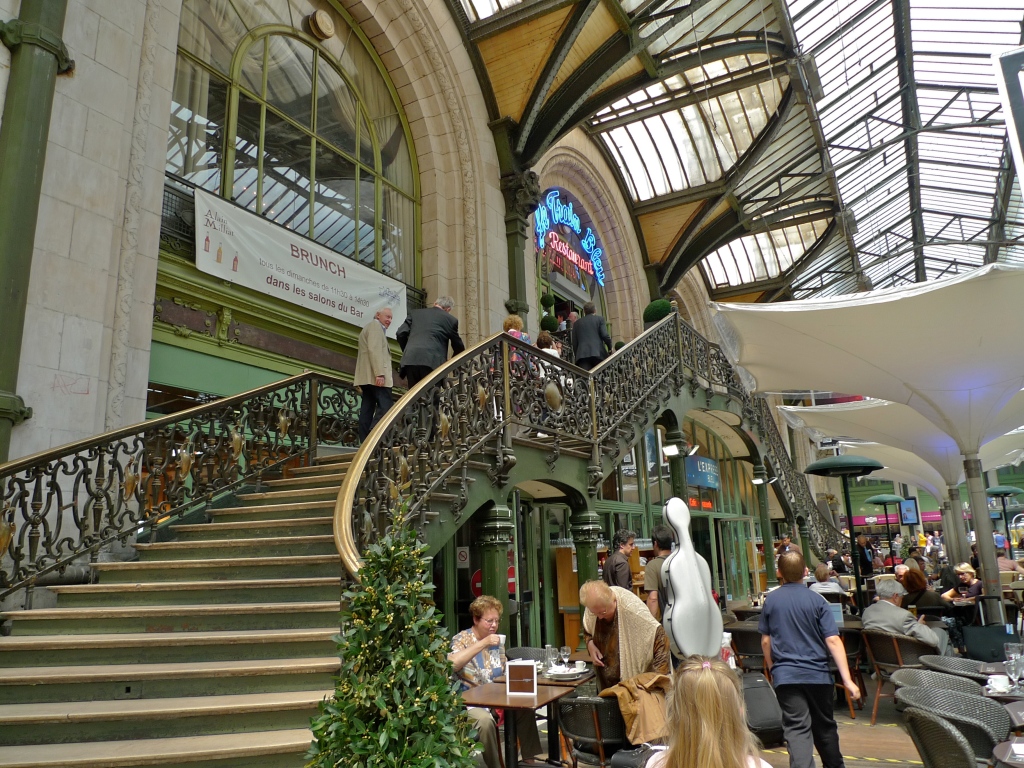 My soundwalk in the Gare de Lyon includes a walk along the regional train platforms, the main station concourse, the TGV train platforms and a walk right up to the Paris – Milan TGV train as the passengers were about to board. 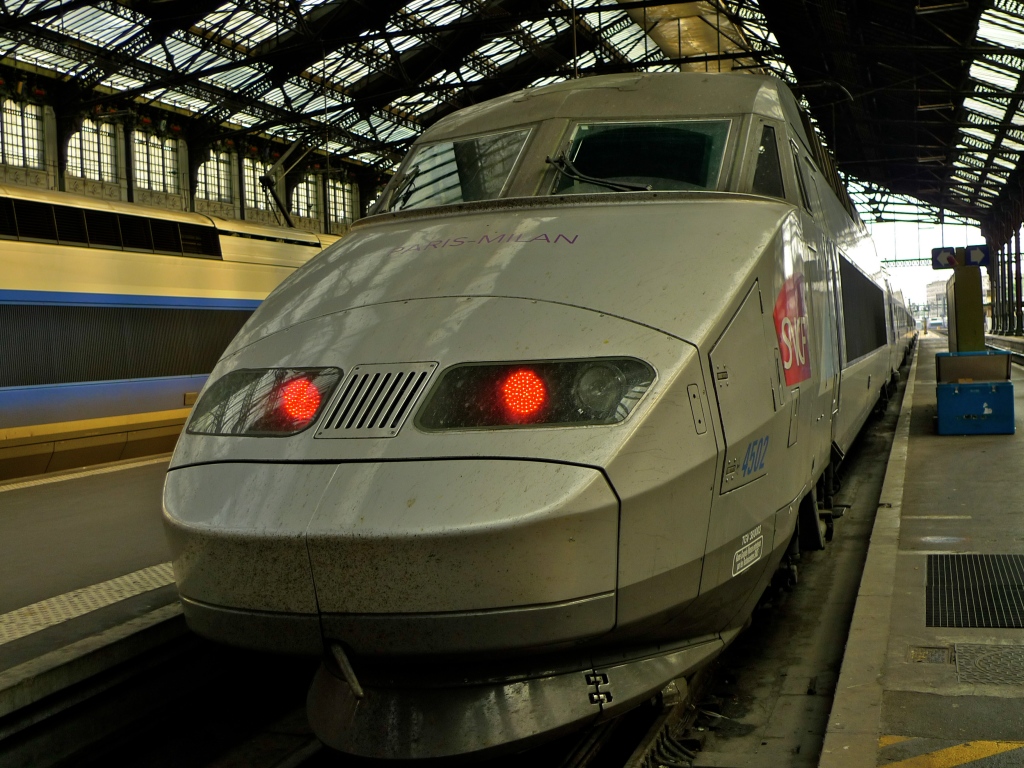 Today, it takes just three hours to travel by TGV from the Gare de Lyon to Marseille, around four hours to Geneva, about seven and a half hours to Milan and about eleven hours to Venice and, with a little forward planning, all at very reasonable prices. 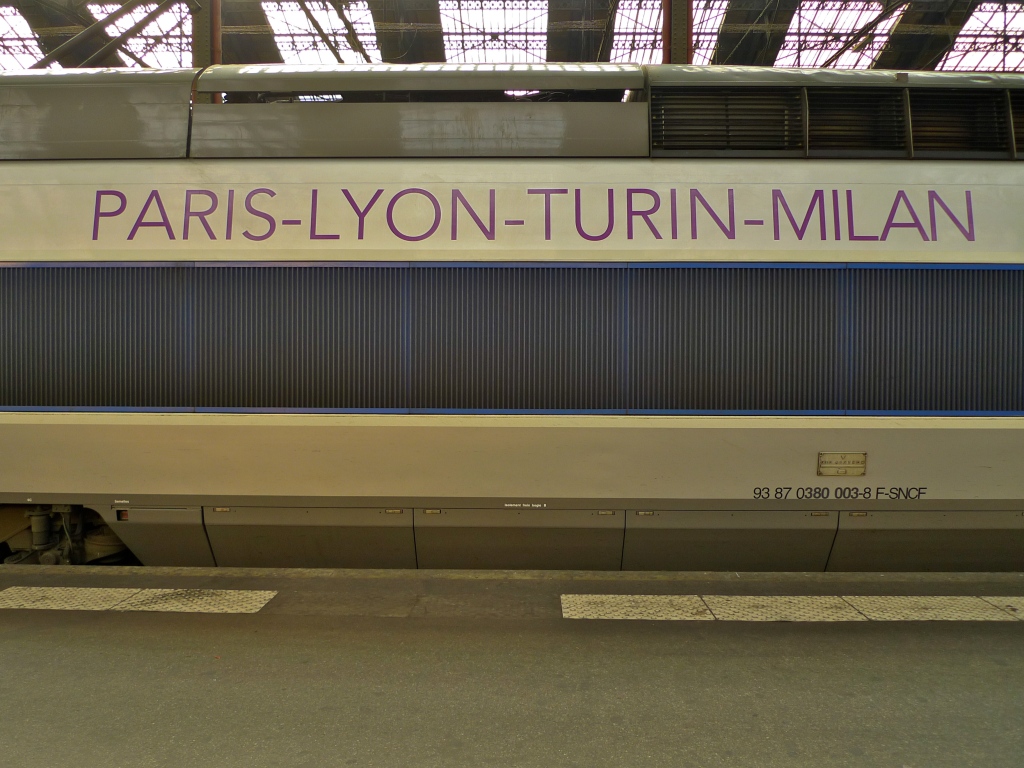 And while you’re listening to the sounds inside the Gare de Lyon and perhaps musing about taking one of these exotic train journeys, here are some more of the sights inside the station: 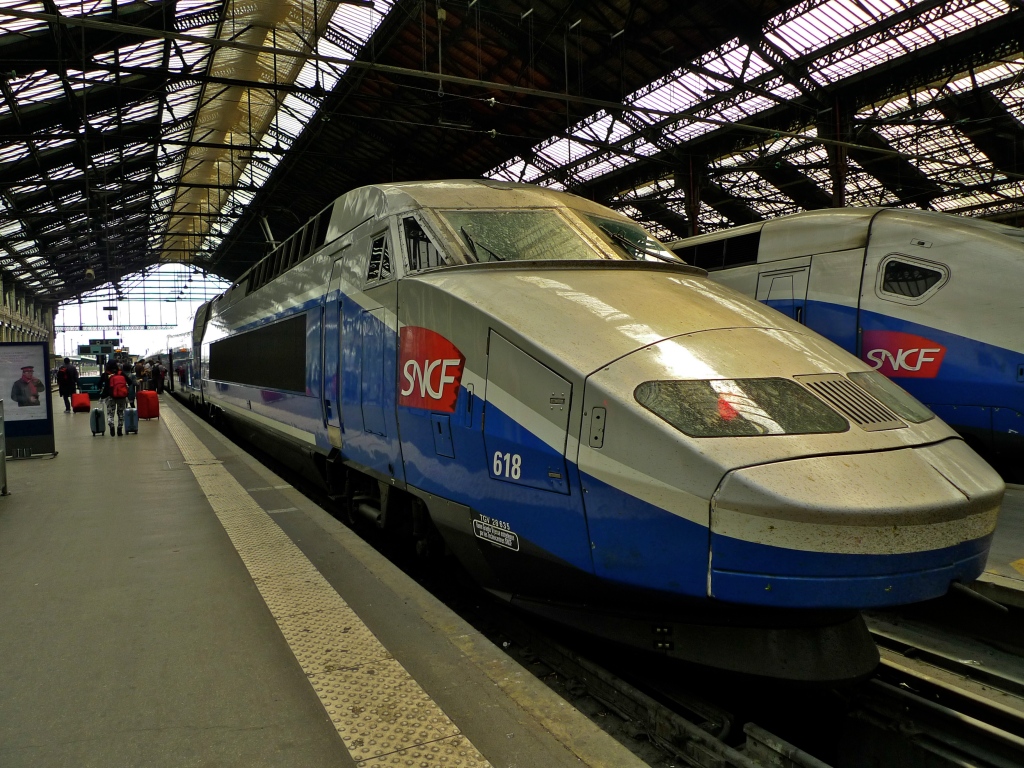 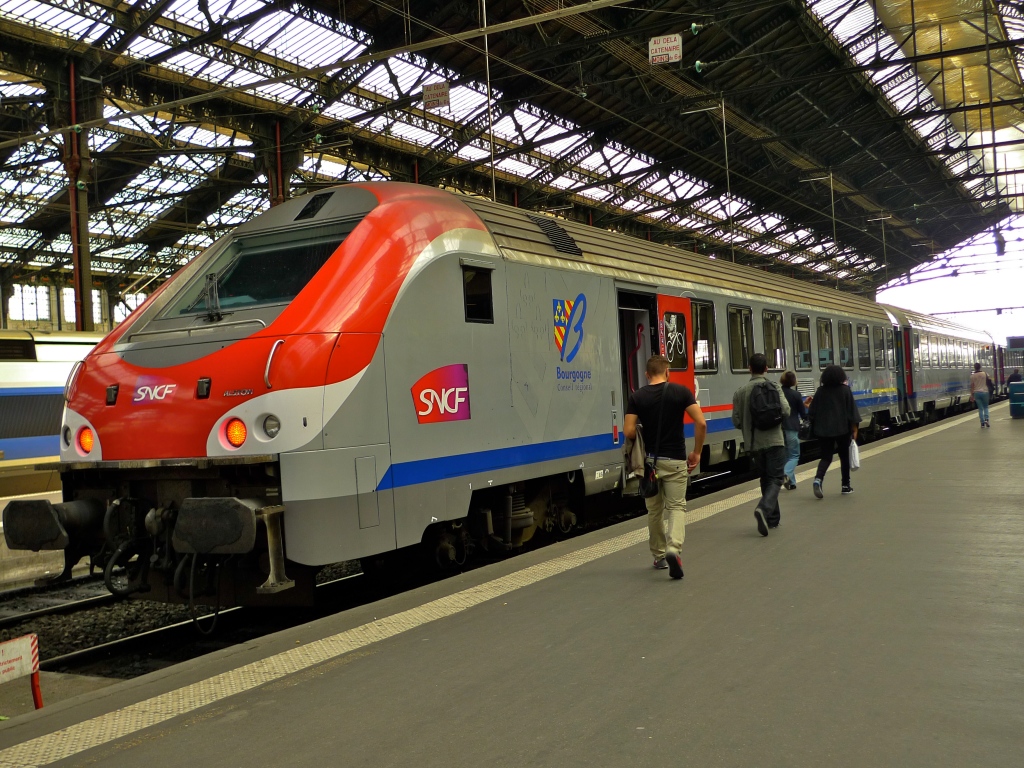 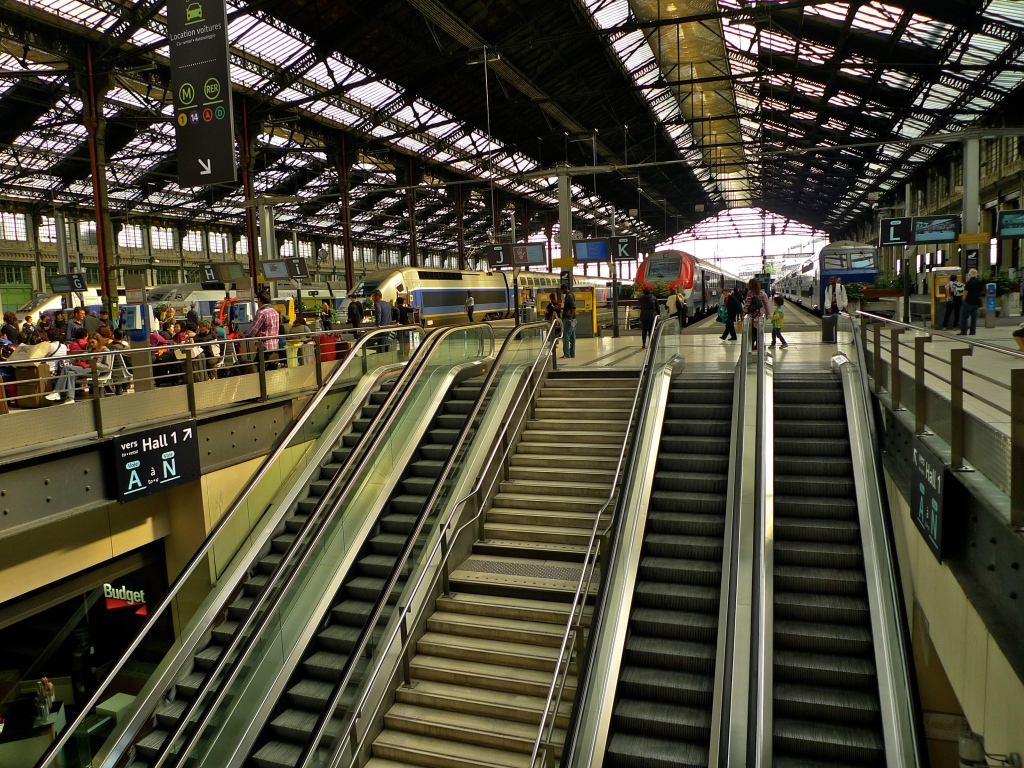 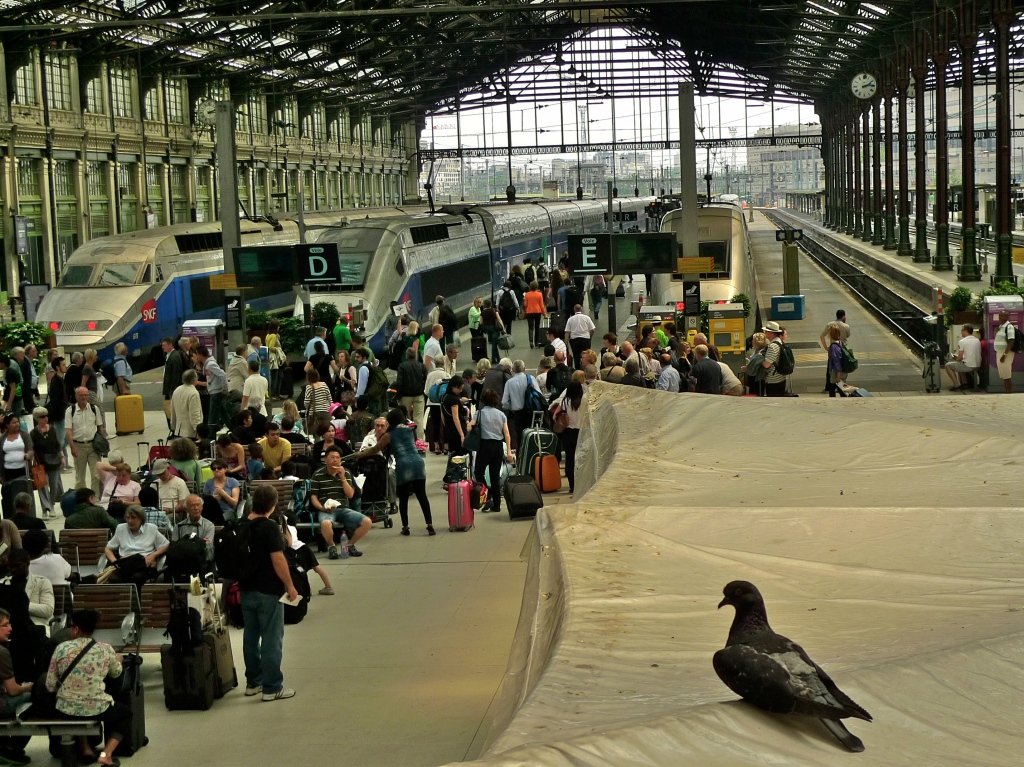 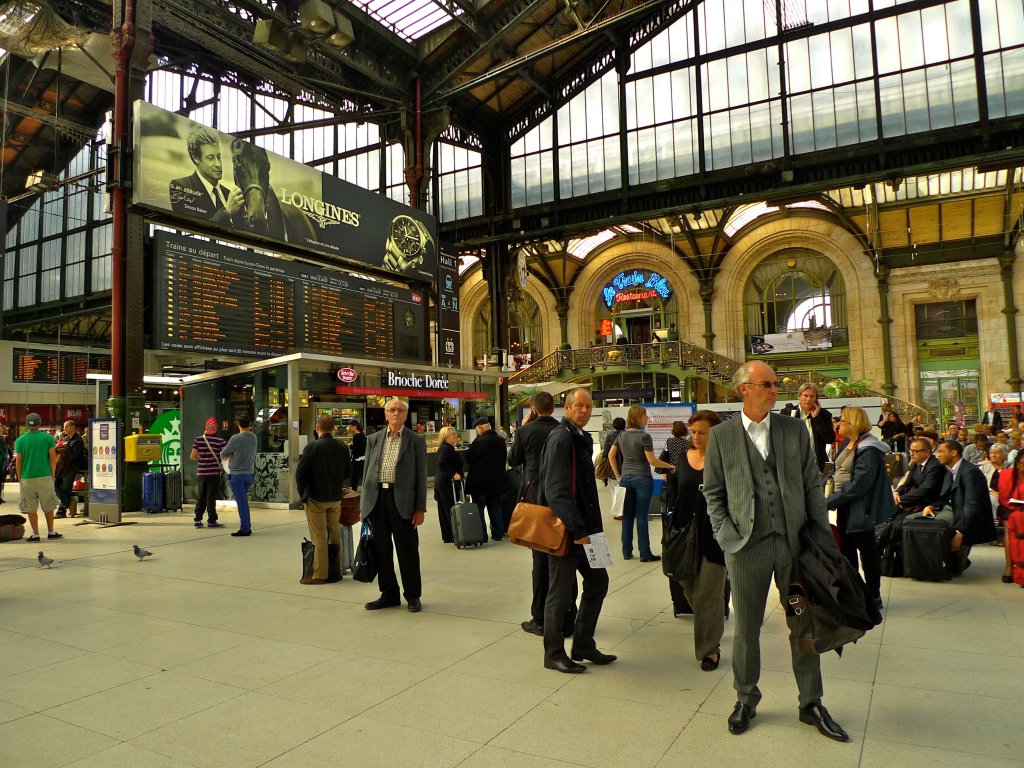 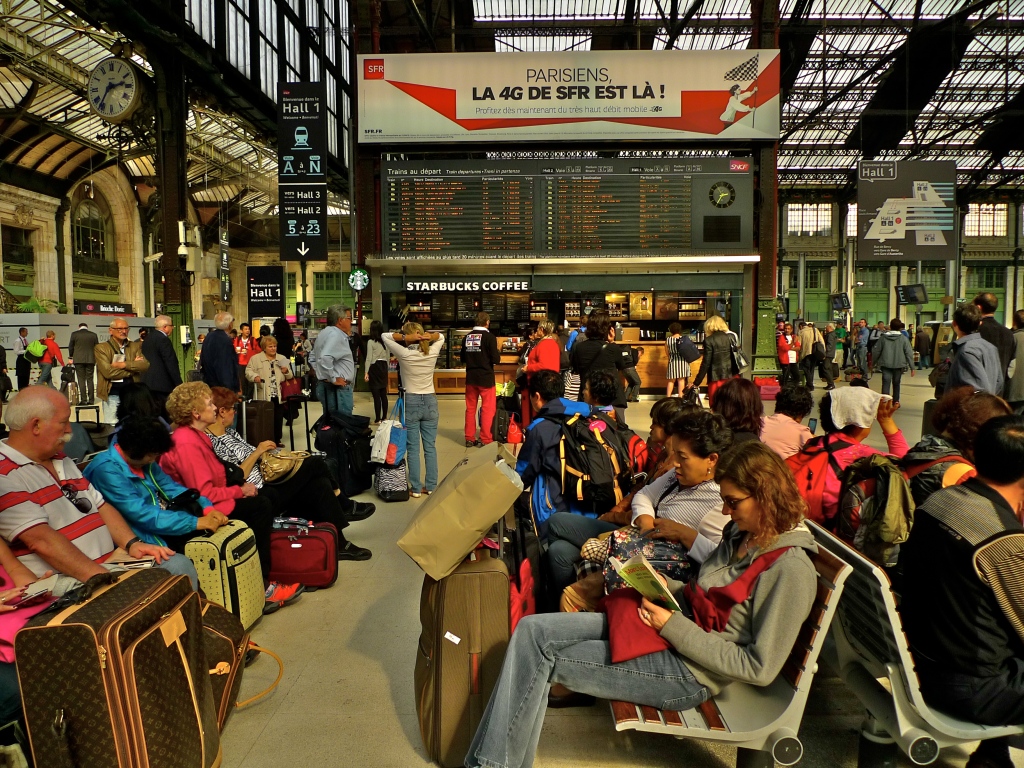 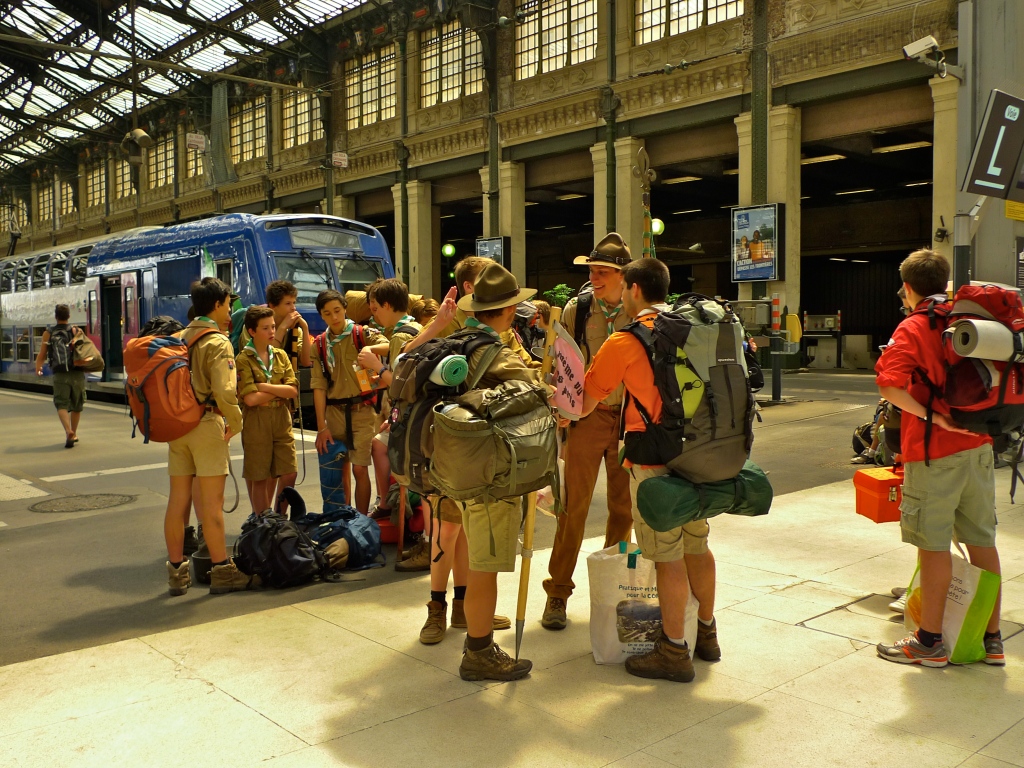