The Marché Barbès and its Sounds

STRETCHING ALONG THE Boulevard de la Chapelle from Barbès Rochechouart Métro station to rue de Chartres, the Marché Barbès is not for the faint hearted. Even getting to the market can be a challenge since some of the market often spills over into the Métro station itself.

From 08.00 to 13.00 on Wednesdays and from 07.00 to 15.00 on Saturdays, the Marché Barbès appears under the overhead section of Métro Line 2 and if you’re looking for a leisurely market with lots of personal space, then the Marché Barbès is not for you.

An assortment of stalls selling clothes, shoes, jewellery and assorted trinkets are clustered at either end of the market but most of the stalls in between are awash with fruit, vegetables, meat and fish.

From end to end, a multi-ethnic sea of people moving at a snail’s pace, or sometimes not moving at all, fills the market. Getting close to a stall to actually buy something requires grit and determination, not to mention judicious use of the elbows. But the effort can be worth it. Not only is this perhaps the busiest market in Paris it’s also one of the cheapest where most of the fruit and vegetables seem to sell for €1/kilo. A running commentary of what’s on sale and for how much resonates around the market as the stallholders cry out vying to outdo each other to catch the attention of customers from the passing tide of people.

All this of course, together with the Métro trains running overhead, makes for a fascinating sound tapestry and so I set off to capture it. Having negotiated my way through the crowd inside the Métro station, I plunged into the throng of people across the street at the head of the market and set sail through what felt like a tsunami of people.

Progress was slow and not without incident, but I made it to the other end more or less unscathed although the relative calm of the rue de Chartres did come as somewhat of a relief. 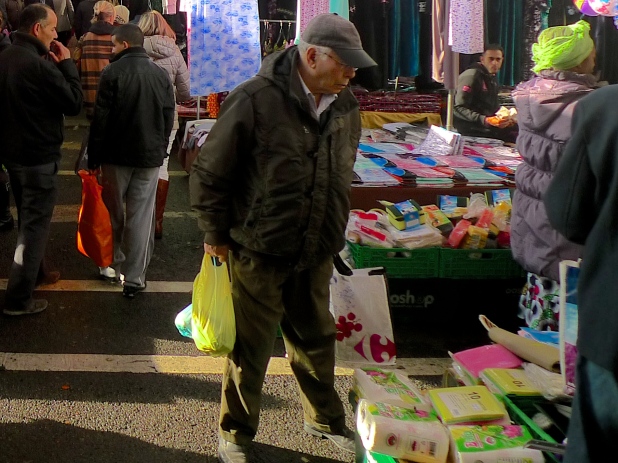 Sounds of the Marché Barbès:

If you can cope with the crowds then the Marché Barbès is well worth a visit and there are certainly some bargains to be had – although I’m still not sure about the watches on sale for €2 each!